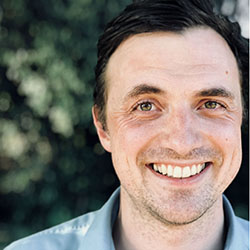 Project Description: In high-Tc superconductors it is thought that the origin of superconductivity is connected to the emergence of spinful objects known as paramagnons. These objects are inseparable from the electrons that form the superconducting condensate itself, and in many ways this is what has made question of the origin of high Tc such an intractable problem. James Analytis suggests a way to find smoking-gun evidence for this mechanism by leveraging techniques that have emerged in the field of spintronics. Along the way he answers two connected questions, both at the forefront of condensed matter research, both with potentially transformative technological impact. (i) How does spin become fractionalized from its charge, and how do we measure the emergent quantum numbers that correctly characterize this state? (ii) How do we leverage this knowledge in order to drive new superconducting states, and if possible increase the transition temperature?

James Analytis joined the faculty at the University of California at Berkeley in January 2013 as the Charles Kittel Chair in condensed matter physics. He received his B.Sc. in physics from Canterbury University in 2001 and his D. Phil. from the University of Oxford. He primarily studies the physics of unconventional superconductors and their relationship to quantum critical points, as well as spin liquids and frustrated magnets. 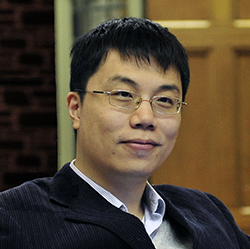 Project Description: Driven far away from equilibrium, the local physicochemical parameters inside a cell vary greatly over short length scales, thus dictating cell functions at a fundamental level. Ke's research aims to unveil the hidden order and physical rules that govern the dynamic interactions between (bio)molecules inside the cell with ultimate sensitivity, spatiotemporal resolution, and functionality. He proposes the creation and application of new microscopy-spectroscopy tools that will uniquely enable the direct visualization and quantification of biomolecule charge states and interactions both in vitro and in living cells at the single-molecule and super-resolution levels. Towards this goal, he is integrating single-molecule spectroscopy, micro/nano-fabrication, and electrokinetics to manipulate and quantify the transient motions of millions of unbound single molecules under the external stimulus. By thus enabling the sub-diffraction-limit spatiotemporal mapping of biomolecule states and interactions, this work will open a new door toward understanding the physical rules that underlie the complex behavior of the cell.

Ke Xu is an associate professor of Chemistry. He received his B.S. from Tsinghua University and Ph.D. from Caltech, and performed postdoctoral research at Harvard University before joining UC Berkeley in 2013. His current research develops new physicochemical tools to interrogate biological, chemical, and materials systems at the nanoscale with extraordinary resolution, sensitivity, and functionality. To this end, his lab takes a multidimensional approach that integrates advanced microscopy, spectroscopy, nanotechnology, and cell biology. Ke has been named a Packard Fellow for Science and Engineering, a Sloan Research Fellow, a Beckman Young Investigator, a Pew Biomedical Scholar, and the C&EN Talented 12.