Dr. Ritchie received a B.A. degree (double first class honors) in physics and metallurgy in 1969, the M.A. and Ph.D. degrees in Materials Science in 1973, and the Doctor of Science (Sc.D.) degree in 1990, all from Cambridge University. Following periods as the Goldsmith's Research Fellow in Materials Science at Churchill College, Cambridge (1972-1974) and as a Miller Research Fellow for Basic Research in Science at the University of California in Berkeley (1974-1976), he joined the faculty in Mechanical Engineering at M.I.T. where he became the Class of 1922 Associate Professor in 1979.  In 1981, he returned to Berkeley where he has been Professor of Materials Science since 1982. He was also Deputy Director of the Materials Sciences Division at the Lawrence Berkeley Laboratory from 1990 to 1994, and Director of the Center for Advanced Materials there from 1987 to 1995.

He has served as a consultant for both government and industry, including for Alcan, Allison, Boeing, Chevron, Exxon,  GE, GM, Google, Grumman Aerospace, Instron, JPL, Northrop, Rockwell, Rolls-Royce, Sunpower, Teledyne, Westinghouse and numerous legal firms.  He has also acted as a consultant in the medical field to Abbott Vascular, ATS Medical, Baxter, Cordis, Carbomedics, Edwards, Guidant, CV Medical, Medstone, NDC, Shiley, Sorin, and St. Jude Medical, on the mechanical integrity of cardiac valves, endovascular stents and other prosthetic devices.  He is a Senior Fellow in the Institute for Advanced Study, City University of Hong Kong, a World Premier Institute Professor at the International Institute for Carbon-Neutral Energy Research, Kyushu University, Japan, a member of the Rolls-Royce Materials, Manufacturing & Structures Advisory Board in the U.K., and has served on several National Research Council Committees including “Advanced Space Technology” and “Small Spacecraft Technology”.

Dr. Ritchie is well known for his research in the fields of materials science, fracture mechanics and particularly fatigue, having authored or co-authored over 800 papers and edited 19 books in the technical literature; he has a citation “h-index” of 97 on Web of Science [104 on Scopus, 121 on Google Scholar]). He is a Member of the National Academy of Engineering, a Foreign Member Fellow of the Royal Society (FRS) and of the Royal Academy of Engineering (FREng) in the U.K., and a Foreign Member of the Russian Academy of Sciences, the European Academy of Sciences, and the Royal Swedish Academy of Engineering Sciences.  He has also been the recipient of numerous other awards, including the Journal of Engineering Materials & Technology Best Paper Award from the American Society for Mechanical Engineers (ASME) in 1979, the Marcus A. Grossmann Award from the American Society for Metals (ASM) in 1980, the Most Outstanding Scientific Accomplishment Award from the U.S. Department of Energy in Metallurgy in 1982 and in Ceramics in 1989, the Champion H. Mathewson Gold Medal from the Metallurgical Society of AIME (TMS) in 1985, the George R. Irwin Medal from the American Society for Testing and Materials (ASTM) in 1985, the E-9 Award for the Best Presented Paper on Fatigue from ASTM in 1986, the Curtis W. McGraw Research Award from the American Society for Engineering Education (ASEE) in 1987, the Rosenhain Medal from the Institute of Materials (London) in 1992, the Structural Materials Distinguished Materials Scientist/Engineer Award from TMS in 1996, the ASTM Journal of Testing and Evaluation Award for Most Outstanding Article in 1998, the Nadai Medal from ASME and the ASTM Fatigue Lectureship in 2004, the Wöhler Medal from European Structural Integrity Society in 2006, the A. A. Griffith Medal from the Institute of Materials (London) in 2007, the Sir Alan Cottrell Gold Medal from the International Congress on Fracture and Alexander von Humboldt Senior U.S. Scientist Award in 2009, and the Institute of Metals/Robert Franklin Mehl Award from TMS, the Edward DeMille Campbell Memorial Lectureship Award from ASM, the A. Cemel Eringen Medal from the Society of Engineering Science in 2010, the David Turnbull Award from the Materials Research Society (MRS) in 2013, the Acta Materialia Gold Medal and the Klaus Halbach Award for Innovative Instrumentation in 2014, the Morris Cohen Award from TMS in 2017, the William D, Nix Medal from TMS in 2020, and the Gold Medal from ASM in 2021.  He was the Van Horn Distinguished Lecturer (Case Western Reserve University) in 1997, a Southwest Mechanics Lecturer in 1997-98, RPI’s IBM Distinguished Lecturer in 2004, the Tablot Lecturer in Theoretical & Applied Mechanics (University of Illinois at Urbana-Champaign) and the Lee Hsun (Xun Ke) Lecturer (Institute of Metals Research, China) in 2006, the Dow Lecturer at Northwestern University in 2007, the Penner Lecturer at UC San Diego in 2008, the Den Hartog Memorial Lecturer at MIT and the Brotz Lecturer at Marquette University, both in 2011. He was also named as one of America's Top 100 Young Scientists by Science Digest magazine in 1984, chaired the Gordon Conference on Physical Metallurgy in 1992, was an Honorary Visiting Professor at the University of Plymouth, U.K. (1994-2004) and now at the University of Bristol, U.K., and is an Honorary Professor of Beihang University, Xi’an Jiaotong University and the South Central University Changsha, in China, and the University of Birmingham in England. He was President (1997-2001) and is an Honorary Fellow of the International Congress on Fracture.  He is also a Fellow of the Materials Research Society (MRS), the Institute of Physics (FInstP), the American Society for Materials (ASM), the American Society for Mechanical Engineers (ASME), the American Ceramic Society, and the U.K. Institute of Materials (IOM3).  He is also a Fellow and Life Member of TMS and a chartered engineer (CEng.) in the U.K. 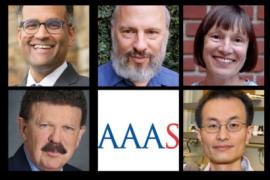 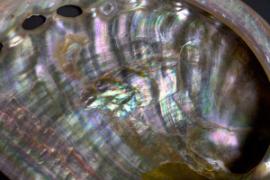 Despite working from a limited selection of components and at ambient temperature, nature has managed to craft a wide range of incredibly diverse materials with astonishingly elegant and complex architectures. 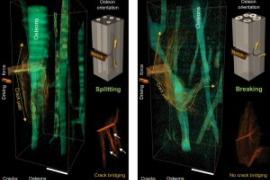 Of Aging Bones and Sunshine 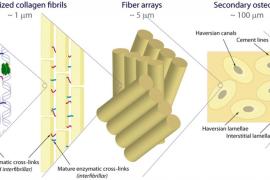 Despite working from a limited selection of components and at ambient temperature, nature has managed to craft a wide range of incredibly diverse materials with astonishingly elegant and complex architectures.

Of Aging Bones and Sunshine