Gary Karpen is a professor of Cell and Developmental Biology.  Research in the Karpen Lab is focused on understanding inheritance, chromatin structure, and the dynamic organization of chromosomes in the nucleus, with a particular emphasis on centromeres, heterochromatin, DNA repair and epigenetics. Most of their studies have focused on the fruit fly Drosophila melanogaster as a model for chromosome function in metazoans, which allows us to address mechanisms in animals by synergistically combining molecular, genetic, cell biological and biochemical approaches. They also examine the relevance of their findings to human nuclei and chromosomes, and have demonstrated surprising similarities between these evolutionarily-distant species. Since defective chromosome behaviors contribute to cancer, birth defects and aging, they ultimately hope to apply this knowledge to improve diagnosis and treatment of human diseases.

In recent years they have elucidated the roles of condensate formation (phase separation) on the 4D organization of chromatin domains, the impact of chromatin states on DNA repair effectiveness and pathway choice, revealed new aspects of genome and protein evolution, and discovered a novel role for RNAs generated by highly repeated satellite DNAs. Since defective chromosome behaviors contribute to cancer, birth defects and aging, they ultimately hope to apply this knowledge to improve diagnosis and treatment of HC-related human diseases.

Mechanisms and impact of phase separation in the nucleus. Their major efforts have been focused on the biophysics of chromatin domains and their impact on nuclear architecture and genome functions. Specifically, they showed that the 3D heterochromatin (HC) domain is a condensate that displays liquid properties and forms by phase separation mechanisms (Strom et al. Nature 2017). This work generated a fundamentally different conceptualization of how chromatin domains in general are formed and function, and generated much excitement in the field. Phase separation and emergent properties provide novel mechanisms for biological regulation at multiple scales, due to exquisite sensitivity to relatively minor changes in molecule concentrations, temperature, ionic environment, and post-translational modifications (PTMs). Exciting possibilities include liquid fusions driving contact between distant genomic regions (Lee et al. ELife 2019), spreading of chromatin states through ‘wetting’ rather than progressive histone modification, and regulation of genome functions such as repair, replication and transcription by moving genomic regions into or out of domains. They continue to study the molecular mechanisms and interactions that drive phase separation and domain formation, and perhaps most importantly if and how the emergent biophysical properties impact genome functions  in vivo, using advanced imaging, chemical, biochemical, and experimental and theoretical biophysical approaches.

Regulation of DNA repair by chromatin and nuclear dynamics. Repeated DNAs enriched in heterochromatin (HC) pose significant challenges to genome stability. For example, homologous recombination (HR) involving double-strand breaks (DSBs) in repetitive sequences generates chromosome aberrations that cause cell death and contribute to cancer progression. They challenged prevalent views by revealing that a novel, dynamic mechanism regulates HR in HC (Chiolo et al., Cell 2011), and defined the proteins and pathways required for relocalization of DSBs outside the HC domain and completion of HR repair at the nuclear periphery (Ryu et al. NCB 2015). They proposed that spatially separating repeats with DSBs from the rest of the HC reduces the probability of aberrant exchanges that cause genome instability (e.g., translocations) and promotes less harmful HR repair from homologs or sister chromatids. They also developed inducible single DSB systems that, for the first time, allowed direct comparisons of repair pathways and products, foci dynamics and regulatory mechanisms in HC and euchromatin (EC) in animal tissues (Janssen et al., G&D 2016). Overall, they conclude that despite extensive differences in chromatin composition, both the HR and NHEJ pathways are utilized to a similar extent for EC and HC DSB repair, and HC DSBs can switch between NHEJ and HR utilization. Based on recent results (Janssen, Colmenares et al. G&D 2019), they hypothesize that DSB relocalization, repair protein recruitment and pathway choice require removal of HC chromatin marks and replacement with ‘active’ marks (e.g. acetylations). Thus, their current and future efforts are focused on using single DSB systems in flies and human cells to understand how chromatin modifications and modifiers regulate repair dynamics and pathway utilization, and how they differ in HC and EC.

Evolution of centromeres and heterochromatin

Unfortunately, they cannot use human cenhaps identified through bioinformatic methods to perform direct experimental interrogations of impact on chromosome and organismal functions. Thus, they also identified highly diverse cenhaps from Drosophila populations isolated from across the world; they display highly significant associations (e.g. with clinal variation), and thus hold promise for studies directly linking haplotypes to functional differences. Ongoing collaborative studies will allow us to propose and test population genomic models and mechanistic explanations of the forces that shape variation in the pericentromeric regions, within and between species.

RNAs generated from a simple repeat (AAGAG) are required for spermatogenesis. Tandemly-repeated short DNAs, or satellites, are enriched in HC regions of eukaryotic genomes; although some satellites are transcribed, they lack direct evidence that specific satellite RNAs are required for normal organismal functions. They observed that satellite RNAs derived from AAGAG tandem repeats (4% of the genome) are transcribed in many cells throughout Drosophila development, enriched in neurons and testes, localize to PCH domains, and required for viability. Strikingly, they find AAGAG transcripts are necessary for male fertility, and that AAGAG RNA depletion results in defective histone-protamine exchange, sperm maturation and chromatin organization (Mills et al. Elife 2019). Since these events happen late in spermatogenesis when the transcripts are not detected, they speculate that AAGAG RNA in primary spermatocytes ‘primes’ post-meiosis steps for sperm maturation. In addition to the surprising discovery of essential functions for AAGAG RNAs, comparisons between closely related Drosophila species suggest that satellites and their transcription evolve quickly to generate new functions. They are currently investigating how fast satellite evolution can be reconciled with encoding essential functions, and potential roles for satellite transcripts in health, disease and evolution. 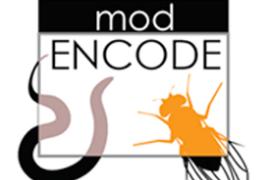 Learning to Read the Genome

LBNL and UC Berkeley researchers have gone beyond the mere genetic sequence of the fruit fly to reveal the RNA and chromatin structures that tell us how cells work. The new analysis of the fruit fly and roundworm genomes was performed by the modENCODE team.

Learning to Read the Genome
See all

Learning to Read the Genome

LBNL and UC Berkeley researchers have gone beyond the mere genetic sequence of the fruit fly to reveal the RNA and chromatin structures that tell us how cells work. The new analysis of the fruit fly and roundworm genomes was performed by the modENCODE team.