Simons Institute for the Theory of Computing

The Simons Institute for the Theory of Computing is the world's leading venue for collaborative research in theoretical computer science. Established on July 1, 2012 with a grant of $60 million from the Simons Foundation, the Institute is housed in Calvin Lab, a dedicated building on the UC Berkeley campus. The Simons Institute brings together the world's leading researchers in theoretical computer science and related fields, as well as the next generation of outstanding young scholars, to explore deep unsolved problems about the nature and limits of computation.

The Institute aims to promote fundamental research on the foundations of computer science, as well as to expand the horizons of the field by exploring other scientific disciplines through a computational lens. This second and distinctive goal is motivated by the fact that natural phenomena in many scientific fields (including mathematics, statistics, physics, astronomy, biology and economics), or the models those fields have developed for these phenomena, are intrinsically computational in nature—from chemical processes in living cells to the self-organizing behavior of complex systems of interacting particles, to mechanisms governing human evolution and the collective behavior of competing agents in an economy. The insights gained from such explorations often reflect back to the theory of computation, opening new directions and advancing our understanding of fundamental issues in complexity theory and algorithms.

The Institute's core activities revolve around its research programs on specific topics; a program typically runs for one semester, and there are usually two concurrent programs each semester. Run by a small group of organizers, a program typically includes 60-70 long-term participants (a mix of senior and junior researchers), with additional short-term visitors attending workshops during the semester. Junior participants are supported by our Fellowships program.

Program topics are intended to span all areas of theoretical computer science, as well as its connections to other scientific disciplines; the Institute particularly aims to identify programs that can potentially lead to substantial advances in the field, rather than promoting "business as usual." Proposals for programs are solicited from the worldwide theoretical computer science community and may be submitted at any time. Proposals are reviewed by the Institute's Scientific Advisory Board, which meets twice a year. Proposal selection normally occurs approximately two years in advance of the start of a program. 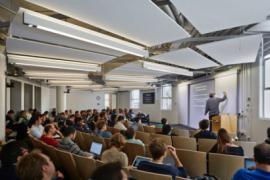 The National Science Foundation (NSF) and Simons Foundation today (Aug. 25) awarded $10 million to a UC Berkeley-led program to gain a theoretical understanding of deep learning, which is making significant impacts across industry, commerce, science, and society. 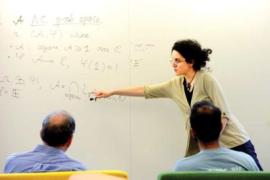