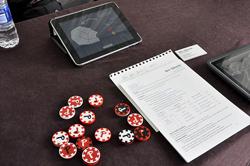 "At the Social Apps Lab, we aim to harness the participatory and creative energies of game-play to address social issues," says James Holston, "because when it comes to participation, the key question is motivation: How do you get people to do something?"

The Social Apps Lab creates free applications based on playful ways to get users to explore their environments, engage local issues, promote public health, and become active citizens. With support from CITRIS, the Division of Social Sciences, and the Division of Arts and Humanities at UC Berkeley, their current projects include tackling dengue fever, reducing asthma, and engaging citizens in local urban issues.

Each year, dengue fever infects about 50 million people, and 2.5 billion are at risk from the virus. Dengue is on the rise in urban areas around the tropical world, but it is largely preventable, according to Holston, a UC Berkeley political anthropologist and co-director of the Social Apps Lab at CITRIS. Holston, co-director Greg Niemeyer, and their colleagues at the lab are developing a cell phone app that uses crowdsourcing and local knowledge to help urban residents address this global problem.

Dengue is caused by a virus transmitted through the bite of an infected mosquito. Eliminate the mosquitoes and you prevent the disease. But the insects breed quickly in stagnant water, and the uncovered barrels, buckets, discarded tires, and ditches common in densely populated urban areas make for perfect mosquito habitat.

Draining every source of stagnant water in a city like São Paulo is an impossible job for centralized government agencies, says Holston, who is working with government, industry, and university partners to launch the new application, DengueTorpedo, in Brazil.

It works this way: when a user comes upon a potential mosquito breeding site, that user can use the sms-based app to log it in, fix it on a local map, and upload a photograph. Players will get points for identifying breeding locations as well as for eliminating them and for recruiting new players. Those points can be traded for prizes like upgraded cell phones or free texting and cell-minutes.

In addition to the technical challenge of making a game that works on basic cell-phone technology, which is ubiquitous in Brazil, the project also requires an understanding of the political, economic, and cultural context in which it is to be played. Anthropologists, health researchers, local residents, entrepreneurs, phone carriers, and politicians have all collaborated on DengueTorpedo. DengueTorpedo will be launched as a pilot project in two neighborhoods of São Paulo’s urban periphery during Brazil’s 2011/2012 dengue fever season.

A sister project is unfolding in Nicaragua, led by the Social Apps Lab in association with Eva Harris, professor of infectious disease in the UC Berkeley School of Public Health, and Josefina Coloma, the Executive Director of the Sustainable Sciences Institute. Similar game templates will be applied to other causes as well. "Once you work out the basic mechanism," says Holston, "it can be applied to many problems."

Identifying sources of asthma-inducing pollution
In collaboration with researchers at UC Merced and the Berkeley Institute of the Environment, the Social Apps Lab is also developing Pwning Asthma Triggers. Like DengueTorpedo, Pwning Asthma will recruit local residents to play a cell-phone-based game to promote public health. In this case, users will identify sources of asthma-inducing industrial pollution in Oakland and agricultural pollution in the Central Valley.

Although this app clearly has a public health focus, like all Social Apps Lab games, it also strives to give democratic voice to people typically under-represented in civic discussions. If, through Pwning Asthma, young people can track the causes of their asthma, and if demonstrating the political and economic significance of this map is part of the game, they may become much more involved.

Holston and Niemeyer are especially interested in helping disenfranchised members of society to become more engaged participants. "So many productive Californians are excluded from political participation in the communities in which they live and work because they are not U.S. citizens or because they are 'undocumented'. People tend to focus on the costs of those residents; I think it would be better to ask what American democracy is losing by not engaging them," says Holston. 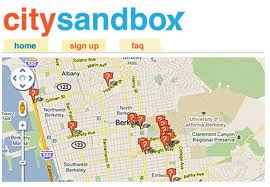 Broad participation is the key to any democracy worthy of the name. A simple but powerful tool called CitySandbox (available at citysandbox.com) aims to make meaningful participation easier for everyone, starting in the city of Berkeley. In June, Holston and Niemeyer launched the map-based website (which is still in a beta version) to bridge the gap between local neighborhood knowledge and larger political institutions.

Berkeley city councilmember Gordon Wozniak, whose District 8 includes much of the UC Berkeley campus, says that getting feedback from his constituents is a major challenge. Wozniak hopes to employ CitySandbox to strengthen participation around Berkeley, especially among students who are accustomed to using their computers and phones to engage, says Holston.

Constituents using CitySandbox can flag sites on the map and pose questions to other users. 'For example," Holston says, "why is the lot at Harrison and 6th Street empty and unused?" Other users can reply with answers to questions (for example: "That lot is owned by the City following foreclosure several years ago," or "I was wondering the same thing; let’s do something about it") and they can also pose "challenges," such as “Come up with a plan to make a community garden on this empty lot.” Users can then upload proposals and vote on them. The website platform lets users create "events," such as organizing a meeting with a city council member to present their plans for the community garden.