Rachel Morello-Frosch is a Professor in the Department of Environmental Science, Policy and Management and the School of Public Health at UC Berkeley. For over 20 years, her research has examined social determinants of environmental health among diverse communities with a focus on inequality, psychosocial stress and how these factors interact with environmental chemical exposures to produce health inequalities. Much of her work has examined this environmental justice question in the context of climate change, ambient air pollution, exposures to environmental chemicals and effects on fetal growth and developmental outcomes, often using community-based participatory research methods for data collection. In collaboration with communities and scientists, Dr. Morello-Frosch has also developed science-policy tools for assessing the cumulative impacts of chemical and non-chemical stressors to improve regulatory decision-making and advance environmental justice. In addition to her scientific articles, Rachel is a co-author of Contested Illness: Citizens, Science and Health Social Movements. Her research is supported by NIH, NSF, Cal-EPA, the California Breast Cancer Research Program and private foundations. 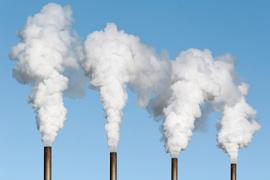 California residents not benefiting from improved air quality during first 3 years of cap-and-trade program, while other states show reductions in greenhouse gas.

California residents not benefiting from improved air quality during first 3 years of cap-and-trade program, while other states show reductions in greenhouse gas.

Please note: The views and opinions expressed in these articles are those of the authors and do not necessarily reflect the official policy or positions of UC Berkeley.
July 10, 2019

San Francisco Chronicle
Steve Rubenstein
Some of the San Francisco firefighters who helped fight the 2017 Tubbs Fire in Sonoma and Napa counties had higher levels of mercury and other dangerous chemicals in their blood afterwards, largely due to inadequate equipment, according to preliminary results of a study co-authored by environmental science, policy, and management professor Rachel Morello-Frosch. She warns that the firefighters' levels of toxic chemicals could have been higher if they'd been tested earlier. While she says that none of the firefighters in the study displayed symptoms of cancer, she also notes: "Cancer takes a long time to develop, and it would be difficult to say if cancer was caused by the Tubbs Fire or by a career in firefighting." Other stories on this topic appeared in the Napa Valley Register, SF Weekly, San Francisco Examiner, KQED Online, and KPIX TV--link to video.
FullStory (*requires registration)