Heather Gray is an experimental particle physicist working on the ATLAS experiment at the Large Hadron Collider (LHC) just outside Geneva in Switzerland. She has broad interests in particle physics, but the primary focus of her research is the Higgs boson -- the most recently discovered elementary particle, the only known elementary scalar of nature and the final piece of the remarkably successful Standard Model. However, this discovery leaves many important questions unanswered and uncovers further questions. The Higgs is profoundly different from all other elementary particles, relates to the most obscure sectors of the Standard Model and is linked to some of the deep questions, so it might prove to be a portal to find new physics. She studies the properties of the Higgs boson and, in particular, how it interacts with different types of quarks, including top, bottom, and charm quarks.  Other research interests include the development of track reconstruction algorithms for particle physics. A theme throughout her research is applications of machine learning.

She collaborates with Professors Shapiro and Wang at UC Berkeley and with scientists at in the ATLAS group at Lawrence Berkeley National Laboratory (LBNL). The ATLAS group at LBNL works on a broad range of physics topics from measurements to the Standard Model to searches for new physics. The group also plays important roles in the operation of the ATLAS pixel detectors, design and construction of upgraded silicon detectors, software development for improved detector performance, event generation, simulation, and computing.

Heather attended the University of Cape Town in South Africa from 1999-2005 where she obtained a BSc, BSc(Hons) and then a MSc in Physics. She then attended the California Institute of Technology and obtained her PhD in Physics in 2011. She then worked at CERN as a Research Fellow and Research Staff Scientist from 2012-2017 before moving to LBNL as a Divisional Fellow in 2017. Heather joined the UC Berkeley faculty in 2019. She received the IUPAP C11 Young Scientist Prize in 2018, a Sloan Fellowship in 2020 and a DOE Early Career Award in 2020. She is a member of the IRIS-HEP executive board, leads the Innovative Algorithms group and serves on the LBNC. 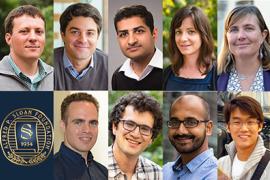 Nine young faculty members at UC Berkeley have been awarded a Sloan Research Fellowship, an honor given yearly to the brightest up-and-coming scientists in the United States and Canada. 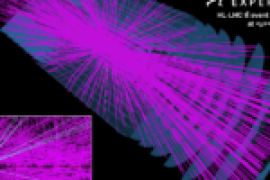 Giant-scale physics experiments are increasingly reliant on big data and complex algorithms fed into powerful computers, and managing this multiplying mass of data presents its own unique challenges.

Nine young faculty members at UC Berkeley have been awarded a Sloan Research Fellowship, an honor given yearly to the brightest up-and-coming scientists in the United States and Canada.