2006 Nobel Prize winner-Experimental Astrophysicist George Smoot is an active researcher in observational astrophysics and cosmology. Smoot’s group at Lawrence Berkeley National Laboratory and the University of California at Berkeley is observing our galaxy and the cosmic background radiation that is a remnant from the fiery beginning of our Universe. Projects include ground-based radio-telescope observations, balloon-borne instrumentation, and satellite experiments. The most famous of these is COBE (the NASA Cosmic Background Explorer satellite), which has shown that the cosmic background radiation intensity has a wavelength dependence precisely that of a perfectly absorbing body, indicating that it is the relic radiation from the Big Bang origin of the Universe.

Using NASA’s COBE DMR, Smoot and his colleagues made a map of the early Universe discovering the seeds of present day galaxies and clusters of galaxies. These seeds show up as variations at one part in 100,000 level in density from place to place. They also reveal information on the Big Bang and the origin of the Universe. In addition to continuing work on the four years of COBE data and on-going balloon experiments, Dr. Smoot has joined with colleagues in Europe to propose a new European Space Agency satellite to extend and improve these measurements. That satellite is now known as the Planck Satellite and is currently mapping the sky.  Dr. Smoot has also published a popular book on cosmology: Wrinkles in Time.

CMB data analysis: A major effort is data processing and analysis and the development of new techniques and algorithms. This included the analysis and extension of the extensive data set obtained by the COBE satellite during its four-year mission, analysis of balloon-borne instruments’ (MAXIMA/Boomerang) data, and analysis of the second-generation CMB anisotropy mission WMAP (Wilkinson Microwave Anisotropy Probe -launched June 2000). This has recently moved to analysis of the observations from the Max Planck Surveyor is the (launched May 2009) third-generation CMB anisotropy satellite. Post doctoral fellows associated with this effort are analyzing observations from the South Pole Telescope (SPT) and the Atacama Cosmology Telescope (ACT) (see Berkeley Center for Cosmological Physics.

Gravitational Wave Binary Black Hole Mass Re-Interpretation: The discovery of merging stellar mass blackholes binary systems was a great step forward. However, from the beginning he has been concerned about the origin of the heavier (>20 M_Sun) events. Working with Tom Broadhurst and Jose Maria Diego they have published three papers reinterpreting these apparently more massive events as more standard 8 -10 M_Sun masses of the more locally observed blackhole population as highly magnified by gravitational lenses and thus at greater distances and their actual masses lowered by a factor of 1+z one plus the redshift. They are currently working on a fourth paper and eagerly awaiting the release of LIGO/Virgo run 3 data.

Dark Energy and Dark Matter Probes: They have a significant effort in (weak) gravitational lensing and galaxy cluster correlation functions. These are focused on a project to improve and tighten the observation of the sum of the neutrino masses to well within the discrimination between normal and inverted hierarchy. This is aimed over the next short years as the Euclid satellite and CMB S4 should also be able to make these observations. They are also using strong gravitational lensing observations to provide information on the nature of dark matter and to discriminate between things like WIMPs and Wave (or Fuzzy) Dark matter. 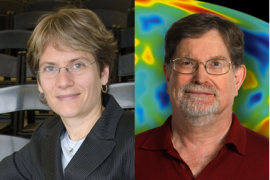 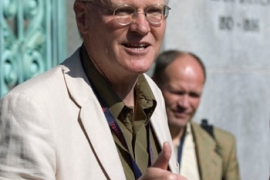 With several of its namesake’s descendants on hand for the occasion, UC Berkeley’s Peder Sather Center for Advanced Study is celebrating its launch today (Thursday) with a two-day campus conference.

With several of its namesake’s descendants on hand for the occasion, UC Berkeley’s Peder Sather Center for Advanced Study is celebrating its launch today (Thursday) with a two-day campus conference.