Amanda L. Tyler is the Shannon Cecil Turner Professor of Law at the University of California, Berkeley School of Law. Professor Tyler’s research and teaching interests include the Supreme Court, federal courts, constitutional law, legal history, civil procedure, and statutory interpretation. She is the co-author, with the Honorable Ruth Bader Ginsburg, of Justice, Justice Thou Shalt Pursue: A Life’s Work Fighting for a More Perfect Union, published by the University of California Press in 2021. The book is an outgrowth of Justice Ginsburg’s 2019 visit to Berkeley Law when she and Tyler sat down for a conversation about Justice Ginsburg’s life. Tyler is also the author of Habeas Corpus in Wartime: From the Tower of London to Guantanamo Bay, published in 2017 by Oxford University Press and released in paperback in 2019, as well as Habeas Corpus: A Very Short Introduction, published in 2021 by Oxford University Press.  Tyler has contributed to many books and published with the Atlantic, the Lawfare Blog, other media outlets, and numerous law journals.  Recent articles include Courts and the Executive in Wartime: A Comparative Study of the American and British Approaches to the Internment of Citizens During World War II and Their Lessons for Today, 107 California Law Review 789 (2019); Habeas Corpus in Wartime and Larger Lessons for Constitutional Law, Harvard Law Review Online (April 2019); and A “Second Magna Carta”: The English Habeas Corpus Act and the Statutory Origins of the Habeas Privilege, 91 Notre Dame Law Review 1946 (2016). Since 2016, Professor Tyler also has served as a co-editor of Hart and Wechsler’s The Federal Courts and the Federal System (Foundation Press) (with Richard H. Fallon, Jr., Jack L. Goldsmith, John F. Manning, and David L. Shapiro).

Prior to joining the Berkeley Law faculty in 2012, Professor Tyler served on the faculty of the George Washington University Law School and was a visiting professor at Harvard Law School, New York University School of Law, and the University of Virginia School of Law. In 2017, she was a Visiting Senior Fellow in the Law Department of the London School of Economics and the Order of the Coif Distinguished Visitor. Tyler is a past Chair of the Federal Courts Section of the American Association of Law Schools and is an elected member of the American Law Institute. In 2020, Professor Tyler received the law school’s Rutter Award for Teaching Distinction.

Professor Tyler holds a degree in Public Policy, with honors and distinction, from Stanford University, and a J.D., magna cum laude, from Harvard Law School. At Stanford, she played on the Division I Women’s Soccer Team. At Harvard, she served as Treasurer of the Harvard Law Review and won the George Leisure Award for Best Oralist in the James Barr Ames Moot Court Finals. Prior to entering academia, Professor Tyler served as a law clerk to the Honorable Guido Calabresi at the United States Court of Appeals for the Second Circuit and the Honorable Ruth Bader Ginsburg at the Supreme Court of the United States. She also practiced as an associate with the law firm of Sidley & Austin in Washington, D.C. Professor Tyler has run 18 marathons, including 11 Boston Marathons. 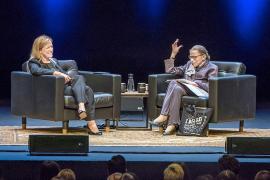