My field of observational cosmology is really exciting right now. New data are coming in at a rapid pace, answering some questions and raising yet more. Currently, the cosmic microwave background (CMB) is the primary focus of my research. We can now make accurate maps of the small temperature fluctuations in the CMB, which allows us to test cosmological models, such as inflation, and estimate values for cosmological parameters, such as the total energy density Ωtot and the baryon density Ωb.

In the future, measurements of polarization anisotropy in the CMB will improve cosmological models and allow us to probe the inflationary era directly. A component of the predicted polarization signal results from gravity waves produced during the inflationary epoch 10-38 seconds after the Big Bang. If we can detect this component, we will open a window on Grand Unified Theory (GUT) energy scales.

I am also interested in investigations of galaxy clusters via the Sunyaev-Zel'dovich effect (the scattering of CMB photons by the hot intracluster gas of a cluster). We can learn a great deal about cosmology with the Sunyaev-Zel'dovich effect by measuring the spatial distribution of clusters in the universe, as well as the distribution of gas in the clusters.

All of these science goals will require a new level of instrumental sensitivity. To this end, I am involved in the development of bolometric detector arrays. Current instruments are using arrays of 10 to 100 bolometric pixels, but telescopes can accommodate arrays of 1,000 to 10,000 pixels. We are developing bolometer arrays using a combination of superconducting sensors and Superconducting QUantum Interference Device (SQUID) readout.

MAXIMA is a balloon-borne CMB anisotropy experiment. The balloon flies at an altitude of 125,000 feet to reduce the effect of the atmospheric fluctuations. MAXIMA has recently published an accurate fluctuation power spectrum that covers a factor of twenty range in angular scales. These measurements (along with the BOOMERanG balloon-borne measurements) represent a major advance over previous experiments. Website: http://cfpa.berkeley.edu/group/cmb

MAXIPOL is a CMB polarization experiment using the MAXIMA instrument. It should have sufficient sensitivity to detect the very small polarization signal by integrating deeply on a small patch of sky. We plan to fly the instrument roughly once a year. Website: http://www.physics.umn.edu/cosmology/maxipol

Bolometer Array development: We are developing bolometer arrays of 1000 or more elements. The bolometer arrays are built with photolithographic techniques and use a superconducting metal biased in mid-transition as the temperature sensor. The detectors are operated at sub-Kelvin temperatures for high sensitivity. We are developing new techniques for coupling the bolometers to the telescope, for example, with planar antennas. Finally, we are developing methods for reading out many bolometers with a single SQUID. Such multiplexing of readouts is an important step for implementing large arrays. Website: http://bolo.berkeley.edu

Future experiments: We are in the design stage for new experiments that will use the superconducting bolometer arrays. A highly sensitive CMB polarization experiment and a Sunyaev-Zel'dovich galaxy cluster survey instrument are being planned. 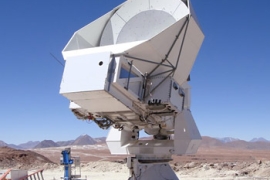 The POLARBEAR experiment, directed by UC Berkeley physicist Adrian Lee, is studying the B-mode polarization of the cosmic microwave background radiation. He hopes to determine the structure of matter in the universe, the masses of neutrinos and the nature of dark matter and dark energy.

The POLARBEAR experiment, directed by UC Berkeley physicist Adrian Lee, is studying the B-mode polarization of the cosmic microwave background radiation. He hopes to determine the structure of matter in the universe, the masses of neutrinos and the nature of dark matter and dark energy.