Phoebe A. Hearst Museum of Anthropology

Phoebe A. Hearst had a passion for travel and discovery. Founded in 1901, the museum that bears her name--the Phoebe A. Hearst Museum of Anthropology--is dedicated to the study of cultures from yesterday and today, both near and far. The Hearst Museum contains an estimated 3.8 million objects from California and around the world, as well as extensive documents, photographs and film recordings. The Hearst continues a legacy of enrichment and education, functioning as a vital resource for the University of California, Berkeley by supporting scholarly discovery, undergraduate experiences, and community-based research.

In 1931, the Museum moved from San Francisco to the UC Berkeley campus, but it was not until 1959 that the necessary space was constructed to realize Phoebe Hearst’s vision of building an anthropology museum in the East Bay. Located in the heart of the Berkeley campus at Kroeber Hall--with a second collections facility in nearby Richmond--the Museum’s mission is to steward a vast collection of objects spanning the infinite breadth of human cultures to advance knowledge and understanding.

With such richly-documented collections, we endeavor year-round to tell the stories of the makers and users of those objects through exhibits, programs, events, and digitally. We believe it is these very stories--with their shared commonalities and unique differences--that demonstrate our common humanity and the myriad connections that bring communities from around the world closer together.

In line with Phoebe Hearst’s original vision, the Museum continues to serve "as a great educator" dedicated to "the dissemination of knowledge among the many" and to "giving the people of California every educational advantage." Inspired by our founding patron, we promote the tools of humanists and social scientists, encouraging people to reflect on alternative perspectives, connect with others, and take action for positive change. 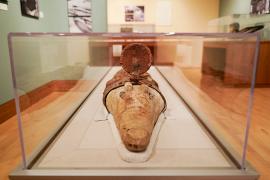 More than 100 years after their discovery, 19 mummified crocodiles are part of the Egyptian collection at the Phoebe A. Hearst Museum of Anthropology at UC Berkeley. These mummies, along with a collection of papyri held by the Center for the Tebtunis Papyri at the Bancroft Library, give us clues about how everyday ancient Egyptians lived and how far they went to appease crocodiles, hoping their devotion would win them some good will toward humankind.