Field Station for the Study of Behavior, Ecology and Reproduction

The Field Station for the Study of Behavior, Ecology and Reproduction (FSSBER) occupies 29 acres in the hills above the Berkeley Campus.

It was established by faculty from Anthropology, Psychology, Zoology and the College of Natural Resources in the early 1960s to promote the investigation of animal behavior in more natural settings than those provided by traditional laboratory environments. This type of study has become particularly rare in recent years, given the shift towards using transgenic lab animals for research. While important, lab studies do not necessarily inform us as to how animals interact with the real world – a highly pressing issue in these days of global climate change (see Lab and field experiments: are they the same animal? for more information).

During FSSBER's first decades, studies of bird-song dialects were carried out by Prof. Peter Marler and his students (Zoology). Prof. William Lidicker (Zoology) explored the nature of population cycles in local California voles. Prof. Starker Leopold of the College of Natural Resources investigated the social behavior of California quail. Anthropologists, led by Professors Sherwood Washburn and Phyllis Dolhinow, prepared for field studies with various primates in Africa and Asia by first observing the social behavior of macaques, baboons and langurs maintained in semi-natural groups at the FSSBER. In addition, numerous dissertations within the Department of Anthropology were based on observations of captive primates maintained at the Station. Social behavior, and particularly the hormonal basis of reproductive behavior in dogs, was the focus of a long-running program of research supervised by Dr. Frank Beach (Psychology).

The unusual facilities provided at the FSSBER have permitted studies of mate choice in cichlid fish, disease vectors in woodrats and pigs, breeding and behavioral observation of endangered /threatened species of native California kangaroo rats and woodrats, and predatory / maternal behavior of rattlesnakes. 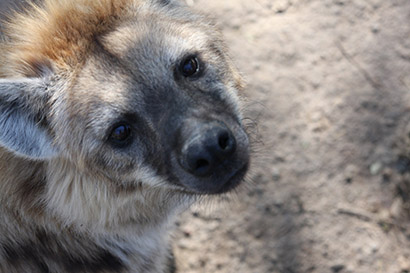 The FSSBER is perhaps best-known for its research program involving spotted hyenas that began in 1985. This comprehensive study of the development of morphology and behavior in spotted hyenas has drawn the attention of faculty and graduate students from the Departments of Psychology and Integrative Biology on the Berkeley Campus. The existence of a large colony of these fascinating carnivores has resulted in collaborative research with faculty and students from other UC Campuses (UC Davis, UC Santa Barbara, UCLA and UCSF), as well as with biomedical researchers at the University of Massachusetts, the University of Texas Southwest Medical Center in Dallas, NYU Medical School, Georgia State University and Michigan State University.. Archeologists from New York, Texas and France have also observed the details of bone-consumption by our hyenas, in an attempt to distinguish between assemblages deposited eons ago by hyenas, or by our tool-using ancestors.

Currently, Professor Frederic Theunissen and his lab members (Psychology; http://theunissen.berkeley.edu/ ) are using the FSSBER for two projects in animal communication.  The first project involved recording for the first time a complete vocal repertoire of the zebra finch in multiple identified individuals.  The second project is on going and involves running conditioning experiments in the spotted hyena to assess their ability to recognize individuals from their vocalizations.

The complete vocal repertoire of the zebra finch (Theunissen Lab) 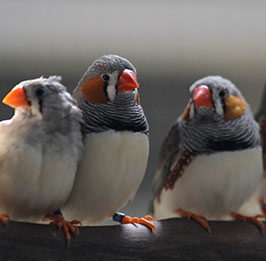 In the last year, we have built a unique database of zebra finch vocalizations that is composed of multiple exemplars of all the vocalization types that are found in this species’ vocal repertoire.

To create the zebra finch vocalization database, Post-Doctoral Fellow Julie Elie systematically recorded a complete vocal repertoire of 13 adult male, 13 adult female, 10 fledging male and 10 fledging female zebra finches from the breeding colony of the Theunissen or Bentley Labs housed at Field Station for Behavioral Research. By performing these sounds recordings in a controlled environment, Dr. Elie was able to obtain clear recordings of complete repertoires from the same individuals. Moreover, both the behavioral context and actions of callers and receivers during each call production was carefully monitored. We could therefore classify calls between 9 categories, not only based on their acoustical property but also on their behavioral function. The database contains at least 10 exemplars of each call type for each subject. This is truly a unique database of communication sounds that is enabling us to perform a series of research projects.  First, we are currently studying how “semantic” information is represented in the avian auditory system or more specifically the neural computations that allows sounds to be classified into behaviorally relevant classes.  Second, we are also examining the neural basis of voice recognition:  how is the identity of the caller extracted from any call that he or she can produce.  Finally, these neurophysiological studies are combined with behavioral studies on semantic categorization and voice recognition.  Dr. Elie is presenting the results of the semantic neurophysiological study at the Annual Meeting of the Society for Neuroscience in Fall 13 and was invited to give a talk at the bi-annual meeting of the Acoustical Society of America in Dec 2013.

Acoustical Discrimination of Identity in the Spotted Hyena (Theunissen Lab)

The spotted hyena has one of the largest vocal repertoires found in terrestrial mammals.  In past work, others and we have shown that two of the loud calls produced by the hyena (the whoop and the giggle) contain information about the identity of the caller.   We are currently running a conditioning experiment to test whether the spotted hyena is able to use this information and whether voice recognition is easier for certain call types over others.  In these experiments, individual hyenas trigger sound presentation trial and get rewarded (by an automatic feeder) if they respond to some sounds and not others.  We believe that this is the first time that hyenas have been trained in a conditioning experiment.

This experiment will give us unique insights on the scope of the information that is present in the hyena’s vocal calls and complement the natural observations of hyena vocal behaviors performed in Africa.

Our work on the vocalizations of the spotted hyena has been featured on NPR, the Discovery Channel, Wag-TV (Google: Theunissen Hyena).  Our paper on the potential meaning of the hyena giggle sound was published in BMC Ecology (Mathevon et al. 2010). 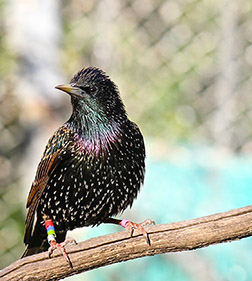 The Bentley Lab ( http://ib.berkeley.edu/labs/bentley/Welcome.html ) has several ongoing studies that can only be performed in the unique setting of the FSSBER. Broadly, the Bentley Lab studies how birds integrate environmental and social cues into hormonal signals that culminate in reproduction. For instance we do not understand why female birds of wild species usually do not produce eggs in captivity. The facilities at the FSSBER have allowed us to establish a breeding population of European starlings that is housed in a semi-natural environment. Typically, this species will not breed in captivity, but our colony is one of perhaps 2 captive colonies in the world in which starlings breed reliably. Thus, it provides us with a unique opportunity to study “normal” reproduction is a controlled setting so as to determine which environmental, social, and physiological factors inhibit reproduction in other captive environments. This knowledge is critical if we are to identify physiological targets for manipulation in captive breeding programs for endangered species.

Additionally, we are studying how sickness behavior (the behavioral response to being ill – for example, think about how your behavior changes when you get a cold) is altered by social environment. We have found that whether or not a male zebra finch has access to a potential mate determines his behavioral response to a perceived illness. If a mate is present, he “hides” his sickness in order to gain a potential mating opportunity.

Our work has been published in many journals (see http://ib.berkeley.edu/labs/bentley/Publications.html) and has been featured in the news: http://abclocal.go.com/kgo/story?section=news/health&id=7293847

Thus, there is a wide variety of research opportunities that are only made possible by the unique facilities at the FSSBER. We welcome Professor Michael Nachman who has recently moved to Berkeley from Arizona to become Director of the Museum of Vertebrate Zoology. Professor Nachman is already planning some long-terms studies at the FSSBER.

The facilities of the FSSBER are available for research by students and faculty of the University of California.