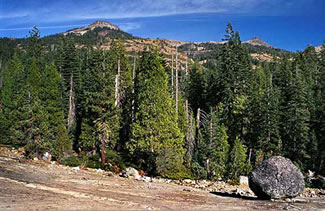 Located in the headwaters basin of the North Fork of the American River, the Chickering American River Reserve is the only NRS site set on the windward western slopes of the Sierra Nevada. This rugged site has thin soils and a variety of mountain habitats, including black oak woodlands, montane and subalpine coniferous forests, aspen groves, willow thickets, mixed riparian woodland, wet and dry subalpine meadows, montane chaparral, alpine lake margins, and fell fields. The basin also has scattered soda water springs, which contain a variety of minerals, primarily calcium bicarbonate.

Rich in flora and fauna, the site harbors one thousand plant species. It also lies within the habitat ranges of a variety of mammals, including pika, yellow-bellied marmot, marten, fisher, mule deer, black bear, and mountain lion. One hundred bird species, including northern goshawks and California spotted owls, are among the other inhabitants, along with more than fifteen reptile and amphibian species, including the yellow-legged frog, a declining species. Significant petroglyphic sites thought to be of the people of the Martis complex may date back 3,000 years or more.

Since 1975, when the Chickering family granted this land in a long-term conservation easement to the UC NRS, UC work on site has included a botanical checklist, pollination ecology studies, and wolverine surveys. Wasp-mite symbiosis has recently been studied. A broad plant survey was conducted over several decades by landowner Sherman Chickering, along with an investigation of multiple phenotypes in the lily Fritillaria atropurpurea. A plant list synthesized from the works of Chickering and others is available.