The mission of the Archaeological Research Facility (ARF) is to encourage and carry out archaeological field and laboratory research conducted by U.C. Berkeley archaeologists and related specialists. As a field of research, archaeology is inherently interdisciplinary and collaborative; not only are there intimate research collaborations among natural scientists, social scientists and/or humanities scholars, but archaeology is practiced by scholars who expectedly hold faculty and/or research positions in a variety of departments, ranging from Classics to the Lawrence Berkeley Laboratory.

Currently, 36 U.C. Berkeley faculty members from 10 departments and Organized Research Units are active participants in the Facility that is located in the 2251 College Building on the U.C. Berkeley campus. Thus, as an Organized Research Unit, the Archaeological Research Facility (ARF) has as its mission to make efficient use of resources, including laboratory facilities, to practitioners across campus; to develop resources and programs that benefit numerous scholars and their students, and thus to minimize duplication while being able to expand the requisite support - laboratory, equipment, funding - for an active, international field discipline such as archaeology.

The Archaeological Research Facility has experienced growth and increasing health, particularly over the past 8 years. A newsletter has been developed; the mailing list is well over 1000; guidelines and committees to oversee the administration of over $1,000,000.00 in endowments have been established; the publications income has been doubling, external grant totals have continued to increase and graduate student research can now be facilitated and supported through extramural grants and endowments; an educational outreach program has been initiated; new collaborative teaching and research relationships have been established among Berkeley and wider University of California archaeologists and researchers; and scholars of international repute, drawing crowds of over 400, have been among the sponsored lectures. We are particularly pleased that we have been able to develop such an expanded repertoire of scholarship and research, given what is without question a "bare bones" budget.

The Director of the Archeological Research Facility is Anthropology Professor Christine Hastorf. The Facility is supported by Nico Tripcevich (Laboratory Manager) and Sarah Kansa (Program Associate).

The Facility is governed by an Advisory Committee, appointed annually by the Vice Chancellor for Research's office upon the recommendation of the Director which consists of at least 5 members, to be drawn from a variety of departments or units on campus. There is a 3-person Publications Committee, to work with the Editor and oversee publications decisions and plans; and a Stahl Endowment Review Committee. 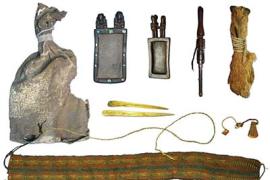 Today’s hipster creatives and entrepreneurs are hardly the first generation to partake of ayahuasca, according to archaeologists who have discovered traces of the powerfully hallucinogenic potion in a 1,000-year-old leather bundle buried in a cave in the Bolivian Andes.