Why megaprojects often have megapitfalls 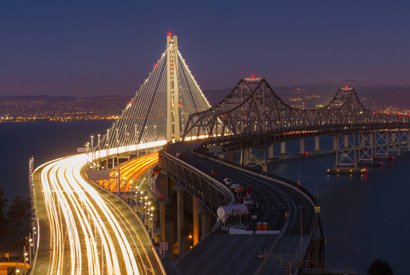 Everyone knows of a megaproject gone awry: the Bay Bridge or maybe Boston’s Big Dig. Many fear California’s high-speed rail project connecting the northern half of the state with the southern may become yet one more.

In its latest edition, California magazine turns to Karen Frick, an adjunct assistant professor of city and regional planning at UC Berkeley’s College of Environmental Design and co-director of the University of California Transportation Center, for insights into why so many huge public infrastructure projects come in way over budget and riddled with problems, disputes and controversies. Frick, a regional transportation planner before joining academia, is the author of Remaking the San Francisco-Oakland Bay Bridge: a Case of Shadowboxing with Nature.

Common problems plaguing megaprojects, says Frick, include an optimism bias, or simple overconfidence, and a desire for what is known as the “technological sublime.”

These massive projects are “built on the memory of a region, and in recognition of the other iconic projects of that region,” says Frick. “They are often associated with projects that are already built — like another transbay tube for BART. Infrastructure can take on a sublime aspect to politicians, to developers, to other people of influence. They want to be associated with that sublimity. But as we often see, efforts to achieve the sublime often become cautionary tales.”

Giant projects with their giant failures may be happening more now than in the past partly because there’s more regulation in contemporary planning and government, along with less bipartisan support, Frick theorizes.

She suggests that potential solutions may include honestly factoring in and acknowledging additional costs as projects proceed, “going small” instead of trying to impress with size, and by providing frameworks for meaningful and transparent public engagement.