Warming world may put most cities off-limits for summer Olympics

Health and safety of Olympians has been an ongoing story at Summer Olympic games. In 2008, air quality raised concerns in Beijing, while 2016 has been dogged with questions about polluted water and the Zika virus. Now, a new commentary co-written by UC Berkeley professor Kirk Smith says the future of the summer Olympics may be in jeopardy for another reason: rising heat and humidity due to climate change.

Among the findings, appearing in the The Lancet today: By 2085, only eight Northern Hemisphere cities outside of western Europe are likely to be cool enough to host the summer games. San Francisco would be one of just three North American cities that could serve as hosts.

The commentary, “The last Summer Olympics? Climate change, health and work outdoors,” is coauthored by UC Berkeley public health professor John Balmes, Alistair Woodward of the University of Auckland and Cindy Chang, the physician in charge of UC Berkeley’s athletic teams and the chief medical officer for Team USA at the 2012 London Olympics. 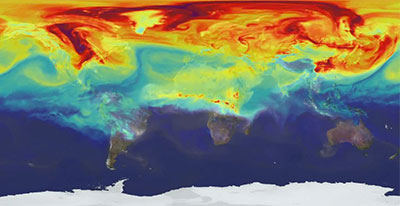 In the commentary, which comes from a larger study about climate change, the authors explain how their findings can be used to examine the viability of future Olympic sites based on a measurement that combines temperature, humidity, heat radiation, and wind — their wetbulb globe temperature (WBGT). Researchers used two climate models to project rising temperatures over the next century and applied those results to current safety procedures used in determining the viability of a host city.

The final study, which is still forthcoming and holds much broader implications than the future of outdoor Olympics, examines the relationship between health and productivity as the global climate continues to warm. The opening ceremonies of the 2016 games in Rio on Friday, however, did acknowledge climate change, and the impact that rising temperatures could have on the future of the games was not lost on Smith and his colleagues.

“Climate change could constrain the Olympics going forward,” said Smith, a professor of global environmental health in the School of Public Health. “And not just because of rising sea levels.”

The findings focused on the Northern Hemisphere, home to 90 percent of the world’s population. The authors considered only cities with at least 600,000 residents, the size considered necessary for hosting the games. Cities with elevations over a mile above sea level were omitted, as the most recent Olympic games hosted at such an altitude (Mexico City in 1968) faced challenges of their own.

The findings assumed that any venue with more than a 10 percent chance of having to cancel a marathon — one of the summer Olympics’ signature and exclusively outdoor events — on short notice would not be a viable host city.

“If you’re going to be spending billions of dollars to host an event, you’re going to want have a level of certainty that you’re not going to have to cancel it at the last minute,” Smith said.

The 10 percent criterion is currently used to evaluate potential sites of the winter games. If a potential host city is too unlikely to produce enough snow or cold enough temperatures, the chances of its bid winning decreases.

The findings indicate that by 2085, Istanbul, Madrid, Rome, Paris and Budapest – all cities that are or were in contention for either the 2020 or 2024 Summer Olympics – would be unfit to host the games. Tokyo, the city that has secured the 2020 summer Olympiad, would also be too hot to ensure athlete safety, should these projections come to pass.

According to the findings, eight out of 543 cities outside of western Europe would qualify as “low-risk” sites, including St. Petersburg, Russia; Riga, Latvia; Bishkek, Kyrgyzstan; and Ulaanbaatar, Mongolia.

In North America, Calgary and Vancouver would join San Francisco as the only three suitable sites. Both Canadian cities have hosted Olympics before — but the winter games, Calgary in 1988 and Vancouver in 2010. San Francisco explored the possibility of hosting this year’s summer games, but ultimately withdrew the bid in 2006.

Latin America and Africa combined would fail to provide a single viable city.

Western Europe is home to 25 cities that would be “low-risk” sites in 2085, according to the calculations.

But by the 22nd century, if their projections play out, the scientists concluded that only four Northern Hemisphere cities would be left on the list: Belfast and Dublin, Ireland; and Edinburgh and Glasgow in Scotland.

While these findings are concerned with the more distant future, being able to ensure athlete safety in the face of spiking temperatures is already an issue in outdoor summer competitions. In October 2007, the Chicago Marathon was canceled mid-race as hundreds of runners succumbed to the heat and sought medical attention. High temperatures also wreaked havoc this year during the U.S. Olympic Team trials marathon in Los Angeles, where 30 percent of the Olympic hopefuls failed to finish as the temperature on race day pushed 80 degrees Fahrenheit.

Should the findings reported in this commentary bear out, obvious work-arounds exist, such as running the Olympics indoors entirely or eliminating heat-sensitive endurance events like the marathon. Both solutions, however, would require a dramatic reimagining of how the modern Olympics are constructed.

“Climate change is going to force us to change our behavior from the way things have always been done,” said Smith. “This includes sending your kids outside to play soccer or going out for a jog. It is a substantially changing world. If the world’s most elite athletes need to be protected from climate change, what about the rest of us?”