Voters in U.S. presidential races make choices based on a candidate’s performance rather than on his or her policy positions – even when those stances run counter to the voters’ own, according to a new book by a University of California, Berkeley, political scientist. 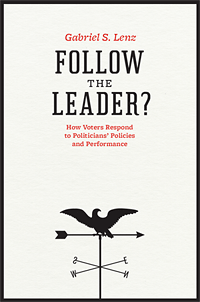 During campaigns, headline-grabbing public policy debates on Social Security, health care reform, defense and other issues rarely seem to matter to voters, according to assistant professor Gabriel Lenz, author of “Follow the Leader? How Voters Respond to Politicians’ Policies and Performance,” a book explaining his research findings about the way people vote. The book hit the shelves earlier this week.

“Unfortunately for democracy, the results are not reassuring,” Lenz writes.

He also looked at elections in Great Britain and the Netherlands, but especially salient to contemporary Americans as Election Day approaches is his analysis of voter attitudes in the U.S. presidential race between Ronald Reagan and President Jimmy Carter during an economic slump in 1980, Bill Clinton and George H. W. Bush during another recession in 1992, and Clinton versus Robert Dole during an economic boom in 1996.

“When people think a politician has performed well – perhaps by boosting economic growth or winning a war – they become or remain supportive …,” Lenz writes.  Perceived character traits relevant to performance, such as honesty or competence, he adds, also generate support or leanings toward support.

And while presidential campaigns have come to feature the question, “Are you better off than you were four years ago?” Lenz said in a recent interview how much better or worse off voters are six months before Election Day is a much better indicator of votes.  That is good news for President Obama, he said, because even if the economy was in the tank during his first years in office, it has shown recent signs of improvement.

But for voters to make policy a real priority in their election deliberations, he said, they would need to learn about the policy, develop their own opinion about it, and finally, learn a candidate’s stand on the topic before deciding if that stand warranted support or opposition.

Even when intensive campaign advertising or news coverage shines a spotlight on the policy position of a voter’s favorite candidate  and helps to educate a voter, Lenz said new awareness does not lead the voter to withdraw support or to switch to an opposing candidate. Instead, voters change their policy views, he said, and adopt the policy stance of their favorite candidate.

“For the issues I’m able to examine,” said Lenz, voters forgo policy positions and instead select candidates “for other reasons, such as performance advantages, party, or superficial traits such as appearance.” Lenz’s earlier research concluded that TV exposure can lead voters to choose the best-looking candidate.

He cautioned in “Follow the Leader” that if voters rarely vote on policy, politicians as a result may feel little constraint on the policies they pursue.

Lenz speculated that the average voter has little interest in becoming a policy wonk or activist, and that it isn’t uncommon for voters to support a candidate with whom they disagree on policy issues because they either aren’t aware of that disagreement or lack their own strong views on the issues. The percentage of voters surveyed who correctly identify political party policies across two interviews never breaks 50 percent, he said.

“It means that campaigns are not that likely to persuade people with policy appeals,” Lenz said. He observed that most presidential campaign ads may mention policy issues, but focus on character and job performance issues instead. The 2012 presidential campaign lacks a standout policy issue, he added, unlike the issue about investing Social Security funds in the Bush-Gore race in 2000.

“It’s not that voters are dumb or stupid,” he noted. “It’s just that they have better things to do with their lives.”

For those who see elections as votes on incumbent performance, Lenz said his findings may be reassuring.  But to those who see democracy as mainly about voters expressing policy preferences, his work probably will disappoint.

“Instead of politicians following voters on policy, voters appear to follow politicians,” he concludes in “Follow the Leader?”  “Moreover, they appear to do so blindly…” following their favorite candidates even when they are ignorant about those candidates’ general ideologies.

“Of course,” Lenz said, “some voters do care deeply about policy, but they appear to decide on their votes before campaigns.”