Unmasked: Many white women were Southern slave owners, too

In her new book, They Were Her Property: White Women as Slave Owners in the American South, Stephanie E. Jones-Rogers, UC Berkeley associate professor of history, expands our understanding of American slavery and the 19th century slave market with an investigation into the role of white women in the slave economy. She found they were active participants, profited from it and were as brutal as men in their management techniques.

On Monday, Oct. 28, a panel discussion of her book will be held from 4 to 5:30 p.m. at 820 Barrows Hall. Part of the Social Science Matrix “Authors Meet Critics” book series, Jones-Rogers will be joined by colleagues Bryan Wagner, associate professor in the Department of English, and Leslie Salzinger, associate professor in the Department of Gender and Women’s Studies.

(UPDATE 10/27/19 — Due to the power outage, the panel discussion has been canceled and will be rescheduled.)

The event takes place during the national observance of the 400th anniversary of the forced arrival in 1619 of enslaved Africans in the English colonies. Berkeley is participating with a year-long series of events that honor and celebrate the extraordinary intellectual, social and cultural contributions of African Americans, examine the long-lasting impacts of slavery and explore the roots and consequences to our society of continued discrimination, bias and inequality.

What led you to research white women slaveholders?

While in graduate school, I stumbled upon a rather notorious slave-owning woman from New Orleans, Marie LaLaurie. She was well-known because she became the subject of a scandal when local members of her community discovered she was torturing and had even murdered some of the slaves she owned. She was married and the mother of two daughters at the time of the discovery. What I found remarkable was not her violence, but what was clearly a deep economic investment in slavery and the extraordinary level of control she exercised over the enslaved people in her household. She was the only slave owner in the household and, as a consequence, she was the only person who exercised control over them. I wanted to know whether there were other women like her — that is, white married women who also held legal title to enslaved people and who exercised control over them. This led me on the research journey that led to my dissertation, which formed the basis for my book They Were Her Property: White Women as Slave Owners in the American South. 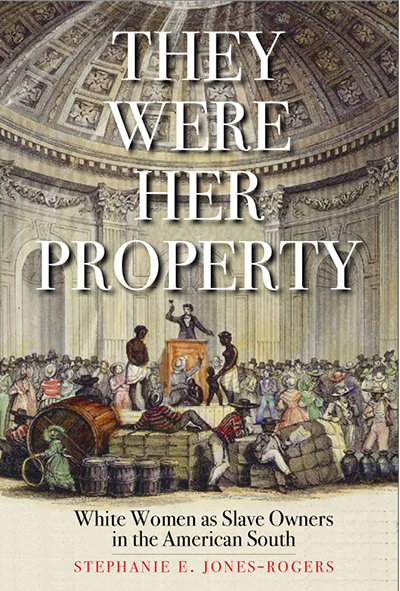 Initially, I sought out these women where other women’s historians had looked; their letters and diaries. But I found that they rarely discussed their economic investments in slavery. This compelled me to look elsewhere, and I examined the records which scholars of the African American experience look to when they study the lives of the enslaved — testimonies of enslaved and formerly enslaved people and a collection of interviews which the federal government conducted with formerly enslaved people in the 1930s and 1940s. I was astonished to discover just how frequently formerly enslaved people identified married slave-owning women who owned them or others and how they talked about the deep economic investments these white women had in the institution of slavery. Taking my cue from formerly enslaved people and using some of the details they provided in their interviews, I ventured into other archives — financial, legal, military records, newspapers, and letters and personal correspondence — to tell the story that unfolds in my book.

Who was the typical white woman slaveholder, and how did she come to acquire slaves?

Was this a common practice in the South?

It was quite common for girls and women to own enslaved people. The question of just how many women and girls owned enslaved people is a complicated one to answer for several reasons, but I am completing a quantitative project that I hope will bring us closer to an answer. Some of my preliminary data show that white women constituted approximately 40% of all the slave owners in my data sets. This is a figure that also holds in data collected by Catherine Hall at the University College London. She and a team of researchers created a database using British Parliamentary records related to abolition and slave owner compensation, and they also found that women constituted 40% of the slave owners who sought compensation after Britain abolished slavery in its colonies and territories.

What were the advantages, for women, of owning slaves?

In my book, I focus primarily on married slave-owning women, rather than single and widowed women (there are many studies that focus on them). Prevailing scholarship contended that married women rarely possessed control over property because of a legal doctrine called coverture. Under coverture, when any property-owning or wage-earning woman married, all of her property and wages immediately became her husband’s, and he could do whatever he wanted with them. Scholars have looked at this doctrine and, for the most part, argued that these women did not have economic investments in slavery because, by law, their slaves would become their husbands’ upon marriage. This was certainly true for some women, but not all of them. In the book, I show the ways that these married women circumvented the disabilities that came with marriage, particularly as those impairments pertained to property ownership. Slave-ownership allowed these women to exercise certain kinds of power in and over their lives, power and control that would not be available to them if they didn’t own enslaved people, and in this way, slavery was their freedom.

What did you learn about how these women treated their slaves?

The institution of slavery necessitated a culture of violence, and white women and girls were a part of this culture. In order to sustain the institution and to keep enslaved people in a state of near submission, violence and the threat of violence were vital. This culture of violence also created opportunities for some people to indulge their propensity toward sadism, and women were not immune to this. Women perpetrated acts of extreme violence against enslaved people for the same reasons that white men did.

One woman kept the enslaved people she owned in a state of near-starvation and would tempt a young enslaved girl who cleaned her bedroom by leaving a piece of candy on her dresser each day. One day, the enslaved girl yielded to temptation and ate the candy. When the slave-owning woman discovered the candy missing, she accused the young girl of stealing it and proceeded to punish her by placing her head on the floor underneath the curved portion of her rocking chair. This woman then summoned her young daughter to help her punish the enslaved girl. While she rocked back and forth on the young enslaved girl’s head, her daughter whipped her. When they finished punishing the enslaved girl, she was irreparably disfigured. She was never able to eat solid food again because her jaw would constantly slide to one side of her face. When she reached adulthood, her teeth never grew on that side, either. Each time she was in her mistress’s presence, her mistress was daily reminded of her cruelty, and it became so overwhelming that her mistress gave her to a relative, so she wouldn’t have to look at her anymore.

You also explored how slave-holding mothers raised their daughters from a young age to manage slaves. Tell us about this.

Children learned vicariously by watching their parents and other white adults in their communities interact with enslaved people, and some parents even allowed young white girls to manage and discipline enslaved people themselves. Because slavery necessitated a culture of violence, and it required constant reinforcement, white girls were constantly immersed in this culture. Even more than this, they played critical roles in it, too. They learned about the power and authority as white people, and they also came to understand their roles in sustaining the institution of slavery. Ultimately, they came to learn that, while they might endure oppression because of their gender, they possessed extraordinary power as white people, and they embraced this power.

How did your research findings impact you emotionally?

As a descendant of enslaved people, this was a hard book to write. I’ve lived with this project for 10 years, and that has been 10 years of pain intermingled with pride. I’ve dealt with the pain of telling this story by taking time away from the book, but I always returned to the work because I remembered that the enslaved people whose stories I tell in this book often braved dangerous and potentially fatal circumstances in order to have documented what had happened to them. When they gave these interviews, they lived in a nation plagued by racial violence, when African Americans were lynched for not using the right salutations when addressing a white person or moving out of the way when a white person approached them on the street. The interviewers were primarily white Southerners, and some of them were the descendants of slave owners. Formerly enslaved people knew this, and they knew the risks of telling these white interviewers about the most intimate dimensions of their lives, about the brutality they endured, and they told them anyway. In spite of the trauma, I owed it to them to persevere. And I ask those readers who find this book a “hard read” to remember this, to be brave and to reckon with the history that appears on the pages.

Why hasn’t the truth about slave-holding women been better known in history?

A few factors could be at play. The first studies focusing on women and slavery were written and published when women’s history emerged as a field of study, and the field was formed at the height of the women’s liberation movement. The story of white slave-owning women is a very ugly one, one that doesn’t align with a (primarily white) feminist narrative in which white women find common cause with women of color and forge alliances based on shared gender oppression. Additionally, many women’s historians studied women who left documents behind and thus focused on women who were literate and often elite, and by doing so, they offered studies of a very small subset of an already small group of women. The women in my book could be counted among the majority of slave-owning women, rather than the minority. Because many of these women were not literate or elite, historians often miss them. But using the interviews conducted with the formerly enslaved people they once owned, I was able to tell their story. And lastly, I think we hold out hope that women represent the better half of humanity; we hope that women will save us. This book dashes those hopes.

How does your work add to the mission of this 400th anniversary year?

The 400th anniversary of the landing of African-descended people in what would become the United States allows us to center the story of slavery and the lives of African Americans in our national narrative. Rather than being tangential to our founding, the anniversary compels us to recognize African Americans as fundamental to our nation’s birth. The story of our founding and the story of American slavery are far too often masculine ones. My book disrupts these masculine narratives by showing the fundamental roles that white women played in the enslavement of African-descended people and in sustaining the institution of slavery until its end.