Unlocking the Key to Immunological Memory in Bacteria 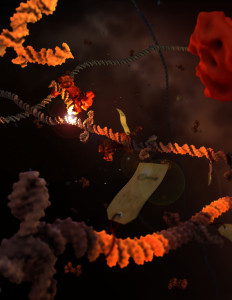 A powerful genome editing tool may soon become even more powerful. Researchers with the Lawrence Berkeley National Laboratory (Berkeley Lab) have unlocked the key to how bacteria are able to “steal” genetic information from viruses and other foreign invaders for use in their own immunological memory system.

“We’ve shown that bacteria need only two proteins to facilitate this process, Cas1 and Cas2,” says Jennifer Doudna, a biochemist with Berkeley Lab’s Physical Biosciences Division. “Our findings could provide an alternative way of introducing needed genetic information into a human cell or correcting a problem in an existing genome.”

Doudna, who also holds appointments with the University of California (UC) Berkeley’s Department of Molecular and Cell Biology and Department of Chemistry, and is also an investigator with the Howard Hughes Medical Institute (HHMI), is the corresponding author of a paper in Nature that describes the research. The paper is titled “Integrase-mediated spacer acquisition during CRISPR–Cas adaptive immunity.” The lead author is James Nuñez, a member of Doudna’s UC Berkeley research group. Other authors are Amy Lee and Alan Engelman.

Bacteria face a never-ending onslaught from viruses and invading strands of nucleic acid known as plasmids. To survive this onslaught, bacteria and archaea deploy a variety of defense mechanisms, including an adaptive-type immune system that revolves around a unit of DNA known as CRISPR, which stands for Clustered Regularly Interspaced Short Palindromic Repeats. A CRISPR unit of DNA is made up of “repeat” elements, base-pair sequences ranging from 30 to 60 nucleotides in length, separated by “spacer” elements, variable sequences that are also from 30 to 60 nucleotides in length.

Through the combination of CRISPR and squads of CRISPR-associated – “Cas” – proteins, bacteria are able to utilize small customized RNA molecules to silence critical portions of a foreign invader’s genetic message and acquire immunity from similar invasions in the future by “remembering” prior infections. Doudna and her research group have been pioneers in unraveling the mysteries behind the CRISPR-based immunological memory of bacteria.

“We’ve learned that bacteria can acquire critical pieces of genetic information from foreign invaders and insert this information into the CRISPR loci within their own genome as new spacers,” Nuñez says. “These foreign-derived spacers basically function as a memory bank.”

Until now, however, it was not known howspacers are stolen from the foreign invader’s genome and transferred into the CRISPR loci of the host. Working with the bacteria E. coli and using high-through­put sequencing of spacers inserted in vitro, Doudna, Nuñez and their colleagues found that the memorizing proteins – Cas1 and Cas2 – recognize repeating sequences in CRISPR loci and target these sites for the spacer insertion process.

“Repeat sequences in a host bacterium’s CRISPR locus form DNA cruciform (cross-shaped) structures that recruit Cas1 and Cas2 to the site for the insertion of spacer sequences,” Nuñez says. “The cruciform structures tell Cas1 and Cas2 precisely where to place the spacer sequences from a foreign invader, a virus or a plasmid. When the process is completed, the host bacterium is now immune to future infections from that same type of virus or plasmid.”

Doudna and her group believe that it may be possible in the future to program Cas1 and Cas2 proteins with a DNA sequence that carries desired information, i.e., codes for a specific protein, then insert this DNA into the appropriate site in the genome of a human cell using additional Cas1 and Cas2 proteins.

“It turns out that bacteria and archaea have been using Cas1 and Cas2 proteins in their immunization process for millions of years,” says Nuñez. “Our next task is to figure out the rules behind the process and how to apply them to human cells.”

This research was supported by grants from the National Science Foundation and the National Institutes of Health.

For more information about Jennifer Doudna and her research group go here.