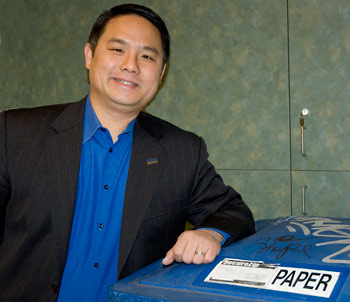 When you can’t find what you’re looking for, sometimes you need to create it yourself. Ask Lin Tien King.

It was the recycling-bin-that-wasn’t — the one he searched for high and low, soda can in hand — that set him on the path to become manager of Campus Recycling and Refuse Services at Berkeley.

That was back in 1993, while a graduate student in environmental policy and planning at Cal State University, Fullerton. After his frustrating quest for a recycling receptacle, King “asked a lot of questions” of CSUF administrators — who turned around and hired him to create the campus’s first comprehensive recycling program.

Soon the committed recycler was visiting all 20 CSU campuses for his thesis, “California State University Recycling Programs: Their Progress, Innovations and Barriers,” one of the first studies of its kind in California.

As someone who was introduced to recycling as an undergrad, King believes it pays to do his work at the college level.

“If we build this behavior in all our students,” he says, it’s apt to become a habit they take forward into the “real world,” whether they become a public-sector employee or a future Google CEO.

Born in Taiwan and raised in Walnut Creek from the age of 6, King calls himself “a product of the UC system,” referring to his undergrad days at UC Davis, where he combined environmental and business studies. In 1999, after earning his master’s degree and holding jobs with Orange County and the state, he returned to Davis to manage that campus’s recycling program.

In his 15 years in that role, King co-authored a 200-page how-to manual on college and university recycling and worked to eliminate waste at Aggie Stadium, by encouraging a recycling mentality in fans and partnering with concessionaires to switch to recyclable or compostable products. (Out with landfill-bound containers, straws and candy wrappers, in with compostable substitutes.)

The rest is (recent) history. In 2010, the Aggies were named diversion-rate champions in the Game Day Challenge, a national EPA competition to reduce trash output at college-football home games, and won that category again in 2011.

Here at Berkeley, King has set his sights on the recycling and waste-management goals established by the UC system — 75 percent diversion (to recycling or compost) by June 2012, “zero waste” by 2020.

While considerable progress has already been made, there’s still a way to go, he notes: In 2008-09, the central campus generated an estimated 10,500 tons of solid waste, not including hazardous materials — 6,800 tons of which went to landfill, the remainder to recycling and compost.

King spends much of his time these days meeting with units throughout campus on how to reduce, reuse and recycle, to quote a sustainability mantra. He’s now added composting to the discussion.

Educating the campus community is a critical piece of the equation, he says, citing “a misperception that custodians will sort materials into the right bins.” In fact, if a recycling bin becomes contaminated with non-recyclable materials, “our custodians have to throw it out as trash,” he says.

A point King likes to emphasize, besides the obvious environmental benefits of recycling, is that “trash costs the university money; recycling earns us money.” The campus currently pays $71.47 a ton to landfill the trash — while it earns, on average, $80 a ton for recycling paper, King notes. “The math is simple:  the campus saves almost $151.47 a ton when you recycle versus throwing it in the trash.”

Currently, the campus’s compostables are trucked by Recology, a local recycling service, to the Central Valley town of Grover, “to sell to the farmers who grow our food,” says King. “We are currently looking into more local options.”