On the Trail of Cellular Mysteries

By: Rachel Shafer, College of Engineering

Some engineers do their best work in the bold lines of steel structures, others in the precise instructions of Java, but the medium Mohammad Mofrad prefers is microscopic-that of human cells. 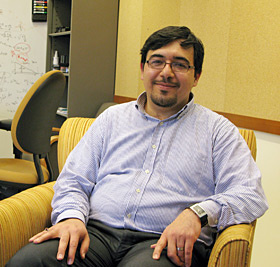 The UC Berkeley assistant professor of bioengineering has been busy uncovering the mysteries of how our cells behave when physical force is applied to them, working at the exact intersection of engineering and biology.

Mofrad and a handful of fellow researchers are in the vanguard of a subspecialty called cellular mechanobiology, or cellular biomechanics, where they're stirring up the entire field of biology by adding physics to the mix. The ramifications of their work may one day bring about better treatments for cancer and cardiovascular disease as well as HIV/AIDS and the common flu. Almost certainly these researchers will contribute to our fundamental understanding of how human bodies work.

"Cellular biomechanics is the foundation for many physiological functions, such as how we breathe and how we move," says fellow researcher Shu Chien, a professor of bioengineering at UC San Diego.

Earlier this year, Mofrad won a National Science Foundation CAREER award for his work on mechanotransduction, the mechanisms by which cells convert mechanical stimuli into biochemical activity. Since the 19th century, scientists have known that cells "feel" a physical force and react in important ways, such as initiating tissue repair. But exactly how is largely unknown. 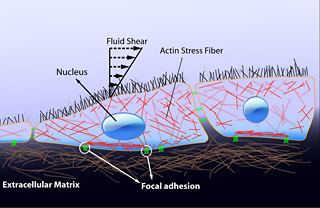 To better understand mechanotransduction, Mofrad studied endothelial cells, which make up the inner layer of a blood vessel. Among several important functions, these cells "sense" the shear stress of blood flow. As Mofrad and other researchers have discovered, the cells prefer a certain range and profile of stress. As mechanotransduction unfolds, an endothelial cell converts that "happy zone" of the blood's force, a mechanical signal, into a biochemical signal. The biochemical signal instructs the cell, ultimately via the nucleus, to express genes and synthesize proteins that produce normal cellular activity and maintain the healthiness of surrounding tissue.

But what if those circulatory forces spike outside the preferred range? Reacting to the abnormality, mechanotransduction is altered, which in turn disrupts the cells' ability to govern a healthy physiology; and this, the researchers believe, may eventually lead to diseases such as atherosclerosis, a build-up of fatty material clogging the arteries. (Atherosclerosis is a precursor to heart attacks, strokes, heart valve disorders and other diseases.) "Normal mechanotransduction is a good thing," Mofrad says. "But any abnormality that happens in a cell's microenvironment leads to an organ-to-molecule, feedback loop system, which leads to disease. That's about all we know."

So Mofrad's lab is working on two computer modeling projects to better understand exactly how mechanotransduction occurs at the molecular level, precisely how mechanical energy is converted to biochemical. One theory explores the role of focal adhesion, a molecular "glue" that involves protein complexes stretching from outside to inside the cell. Building on earlier studies, Mofrad's team developed a detailed model demonstrating that, when a cell experiences force, focal adhesion proteins such as talin and vinculin change molecular shape. By changing shape, they launch a cascade of events that carry the signal all the way to the nucleus, which ultimately directs the cell to respond. Sometimes that means a cell moves, and, in a diseased cell, focal adhesion mechanotransduction might explain how cancer spreads. 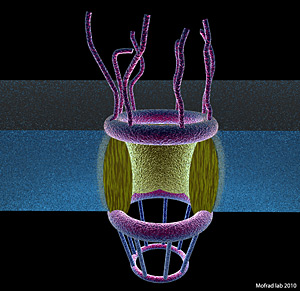 Mofrad's team is also investigating the nuclear pore complex (NPC), a basket-like group of proteins that control traffic in and out of the nucleus, governing the transport of everything from genetic building blocks and ribonucleic acids to proteins and signaling molecules carried from outside the cell. Researchers are trying to understand exactly how the NPC facilitates transport. Their findings may one day help stop viruses such as HIV and influenza from bringing their genetic material into the nucleus and spreading it to other cells.

To relate these two projects, Mofrad's lab has developed computer simulations of the cytoskeleton, an interconnected network of filaments that give shape and structure to the cell and effectively couple focal adhesions to the nucleus. He and his research team are also working with collaborators to validate their modeling projects via experimental studies.

"Of Mohammad's many contributions, his biggest has been helping the field understand these fundamentals," says Roger Kamm, a professor of mechanical and biological engineering at MIT who specializes in cellular and molecular mechanics.

That fundamental work is challenging the traditional boundaries of biology. "Biology and chemistry have gone hand in hand for a long time," Mofrad explains, "but in order to really understand the biology of cells, we also need to understand how mechanics and chemistry are interlinked in biology. So far, little attention has been paid to mechanics in this context." Moreover, a large number of biologists remain unconvinced that mechanics might play a foundational role in a cell's functionality. Mofrad wants to change that. His lab established an online database so researchers can easily access and contribute information on mechanotransduction.

The last person on earth to stir the proverbial pot, Mofrad is unfailingly polite and exceedingly modest. He's built a sterling academic career, including stints at MIT and Harvard Medical School, on the strength of his computations. For a long time, he eschewed biology because it was too qualitative. "I like subjects you can formulate in a mathematical way," he says. As biology shifted increasingly toward the quantitative over the last decade, Mofrad found a career match.

The allure was also personal. When Mofrad was a graduate student in mechanical engineering, his father died of heart valve complications, and Mofrad has been drawn to matters of the heart ever since. As a doctoral student and postdoc, he modeled blood flow in the coronary arteries and carotid bifurcations, but it was the heart valve that consumed Mofrad's early years as a faculty researcher. One of his biggest achievements has been to develop a computer model that aims to predict the onset of aortic valve calcification based on knowledge of how cells deform under abnormal mechanotransduction.

More than anything, Mofrad is a teacher. He's driven to explain, and when he can't explain, he's driven to understand so those mysteries can be shared. In five short years at Berkeley, he's co-edited three textbooks on topics related to computational biomechanics and cellular mechanics including Cellular Mechanotransduction, recently published by Cambridge University Press, and developed five new undergraduate and graduate courses in Berkeley's Department of Bioengineering.

Uncovering the mystery of mechanotransduction will take years, Mofrad knows, but he hopes one day the knowledge will improve human health. "If I can contribute to the understanding of cancer or heart disease, that would be very satisfying."

Reprinted with permission from Innovations, volume 4, issue 4, May 2010, College of Engineering.