Time is now for a new revolution in urban water systems

As California grapples with what state water officials have called a drought of “epic proportions,” UC Berkeley David Sedlak has been watching for signs that people are ready for a water revolution.

Could this drought, perhaps the worst in five centuries, provide the kick in the pants needed for a major shift in how we source and deliver water throughout the state?

Consider this. Even without the drought, Sedlak, deputy director of Re-inventing the Nation’s Urban Water Infrastructure (ReNUWIt), sees signs of stress in the state’s current water delivery and treatment system. Decaying infrastructure, ranging from aging treatment plants to levees that could fail in a major earthquake, must support an ever-growing population.

Instead of finding new ways to pipe in water from other areas, Sedlak projects significant growth in water recycling, rainwater harvesting and seawater desalination.

Recognition of the need for investment in such advances may be growing. During a recent visit to California’s parched farmlands, President Barack Obama proposed a $1 billion “climate resilience fund” that, if approved by Congress, could include support for “breakthrough technologies and resilient infrastructure” to cope with the impacts of climate change.

“Here in California, we’ve got a confluence of factors that could spark major advances in technologies that usher in the fourth generation of urban water,” said Sedlak, a professor of civil and environmental engineering.

In a conversation with UC Berkeley Media Relations, Sedlak – whose new book, “Water 4.0: The Past, Present and Future of the World’s Most Vital Resource,” was published in January by Yale University Press – described what this fourth generation might look like.

Let’s start off by explaining the title of the book. What does Water 4.0 mean?

The term Water 4.0 is a nod to the tech industry’s naming convention for signaling a major change in computer systems. In this book, each number is associated with a revolution in which people recognized that the system they have no longer meets their needs.

Water 1.0 applies to the first revolution, the aqueducts of the Roman Empire. Rome was the first city of over a million people, and water demand quickly exceeded the ability of the local water sources. The Romans built aqueducts that brought millions of gallons of water into the city every day. They then put their used water into canals, and eventually they covered the canals over, so they also gave us sewers. 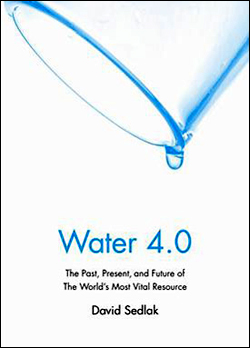 Water 2.0 involves treating drinking water, first by filtration and later with the addition of chlorine. This came around the turn of the 20th century, as cities became more crowded and people started getting sick from their water. When the flush toilet replaced the outhouse, it created a public health problem as wastes were discharged directly into the water supply of downstream communities.

Engineers, led by a team from MIT, developed filtration systems that were the basis for the first modern drinking water treatment plants. This revolution largely alleviated typhoid fever and cholera in the West.

So our drinking water was safe, but untreated sewage was still being discharged into the environment. Water 3.0 gave us sewage treatment plants. After the Second World War, people started noticing that the Great Lakes, coastlines and estuaries were dying because of water pollution.

By the early 1970s, people were fed up. The environmental movement took off and in 1972, we passed the Clean Water Act. By the end of the 1970s, most cities in the U.S. had well-functioning sewage-treatment plants.

So now we’re at a point where drought, an aging infrastructure and a host of other problems are leading us to examine the future sustainability of our water supply. Interim solutions, like water conservation and retrofits to treatment systems, can help, but eventually we’ll need a major upgrade.

How we deal with this will be Water 4.0, the next revolution in our water system.

What would this new revolution look like? Where do we need to go from here?

In California, I predict we’ll see major investments in local water supplies. These new water systems will feature lots of water recycling, the capture and use of rainwater that would otherwise become urban runoff that pollutes beaches, and seawater desalination.

The tough thing about upgrading water infrastructure is that it requires smart investments over a long period of time. We’re not talking about downloading software from the Internet. These are complex systems that are meant to last. Now is the time to start planning systems that will be built in the next decade.

We are already seeing examples of Water 4.0 all around the world. For example, due to concerns about security of its imported water supply, Singapore already uses a mixture of water recycling, desalination and stormwater capture to supplement their imported water.

Closer to home, parts of this new approach are being built in places like Orange County, where the Groundwater Replenishment System supplies about 60 million gallons per day of recycled water to a drinking-water aquifer. Using advances in treatment processes that include reverse osmosis and UV disinfection, the treatment plants injects highly treated sewage back into the drinking water aquifer. The local utility also diverts water from the Santa Ana River — a river that in the summer consists almost entirely of wastewater from upstream neighbors — into infiltration basins that percolate water into the aquifer. They’ve been doing this for over 35 years in Orange County, and it’s how they expect to support additional population growth and ride out droughts.

What do you see as the biggest barriers to moving forward on water-recycling projects? What will it take to overcome them?

For potable-water recycling, sometimes ridiculed as the “toilet-to-tap” approach, I would have said 10 years ago that public perception was the biggest impediment. But utilities are becoming more confident of their ability to gain public acceptance for this approach. In Big Springs, Texas, a potable-water recycling recently went online, and now about 10 million gallons a day of highly treated sewage is being piped into the drinking-water reservoir. It’s the first large direct potable- water reuse system in a developed country.

A water-reuse project in San Diego that died over 15 years ago came back to life a few years ago, well before the current drought. Experience has made us more comfortable with the idea of water recycling. The professional community sees it as less of a big deal. It seems like the public feels more comfortable when its professionals feel better.

Technologies are also developing that will someday allow us to recycle water within our homes. This approach will likely be even more readily accepted by the public because it ties into their enthusiasm for use of gray water, which includes the water from sinks and washing machines.

Systems exist now for efficiently reusing water at the household scale, but they are still quite expensive and probably 20 to 30 years away. But that’s exactly why we need research and development now.

And what are the prospects for desalinating our seawater?

For desalination in California, there are specific concerns about coastal development that have slowed construction. One of the largest seawater-desalination plants slated to be built in our state is being led by a private company. As a result, many people have been suspicious about the project’s financing and costs. But other projects are being led by public agencies. I see the current controversies as a temporary setback.

But seawater desalination is no longer restricted to rich Middle East countries. We see desalination becoming increasingly popular worldwide, with massive plants being built in Australia, Israel and Spain.

Seawater desalination is one of our more expensive options, but it is a mature and reliable technology. It is here to stay.

So, as we face a future of severe drought, how is Water 4.0 shaping up?

The revolution has begun, but we need public policies and investments, like those described by the president, to support its growth. I think it’s just a matter of time, especially in light of current predictions that suggest that this will not be our last severe drought.