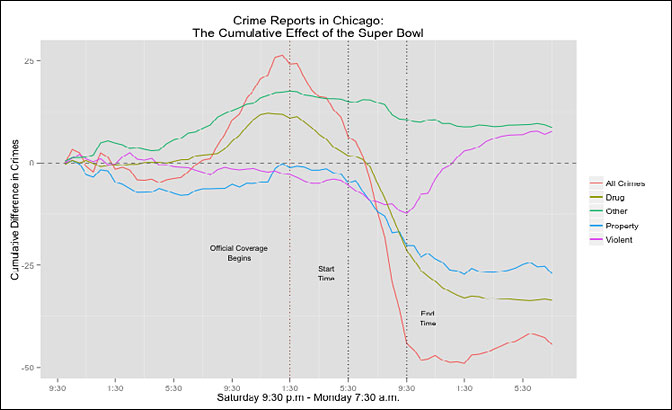 Televised sports can reduce crime. In brief, that’s the conclusion of two UC Berkeley law students, based on their research exploring the relationship between major sporting events on television in Chicago and crime rates there.

“In general, we find substantial declines during games across crime types — property, violent, drug, and other — with the largest reductions for drug crime,” write Hannah Laqueur and Ryan Copus in the research paper they posted recently on the Social Science Research Network.

“We believe fewer potential offenders on the streets largely explain the declines in crime,” conclude the pair, who are doctoral students in Berkeley Law’s Jurisprudence and Social Policy Program. Their paper adds to the small but growing body of work looking at the relationship between entertainment and crime.

Laqueur and Copus analyzed Chicago crime reports by the half hour during major televised sporting events. Charts showing their findings are posted above and below.

They found that the Super Bowl generates the most dramatic declines: total crime reports decreased by about 25 percent (roughly 60 fewer crimes). The decline was partially offset by an increase in crime before the game, especially in drug and prostitution reports, and an uptick in reports of violent crime immediately after the game.

During Chicago Bears’ Monday night football games, crime reports dropped roughly 15 percent (30 fewer crimes) than during the same time on non-game nights, they found. Their results showed similar but smaller effects for NBA (National Basketball Association) and MLB (Major League Baseball) games. Unlike for the Super Bowl, these events didn’t show increased crime before and after games, they wrote.

While firm conclusions about the reasons for the drop would need further research, Laqueur and Copus considered various possibilities before landing here: “The fact that we find significant reductions in crime during televised sports games implies some individuals trade off participating in criminal activity for watching sports. This lends support to theories of crime that suggest some share of criminal behavior is recreational and opportunistic.”

Their findings have practical implications for the debate over the effects of entertainment on crime. “The debate surrounding the effect of media on criminal behavior has been too
narrowly focused on the psychological link between violent entertainment and aggression,” they wrote. “Whatever short-term aggression-inducing effects movies, television, or video games have may be negligible in comparison to their diversionary power.” 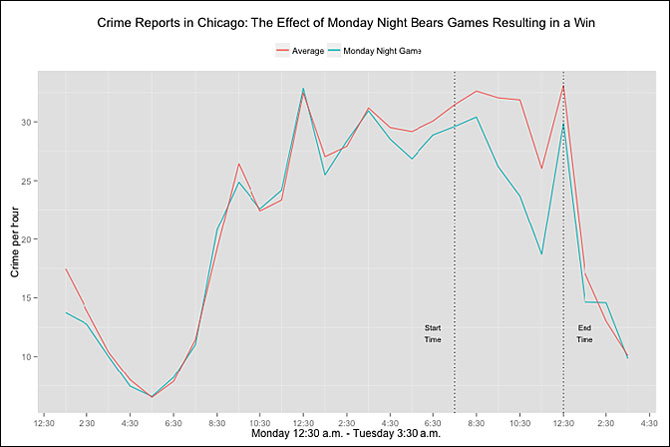