Despite their almost incomprehensibly small size – a diameter about one ten-thousandth the thickness of a human hair – single-walled carbon nanotubes come in a plethora of different “species,” each with its own structure and unique combination of electronic and optical properties. Characterizing the structure and properties of an individual carbon nanotube has involved a lot of guesswork – until now.

Researchers with the U.S. Department of Energy (DOE)’s Lawrence Berkeley National Laboratory (Berkeley Lab) and the University of California (UC) Berkeley have developed a technique that can be used to identify the structure of an individual carbon nanotube and characterize its electronic and optical properties in a functional device.

“Using a novel high-contrast polarization-based optical microscopy set-up, we’ve demonstrated video-rate imaging and in-situ spectroscopy of individual carbon nanotubes on various substrates and in functional devices,” says Feng Wang, a condensed matter physicist with Berkeley Lab’s Materials Sciences Division. “For the first time, we can take images and spectra of individual nanotubes in a general environment, including on substrates or in functional devices, which should be a great tool for advancing nanotube technology.” 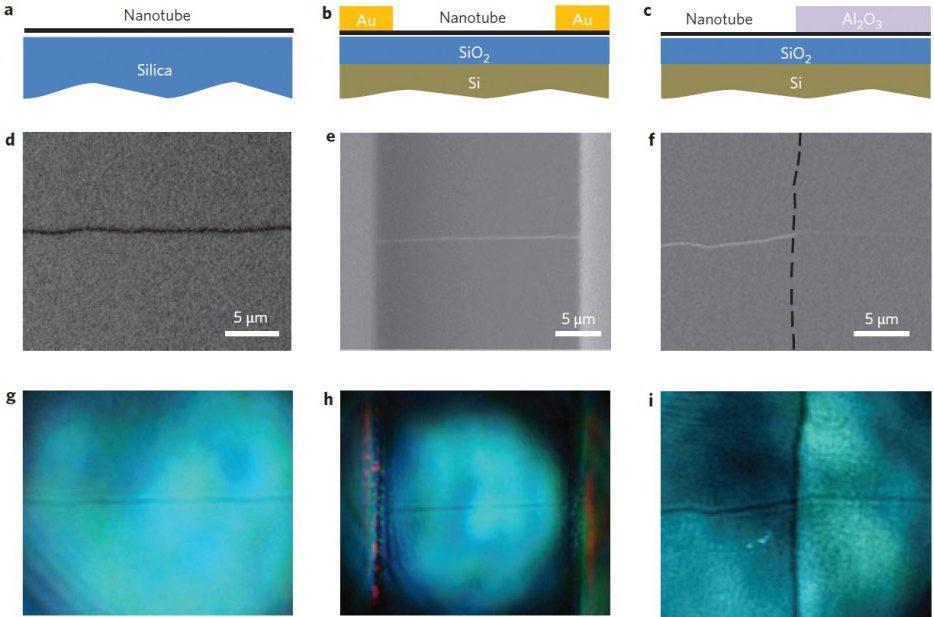 “To fully understand field-effect devices or optoelectronic devices made from single-walled carbon nanotubes, it is critical to know what species of carbon nanotube is in the device,” Wang says. “In the past, such information could not be obtained and researchers had to guess as to what was going on.”

The physical structure and electronic properties of each individual species of single-walled carbon nanotubes are governed by chirality, meaning their structure has a distinct left/right orientation or “handedness,” which cannot be superimposed on a mirror image. As a result, achieving chirality-controlled growth of carbon nanotubes and understanding the physics behind chirality-dependent devices are two of the biggest challenges in nanotube research.

“Polarization-based optical microscopy and spectroscopy techniques are well-suited for meeting these challenges, as polarized light is extremely sensitive to optical anisotropy in a system and has long been exploited to study chirality in molecules and crystals,” Wang says. “However, the small signal and unavoidable environment background has made it difficult to use polarized optical microscopy to study single carbon nanotubes.”

Difficulties arise from an apparent contradiction in polarization-based optical microscopy. For any optical microscope, a large numerical aperture (NA) objective is crucial for high-spatial resolution, but polarized light passing through a large NA objective becomes strongly depolarized. With their new technique, Wang and his colleagues were able to do what has not been done before and simultaneously achieve both high polarization and high spatial resolution.

In their set-up, Wang and his colleagues collected nanotube-scattered polarized light with a 0.8 NA objective but used a much more narrow incident beam to create illumination light from a supercontinuum laser with a much smaller NA. The result was polarization an order of magnitude higher than what has been achieved with conventional polarized microscopy and spatial resolution at the nanoscale. This enabled them to obtain complete chirality profiles of hundreds of as-grown carbon nanotubes, and to perform in-situ monitoring in active field-effect devices.

In addition to individual single-walled carbon nanotubes, Wang and his colleagues say their technique can also be used to greatly enhance the optical contrast of other anisotropic nano-sized materials that are “invisible” to conventional optical microscopes, including graphene nanoribbons, semiconductor nanowires and nanorods, and nanobiomaterials such as actin filaments.

This research was supported by grants from the National Science Foundation, the Center for Integrated Nanomechanical Systems, and by DOE’s Office of Science.