Not only has the average global temperature increased in the past 50 years, but the hottest day of the year has shifted nearly two days earlier, according to a new study by scientists from the University of California, Berkeley, and Harvard University. 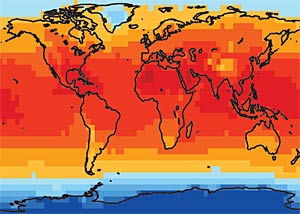 Just as human-generated greenhouse gases appear to the be the cause of global warming, human activity may also be the cause of the shift in the cycle of seasons, according to Alexander R. Stine, a graduate student in UC Berkeley's Department of Earth and Planetary Science and first author of the report.

"We see 100 years where there is a very natural pattern of variability, and then we see a large departure from that pattern at the same time as global mean temperatures start increasing, which makes us suspect that there's a human role here," he said.

Although the cause of this seasonal shift - which has occurred over land, but not the ocean - is unclear, the researchers say the shift appears to be related, in part, to a particular pattern of winds that also has been changing over the same time period. This pattern of atmospheric circulation, known as the Northern Annular Mode, is the most important wind pattern for controlling why one winter in the Northern Hemisphere is different from another. The researchers found that the mode also is important in controlling the arrival of the seasons each year.

Whatever the cause, Stine said, current Intergovernmental Panel on Climate Change (IPCC) models do not predict this phase shift in the annual temperature cycle.

Details are published in the Jan. 22 issue of the journal Nature.

Temperatures at any given time of the year can be very different on land than over the ocean, Stine said, and a change in the strength and direction of the winds can move a lot of heat from the ocean onto land, which may affect the timing of the seasons. However, this seems to be only a partial explanation, he said, because the relationship between this pattern of circulation and the shift in the timing of the seasons is not strong enough to explain the magnitude of the seasonal shift.

Stine noted that the study limited its focus to non-tropical regions because the seasons are more pronounced outside the tropics.

Stine, Peter Huybers, assistant professor of earth and planetary sciences at Harvard University, and Inez Fung, UC Berkeley professor of earth and planetary science and of environmental science, policy and management, and co-director of the Berkeley Institute of the Environment, based their study on a publicly available database of global surface temperature measurements over both land and ocean from 1850 to 2007 that was compiled by the University of East Anglia's Climate Research Unit in the United Kingdom. Using non-tropical data only, the team found that, while land temperatures in the 100-year period between 1850 and 1950 showed a simple pattern of variability, with the hottest day of the year in the Northern Hemisphere around July 21, temperatures in the period 1954-2007 peaked 1.7 days earlier.

Stine said that monthly temperatures follow a sinusoidal curve, rising to a peak in mid-summer, then dropping to a winter low, and finally rising again because of increased sunshine to another summer high. The temperature typically lags solar insolation by about 30 days over land and 60 days over the ocean, he said, because it takes less energy to heat the moisture in soil than to heat the ocean.

Biologists have noticed large changes in the arrival time of many signs of spring over the past 50 years. Buds have been seen opening earlier, birds migrating earlier, snow melting earlier and sea ice breaking up earlier. These changes have been explained by the fact that the Earth is warming, and thus the temperature in any given month has increased. In contrast, this new study finds that individual months have been warming at different rates than others, and that as a result, the peak summer temperature and lowest winter temperature both now come earlier in the calendar year.

"We're saying that, on top of the long term trend of warmer summer and winter highs, peak warming is coming earlier within the year," Fung said. "It's not just the onset of spring, but the peak."

The research team is now looking for other mechanisms to explain the observed shift in the timing of the seasons. These include a hypothesized drying of the global soils, which would cause the land surface to respond more quickly to the sun, and changes in the amount of solar energy absorbed by the atmosphere due to industrial pollution.

One surprising aspect of the researchers' findings is that the changes they discuss explain so much about the changes over the last 50 years in the month-to-month pattern of temperatures around the globe.

"Once we have accounted for the fact that the temperature averaged over any given year is increasing, we find that some months have been warming more than other months. We were surprised to find that over land, most of the difference in the warming of one month relative to another is simply the result of this shift in the timing of the seasons, and a decrease in the difference between summer and winter temperatures," said Stine.

The research was funded by the National Science Foundation.