An analysis of more than 70,000 galaxies by University of California, Berkeley, University of Zurich and Princeton University physicists demonstrates that the universe - at least up to a distance of 3.5 billion light years from Earth - plays by the rules set out 95 years ago by Albert Einstein in his General Theory of Relativity. 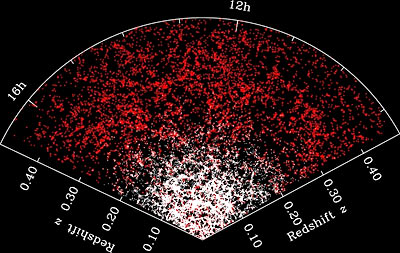 A partial map of the distribution of galaxies in the Sloan Digital Sky Survey, going
out to a distance of 7 billion light years. The amount of galaxy clustering that we
observe today is a signature of how gravity acted over cosmic time, and allows as to
test whether general relativity holds over these scales. (M. Blanton, Sloan Digital
Sky Survey)

By calculating the clustering of these galaxies, which stretch nearly one-third of the way to the edge of the universe, and analyzing their velocities and distortion from intervening material, the researchers have shown that Einstein's theory explains the nearby universe better than alternative theories of gravity.

One major implication of the new study is that the existence of dark matter is the most likely explanation for the observation that galaxies and galaxy clusters move as if under the influence of some unseen mass, in addition to the stars astronomers observe.

"The nice thing about going to the cosmological scale is that we can test any full, alternative theory of gravity, because it should predict the things we observe," said co-author Uros Seljak, a professor of physics and of astronomy at UC Berkeley and a faculty scientist at Lawrence Berkeley National Laboratory who is currently on leave at the Institute of Theoretical Physics at the University of Zurich. "Those alternative theories that do not require dark matter fail these tests."

In particular, the tensor-vector-scalar gravity (TeVeS) theory, which tweaks general relativity to avoid resorting to the existence of dark matter, fails the test.

The result conflicts with a report late last year that the very early universe, between 8 and 11 billion years ago, did deviate from the general relativistic description of gravity.

Seljak and his current and former students, including first authors Reinabelle Reyes, a Princeton University graduate student, and Rachel Mandelbaum, a recent Princeton Ph.D. recipient, report their findings in the March 11 issue of the journal Nature. The other co-authors are Tobias Baldauf, Lucas Lombriser and Robert E. Smith of the University of Zurich, and James E. Gunn, professor of physics at Princeton and father of the Sloan Digital Sky Survey.

Einstein's General Theory of Relativity holds that gravity warps space and time, which means that light bends as it passes near a massive object, such as the core of a galaxy. The theory has been validated numerous times on the scale of the solar system, but tests on a galactic or cosmic scale have been inconclusive.

"There are some crude and imprecise tests of general relativity at galaxy scales, but we don't have good predictions for those tests from competing theories," Seljak said. 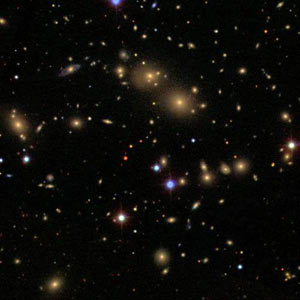 An image of a galaxy cluster in the Sloan Digital Sky Survey,
showing some of the 70,000 bright elliptical galaxies that were
analyzed to test general relativity on cosmic scales. (Sloan
Digital Sky Survey)

Such tests have become important in recent decades because the idea that some unseen mass permeates the universe disturbs some theorists and has spurred them to tweak general relativity to get rid of dark matter. TeVeS, for example, says that acceleration caused by the gravitational force from a body depends not only on the mass of that body, but also on the value of the acceleration caused by gravity.

The discovery of dark energy, an enigmatic force that is causing the expansion of the universe to accelerate, has led to other theories, such as one dubbed f(R), to explain the expansion without resorting to dark energy.

Tests to distinguish between competing theories are not easy, Seljak said. A theoretical cosmologist, he noted that cosmological experiments, such as detections of the cosmic microwave background, typically involve measurements of fluctuations in space, while gravity theories predict relationships between density and velocity, or between density and gravitational potential.

"The problem is that the size of the fluctuation, by itself, is not telling us anything about underlying cosmological theories. It is essentially a nuisance we would like to get rid of," Seljak said. "The novelty of this technique is that it looks at a particular combination of observations that does not depend on the magnitude of the fluctuations. The quantity is a smoking gun for deviations from general relativity."

Three years ago, a team of astrophysicists led by Pengjie Zhang of Shanghai Observatory suggested using a quantity dubbed EG to test cosmological models. EG reflects the amount of clustering in observed galaxies and the amount of distortion of galaxies caused by light bending as it passes through intervening matter, a process known as weak lensing. Weak lensing can make a round galaxy look elliptical, for example.

Using data on more than 70,000 bright, and therefore distant, red galaxies from the Sloan Digital Sky Survey, Seljak and his colleagues calculated EG and compared it to the predictions of TeVeS, f(R) and the cold dark matter model of general relativity enhanced with a cosmological constant to account for dark energy.

The predictions of TeVeS were outside the observational error limits, while general relativity fit nicely within the experimental error. The EG predicted by f(R) was somewhat lower than that observed, but within the margin of error.

In an effort to reduce the error and thus test theories that obviate dark energy, Seljak hopes to expand his analysis to perhaps a million galaxies when SDSS-III's Baryon Oscillation Spectroscopic Survey (BOSS), led by a team at LBNL and UC Berkeley, is completed in about five years. To reduce the error even further, by perhaps as much as a factor of 10, requires an even more ambitious survey called BigBOSS, which has been proposed by physicists at LBNL and UC Berkeley, among other places.

Seljak noted that these tests do not tell astronomers the actual identity of dark matter or dark energy. That can only be determined by other types of observations, such as direct detection experiments.