Study shows wingspan has a correlation to athletic prowess in the NBA, MMA

For decades, boxing coaches and analysts have concerned themselves with “the tale of the tape,” using a competitor’s measurements — height, weight and reach — to determine their advantage in an upcoming bout. Now, new research out of UC Berkeley suggests that the relative length of an athlete’s arms to their height might be even more important than previously believed.

The study was published Friday, July 13 in the Journal of Anthropology of Sport and Physical Education, shows that body proportions, specifically the ratio of arm length to height, are significantly associated with elite athlete success in the NBA and mixed martial arts (MMA).

Reach, or the length of a fighter’s arm, has always been data of some importance among the fighting community because of the tactical advantage it lends. The term “wingspan” is now en vogue among NBA teams and scouts when considering prospects ahead of the NBA draft.

Led by Dr. Tesla Monson, a Berkeley postdoctoral researcher now at the University of Zurich, researchers looked at arm span and height in more than 10,000 individuals, including roughly 3,000 basketball players, 1,300 MMA fighters and 6,000 U.S. Army recruits. The study shows advantages of a wide wingspan relative to the height of athletes. 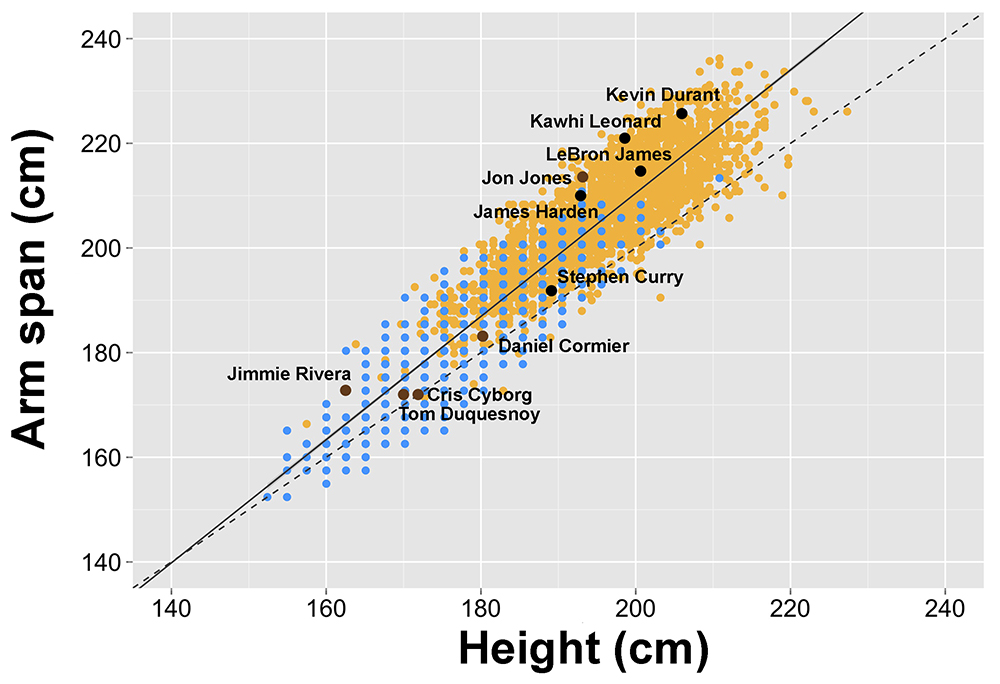 “This work is important,” says Monson, “because it is one of the first studies to look at body proportions in really tall individuals and use statistics within a scientific framework to investigate biological factors that contribute to elite athletic success in professional sports.”

By studying body proportions in the context of biology and anthropology, scientists were able to show that some of the most elite athletes — including the NBA’s LeBron James and Kevin Durant, and the UFC’s two-time champion Jon Jones — have relative arm spans that are significantly above average while still falling within the expected ranges for normal human variation.

But not all elite athletes have arm spans that are above average. Data shows that two-time NBA MVP Stephen Curry has a relative arm span that is below average for athletes, as does current UFC Women’s Featherweight Champion Cris Cyborg.

Read the complete study on the Journal of Anthropology of Sport and Physical Education website.