UC Berkeley scientists have identified a key culprit responsible for the fluid loss and resulting shock that are the hallmark of severe — and potentially fatal — dengue virus infections.

A team of researchers led by molecular virologist Eva Harris, a UC Berkeley professor in the Division of Infectious Diseases and Vaccinology, presented new evidence that a guilty party is a protein secreted by cells infected with the mosquito-borne dengue virus. Called nonstructural protein 1 (NS1), it is the only one of the 10 viral proteins secreted by infected cells to circulate freely in the bloodstream.

In experiments conducted on human lung endothelial cells and in mice, the researchers showed that NS1 caused permeability of the endothelium, which lines the walls of blood and lymph vessels. They found that the protein itself, separate from the dengue virus, can cause blood vessels to leak fluid.

Remarkably, the researchers also found that blocking this protein in mice protected them from the lethal effects of dengue virus infection, an important finding given that an effective vaccine against dengue has remained elusive, partly because there are four serotypes of the virus that cause disease.

“This is a missing piece in the puzzle of the pathogenesis of dengue,” said Harris, senior author of the study published Wednesday, Sept. 9, in the journal Science Translational Medicine. “The role of NS1 itself had been overlooked in severe forms of dengue disease, but we now know that it is an important player. Our findings show that NS1 could be a prime target for drugs, and that it should be considered in vaccine development.”

No vaccine, no treatment

Every year, about 390 million people are infected with dengue virus, which is primarily spread by Aedes mosquitoes, with tropical climates hit hardest. Because there is no treatment or vaccine for dengue, the main method of controlling the disease has focused on reducing mosquito breeding sites and supportive care, such as fluid replacement, for patients with severe dengue.

About one in four people infected go on to develop symptoms ranging from fever and headaches to severe muscle and joint pain, earning dengue the nickname “breakbone fever.” Most worrisome are the cases that develop into dengue hemorrhagic fever and dengue shock syndrome caused by the loss of fluids from blood vessels. According to estimates from the World Health Organization, roughly a half-million cases of dengue hemorrhagic fever and dengue shock syndrome occur annually, killing 22,000 people. 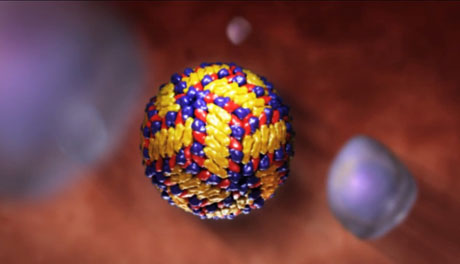 “What is agonizing is that you don’t know from the outset of an infection who will die,” said Harris. “Once the fluid loss begins, it can become fatal in just one to two days.”

The people at greatest risk for dengue shock are those who have had a prior infection. An initial infection with one of the four serotypes of dengue virus can impart long-term immunity for that specific virus type, but only temporary immunity against the rest. Once the short-term immunity to the other three serotypes wears off, the survivor is at greater risk for more severe disease from a subsequent infection.

New target for drugs and vaccines

The dominant hypothesis to explain this has been that the antibodies from the first infection react with the new serotype in a way that worsens the damage. In this antibody-dependent enhancement, the antibodies inadvertently increase the virus’s ability to infect immune cells, leading to more serious symptoms.

“The interaction with the antibodies might be happening, but it never fully explained all cases of dengue hemorrhagic fever,” said study lead author P. Robert Beatty, an assistant research scientist at UC Berkeley’s School of Public Health. “The toxicity of NS1 makes more sense than just having an over-reactive immune response. NS1 is a more direct pathway toward disease. It is a trigger that causes vessels to become permeable to fluid, causing the vessels to leak plasma.”

NS1 is produced by all serotypes of dengue virus. The researchers homed in on this viral protein after they noticed that the pathogenic effects of dengue virus infection were blocked in mice that had generated antibodies to NS1.

The team found that mice injected with NS1 alone, without the virus present, developed symptoms of dengue disease that included a cascade of inflammatory cytokines, vascular leakage and fluid loss. If the researchers added a sublethal dose of dengue virus type 2, the resulting infection was fatal.

On the other hand, immunization of mice with recombinant NS1 from each of the four serotypes protected mice against vascular leak and the lethal effects of dengue virus type 2.

“What’s exciting to me is that if we can make antibodies against this toxin and include them in a vaccine, we could potentially prevent a dengue infection from progressing to the more severe symptoms,” said Beatty. “The findings open up new intervention strategies where few now exist.”

The National Institute of Allergy and Infectious Diseases helped support this work.