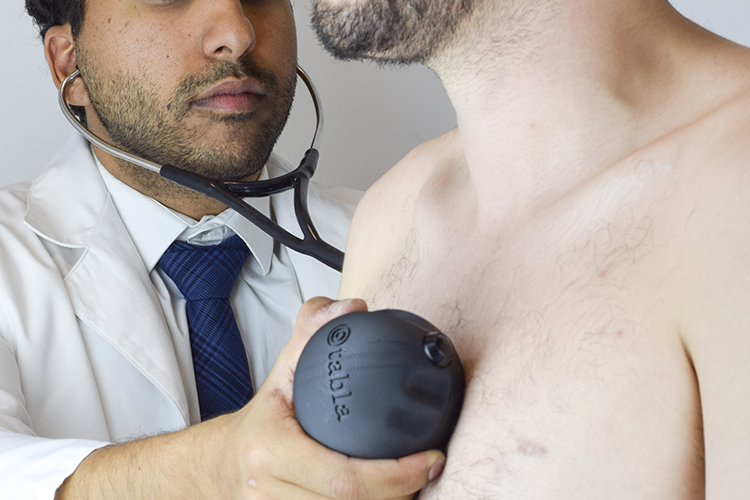 A student-designed medical device to diagnose pneumonia has been named the winner of the student category of Fast Company‘s 2017 Innovation by Design Awards. The device, called Tabla, was created by Adam Rao, a medical student at UCSF and a student in the UC Berkeley/UCSF joint Ph.D. program in bioengineering, and Chen Bao and Jorge Ruiz, both 2017 Berkeley graduates in mechanical engineering. The Fast Company awards honor the best design ideas across 14 fields, with winners selected from 2,500 entries.

Tabla is a low-cost medical device that uses sound waves to diagnose pneumonia. Tabla was designed to provide a cheaper and more accessible alternative to chest X-rays for diagnosing pneumonia. The device quantifies and charts changes in sound during percussive physical examinations, in which a physician taps the sternum and back and assesses the resulting sounds.

Tabla was a classroom project created during the Interactive Device Design course, taught by Bjoern Hartmann, faculty director of Berkeley’s Jacobs Institute for Design Innovation, and mechanical engineering professor Paul Wright. The project was further developed as part of, and was the biggest winner in, the 2017 Big Ideas at Berkeley competition.

Read more on the Jacobs Institute for Design Innovation website