Stereotypes measurably influence how we treat each other 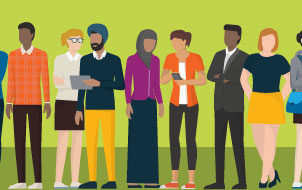 Our race, ethnicity, nationality, gender, socio-economic class and physical appearance can determine whether or not we get a break in life. But how big a role do social stereotypes really play when it comes to landing a job, loan, university spot or other opportunity?

UC Berkeley neuroscientist Ming Hsu and fellow researchers have built a computational model that can predict the degree to which we discriminate against one another based on our stereotypes of groups according to their perceived warmth and competence.

For example, in one experiment known as the “dictator game,” study participants allotted more of their money to a player characterized as Irish, whom they viewed as warm, than to an English player, whom they viewed as more competent but less warm. This bias resulted in measurable benefits for members of the group perceived as warmer.

“We found that people don’t just see certain groups as warmer or nicer, but if you’re warmer by X unit, you get Y dollars more,” said Hsu, an associate professor in the Haas School of Business.

The findings, published this week in the Proceedings of the National Academy of Sciences journal, have implications for the job and housing markets, university admissions, philanthropy, lending practices and more. Overall, they make a direct connection between widely held stereotypes and deeply entrenched societal inequities.