Snails travel far and wide, spreading disease along the way

Parasite-carrying snails can travel long distances, spreading a deadly disease along the way, according to new research led by UC Berkeley. The study is the first to find genetic evidence for long-distance movements — as far as 30 miles—among snails that pose an important public health threat.

Where and how snails move is of concern in many developing countries because freshwater snails transmit schistosomiasis, a parasitic disease that affects more than 240 million people worldwide. Each snail can contaminate the water that people work, swim or wash in with many parasites, so movement of just one snail to a new area could introduce the disease in a previously healthy population. The study found that the way humans manage the land and waterways that snails traverse could be enabling their spread.

“We don’t think of snails as particularly mobile, but the genetic evidence we found — that snails can traverse substantial distances — is a reminder of just how difficult it is to contain and control infectious diseases carried by animals and insects,” said Justin Remais, an associate professor of environmental health sciences at UC Berkeley, who led the study.

The study was published Dec. 15 in the journal PLoS Neglected Tropical Diseases. 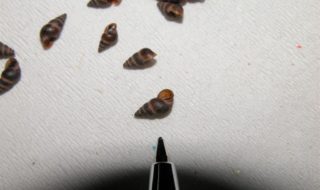 Understanding how disease-carrying snails move is critical for designing ways to limit their spread, particularly in China, where an uptick in schistosomiasis infections has been observed following years of work to control the spread of the disease.

“We can deploy the most effective control efforts and make major progress reducing transmission, but much of our work can be undone if hosts or vectors reintroduce pathogens into areas where we’ve previously achieved control,” Remais said.

For the study, the research team traveled to villages in Sichuan Province, China, and collected and analyzed the genetic makeup of hundreds of snails that carry parasites. The scientists collected snails from their natural habitat along waterways that crisscross rice and other agricultural fields. They then analyzed the genetic material from these snails in labs at the China Centers for Disease Control and Prevention and at Justus Liebig University in Giessen, Germany.

The snails’ genetic information suggested nearly one-quarter of the snails in the study had migrated from another location, some as far away as 27 miles (44 kilometers).

The evidence for long-distance movement by snails suggests that they travel both under their own power and with a significant helping hand, namely by rafting on vegetation in water, being transported in agricultural products and getting carried by birds or other animals, according to the researchers.

The study also found that human modifications to the landscape may determine where snails move. Movement was most likely to occur across land that had been developed for agriculture, and areas with expansive irrigation networks were most likely to receive and retain migrating snails.

“Changes to our environment can facilitate or limit the spread of vectors and hosts, and so we need research that helps us fully understand the consequences of human activities for the spread of the diseases they carry,” Remais said.

The study will allow scientists to devise targeted surveillance and preventative measures to detect the establishment (or re-establishment) of snail populations with the goal of reducing their numbers.