Smelling your food makes you fat 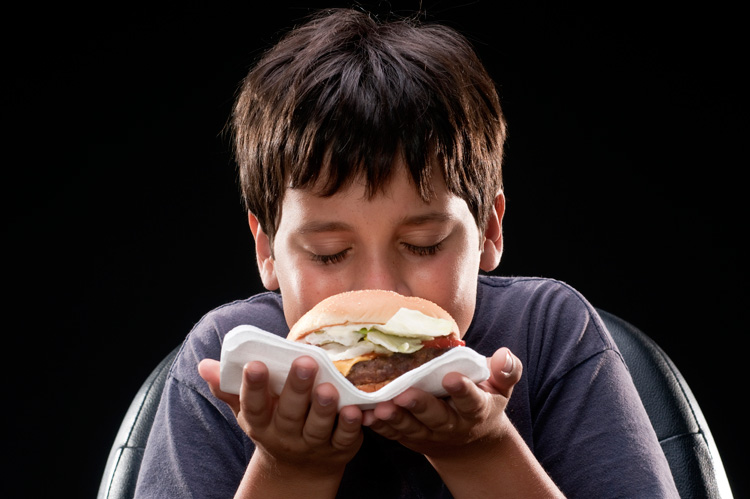 Our sense of smell is key to the enjoyment of food, so it may be no surprise that in experiments at the University of California, Berkeley, obese mice who lost their sense of smell also lost weight.

What’s weird, however, is that these slimmed-down but smell-deficient mice ate the same amount of fatty food as mice that retained their sense of smell and ballooned to twice their normal weight.

In addition, mice with a boosted sense of smell – super-smellers – got even fatter on a high-fat diet than did mice with normal smell.

The findings suggest that the odor of what we eat may play an important role in how the body deals with calories. If you can’t smell your food, you may burn it rather than store it.

These results point to a key connection between the olfactory or smell system and regions of the brain that regulate metabolism, in particular the hypothalamus, though the neural circuits are still unknown.

“This paper is one of the first studies that really shows if we manipulate olfactory inputs we can actually alter how the brain perceives energy balance, and how the brain regulates energy balance,” said Céline Riera, a former UC Berkeley postdoctoral fellow now at Cedars-Sinai Medical Center in Los Angeles.

Humans who lose their sense of smell because of age, injury or diseases such as Parkinson’s often become anorexic, but the cause has been unclear because loss of pleasure in eating also leads to depression, which itself can cause loss of appetite.

The new study, published this week in the journal Cell Metabolism, implies that the loss of smell itself plays a role, and suggests possible interventions for those who have lost their smell as well as those having trouble losing weight.

“Sensory systems play a role in metabolism. Weight gain isn’t purely a measure of the calories taken in; it’s also related to how those calories are perceived,” said senior author Andrew Dillin, the Thomas and Stacey Siebel Distinguished Chair in Stem Cell Research, professor of molecular and cell biology and Howard Hughes Medical Institute Investigator. “If we can validate this in humans, perhaps we can actually make a drug that doesn’t interfere with smell but still blocks that metabolic circuitry. That would be amazing.”

Riera noted that mice as well as humans are more sensitive to smells when they are hungry than after they’ve eaten, so perhaps the lack of smell tricks the body into thinking it has already eaten. While searching for food, the body stores calories in case it’s unsuccessful. Once food is secured, the body feels free to burn it.

The researchers used gene therapy to destroy olfactory neurons in the noses of adult mice but spare stem cells, so that the animals lost their sense of smell only temporarily – for about three weeks – before the olfactory neurons regrew.

The smell-deficient mice rapidly burned calories by up-regulating their sympathetic nervous system, which is known to increase fat burning. The mice turned their beige fat cells – the subcutaneous fat storage cells that accumulate around our thighs and midriffs – into brown fat cells, which burn fatty acids to produce heat. Some turned almost all of their beige fat into brown fat, becoming lean, mean burning machines.

In these mice, white fat cells – the storage cells that cluster around our internal organs and are associated with poor health outcomes – also shrank in size.

The obese mice, which had also developed glucose intolerance – a condition that leads to diabetes – not only lost weight on a high-fat diet, but regained normal glucose tolerance.

On the negative side, the loss of smell was accompanied by a large increase in levels of the hormone noradrenaline, which is a stress response tied to the sympathetic nervous system. In humans, such a sustained rise in this hormone could lead to a heart attack.

Though it would be a drastic step to eliminate smell in humans wanting to lose weight, Dillin noted, it might be a viable alternative for the morbidly obese contemplating stomach stapling or bariatric surgery, even with the increased noradrenaline.

“For that small group of people, you could wipe out their smell for maybe six months and then let the olfactory neurons grow back, after they’ve got their metabolic program rewired,” Dillin said.

Dillin and Riera developed two different techniques to temporarily block the sense of smell in adult mice. In one, they genetically engineered mice to express a diphtheria receptor in their olfactory neurons, which reach from the nose’s odor receptors to the olfactory center in the brain. When diphtheria toxin was sprayed into their nose, the neurons died, rendering the mice smell-deficient until the stem cells regenerated them.

Separately, they also engineered a benign virus to carry the receptor into olfactory cells only via inhalation. Diphtheria toxin again knocked out their sense of smell for about three weeks.

In both cases, the smell-deficient mice ate as much of the high-fat food as did the mice that could still smell. But while the smell-deficient mice gained at most 10 percent more weight, going from 25-30 grams to 33 grams, the normal mice gained about 100 percent of their normal weight, ballooning up to 60 grams. For the former, insulin sensitivity and response to glucose – both of which are disrupted in metabolic disorders like obesity – remained normal.

Mice that were already obese lost weight after their smell was knocked out, slimming down to the size of normal mice while still eating a high-fat diet. These mice lost only fat weight, with no effect on muscle, organ or bone mass.

The UC Berkeley researchers then teamed up with colleagues in Germany who have a strain of mice that are supersmellers, with more acute olfactory nerves, and discovered that they gained more weight on a standard diet than did normal mice.

“People with eating disorders sometimes have a hard time controlling how much food they are eating and they have a lot of cravings,” Riera said. “We think olfactory neurons are very important for controlling pleasure of food and if we have a way to modulate this pathway, we might be able to block cravings in these people and help them with managing their food intake.”

The work was supported by the Howard Hughes Medical Institute, the Glenn Center for Research on Aging and the American Diabetes Association.