Scrutinizing Space Storms for a Calmer Life on Earth

When winter storms blast in from the Pacific, or hurricanes lash the Southeast, it can seem as if we’re at the mercy of punishing, unpredictable forces. But all is relatively calm here compared to the violent, seemingly random turbulence a hundred miles above the earth, in the upper reaches of the atmosphere, known as the ionosphere.

In this region, on the edge of space, between 50 and 350 miles above the earth, the sun’s energy strips air molecules of their electrons, creating vast streams of charged particles, or ions, that can roil the upper atmosphere with immense chaotic storms. The bursts of charged particles, called plasma, interferes with satellite communications. It can disrupt aircraft operations as well as a car’s GPS down here on terra firma.

Until the last ten years, scientists believed that the fierce space storms were driven entirely by the sun’s energy, but satellite-borne studies have begun to show that the relatively mild storms we experience on earth actually affect ionospheric turbulence as well.

Storms in our lower atmosphere can drive immense
atmospheric waves upwards, and these in turn propel charged particles across the earth’s magnetic fields. Temperature variation in the waves can lead to fluctuations of nearly 200 degrees Fahrenheit in space.

Thomas Immel, a senior fellow at Berkeley’s Space Sciences Laboratory (SSL) has led much of the new research. In April 2013 NASA awarded him up to $200 million to direct a major new project to clarify the dynamics of ionosphere storms and their interaction with the earth’s atmosphere.

Immel’s team at SSL will design, build and operate two instruments and oversee development of two others to be loaded on a solar-powered satellite for a two-year science mission tentatively set to launch in 2017. SSL engineers will control the spacecraft and instruments from its Mission Operations Center at the SSL, in the hills behind the Berkeley campus. The satellite is slated to orbit about 350 miles above the earth, sailing through the ionosphere.

“We’ve found that our own weather probably accounts for much of the extreme variability in the density of the plasma – the charged particles,” Immel says. “We realized that a mission like this could really resolve a lot of science questions that were just growing in number. We’re after it now.”

The mission is called the Ionospheric Connection Explorer (ICON), one of a series of NASA missions launched to resolve major puzzles about space physics. Berkeley’s SSL has directed five previous Explorer missions.

“SSL has been extraordinarily successful at NASA Explorer missions,” says Stuart Bale, SSL director and professor of physics at Berkeley. “We compete with institutions that are much bigger than we are, and we still win the missions. It says a lot about our strengths. It’s a great research ecosystem.”

“Tom has pioneered this research,” Bale says of the ionosphere mission. “He’s the one who had the insight to know this is an important science problem. And he worked very hard to get NASA to understand that. He’s a rising star.”

A lanky, sandy-haired Midwesterner, Immel looks like he finished grad school last year, but he’s been leading research on ionospheric physics at SSL for 13 years.

He devoted about five years to developing the ICON project before presenting it to NASA, and another three to four years of intense work will precede the launch. Then he’ll oversee everything from the launch to the final experiments about two years later. 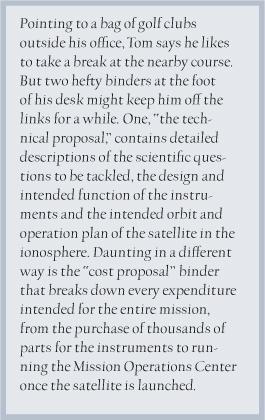 The ICON mission is designed to both map winds in the upper atmosphere and the plasma streaming through the ionosphere. The two instruments to be built by SSL will image the ionosphere continuously in both day and night. Another instrument will measure the speed and temperature of the atmospheric waves as they cross the boundary of space and charge into the ionosphere. A fourth will take measurements of the charged particles and plasma right where the satellite encounters them.

The four instruments will provide what Immel calls a recurring “magic science window” in which all the remote and local observations will be combined repeatedly over two years. Analysis on earth will capture
seasonal and inter-annual variations and provide a complete picture of causes and effects.

“These measurements will help explain how storms on earth contribute to the propagation of these waves and the increasing instability in the ionosphere,” he says.

Stepping outside the SSL building into a spring afternoon, Immel asks, “What’s the weather here going to be like tomorrow? Pretty much as it is today. But this persistence factor is pretty low in the ionosphere. Where we want to be in this field is to be able to predict space weather like earth weather. When guys in Afghanistan call and ask how we are doing for radio communications tomorrow, we want to have an answer.

In other words, Immel aims to become a bonafide space weather forecaster.