Initiated by CSULB Biology Professor Steven L. Manley and the Berkeley Lab’s Head of Applied Nuclear Physics Kai Vetter, the project will rely on samples of Giant Kelp and Bull Kelp from along the California coast.

“The California kelp forest is a highly productive and complex ecosystem and a valuable state resource. It is imperative that we monitor this coastal forest for any radioactive contaminants that will be arriving this year in the ocean currents from Fukushima disaster,” said Manley, an expert in marine algae and kelp. 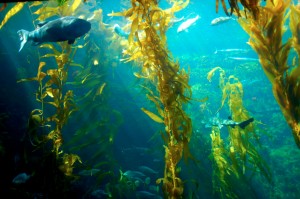 “I receive calls and emails weekly from concerned visitors and Californians about the effect of the Fukushima disaster on our California marine life,” he continued. “I tell them that the anticipated concentrations that will arrive are most likely very low but we have no data regarding its impact on our coastal ecosystem. Kelp Watch 2014 will provide an initial monitoring system at least in the short-term.”

The project includes the participation of 19 academic and government institutions and three other organizations/businesses. These participants will sample kelp from the entire California coastline as far north as Del Norte County and as far south as Baja California. The sampling will begin in mid-February and will end in late winter.

“What I have attempted to do is to organize marine scientists and educators from up and down the coastline to collect a large amount of kelp several times a year so that we can ascertain the amount of radioactive material entering our kelp forests,” Manley explained. “The response has been overwhelming.  Recently I was contacted by a scientist in Washington State, who wants to send samples. I said ‘Sure.’”

Sampling will take place several times in 2014, and processed kelp samples will be sent to the Lawrence Berkeley National Lab’s Low Background Facility for detailed radionuclide analysis. As data becomes available it will be posted for public access.

“Working with Dr. Vetter and his group is a perfect collaboration because of their vast experience in measuring radioactivity in a variety of biological samples, including seaweeds,” Manley noted. “His enthusiasm and support of Kelp Watch 2014 has been most gratifying. If the kelp takes up the radioactive material, we should detect it.”

Vetter, who is also a professor of nuclear engineering at UC Berkeley, pointed out that “UC Berkeley and Berkeley Lab’s analysis within the new Kelp Watch initiative is part of a larger, ongoing, effort to measure Fukushima related radionuclides in a large variety of objects.  We have two main objectives—to learn more about the distribution and transport of these materials in our world, and to make the results and explanations available to the public.

“Making our results available is a critical aspect of our work as it allows us to address concerns about Fukushima radiation levels and to explain the meaning and potential impact of these levels,” he added, “particularly in the context of the natural radiation background we are exposed to in our daily lives.”

“At the present time this entire initiative is unfunded by any state or federal agency, with time and costs being ‘donated’ by the participants,” Manley said. “I hope that this changes. USC Sea Grant funded an earlier related study of mine and I hope it or some other funding agency will help fund this more extensive project.

“Still, more participants are signing up weekly,” he concluded. “We encourage scientists, educational institutions and other interested organizations to participate in the collecting and/or processing.”

Those interested in taking part in the project can contact Manley at Steven.Manley@csulb.edu and should put “Kelp Watch 2014” in the subject line.