Researcher takes on ‘empathy fatigue’ in the workplace

A nurse refuses to help an ailing alcoholic who is upset to find a hospital detox unit closed. A hospital clerk brushes off a deceased woman’s grieving family as they try to pay her bills and claim her belongings. A charge nurse keeps the mother of gunshot victim from seeing her son, saying the emergency room is “too busy.”

These harsh, real-life scenarios helped inspire Eve Ekman, a doctoral student in social welfare at the University of California, Berkeley, to study empathy burnout in the workplace, a condition expected to skyrocket this year due to the stress caused by the nation’s financial crisis. 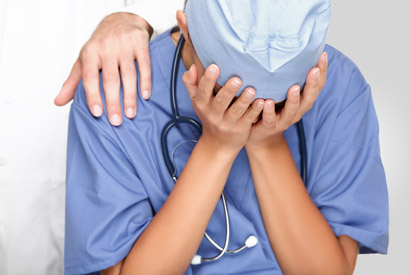 “Many professionals used to burn out and leave their jobs. Now they burn out and stay,” said Ekman, who has worked as a crisis counselor at San Francisco General Hospital for the last five years.

A research fellow at UC Berkeley’s Greater Good Science Center, Ekman is building a case that caregivers’ emotional exhaustion in the field of health and human services, and in other professions, is actually compounded by the distancing and dehumanizing behavior that they can employ to shield themselves from being overwhelmed.

”Chronic stress can lead to a sense of helplessness that can cause people to withdraw emotionally from their work in order to protect themselves,” Ekman said. “But dehumanization leads to a lack of work fulfillment that can prevent people from doing their jobs well.”

Ekman hypothesizes that clinical empathy, instead of emotional distancing, can help alleviate job burnout and energize caregivers to act with compassion. Instead of being discouraged at claims of growing ‘compassion fatigue,’ which refers to the emotional numbing that caregivers can experience, she has found herself heartened by how many continue to demonstrate compassion in their jobs despite the daily suffering they encounter.

“Ms. Ekman’s work highlights one of the coping mechanisms that individual frontline workers may use in the face of chronic emotional strain – a strategy that, as she notes, can be problematic over time as it can negatively affect the quality of care provided, not to mention the care provider’s own health and well-being,” said Rebecca Erickson, a sociology professor at the University of Akron in Ohio, and author of “Why Emotions Matter: Age, Agitation, and Burnout Among Registered Nurses,” which was published in the scholarly journal of the American Nurses Association.

“As each of us will, at some time, be in need of the emotional skills that caring laborers provide, research that focuses on caring for the caregiver has the potential to benefit us all,” Erickson added.

To test her theory about the benefits of clinical empathy, Ekman has launched a pilot project at the Juvenile Services Division of the San Mateo County Probation Department. A 2005 study funded by the National Institute of Justice showed alarmingly high levels of stress, burnout and turnover among parole and probation officers due to heavy caseloads, workplace conflicts and injuries, and low salaries.

Through surveys, interviews, focus groups and observations, Ekman is investigating whether promoting clinical empathy among San Mateo County correctional officers will guard against burnout despite the difficulty of their work, and whether promoting self-awareness will increase their empathy for others.

Ekman will use the data to create an innovative intervention and stress reduction program for child welfare agencies, hospitals, police departments and other workplaces experiencing growing caseloads, stress and high job turnover, she said.

Her mentors include UC Berkeley public health professor Jodi Halpern, who Ekman said taught her that the key to practicing clinical empathy is to “be engaged and curious about the life narrative of a client, but not become lost in a sympathetic merger with the client.”

So, when emergency room staff at San Francisco General expressed frustration at the arrival of yet another victim of gang warfare, and kept his mother from seeing him, Ekman went into the trauma room and talked to the young man, who was suffering from a punctured lung and broken ribs from bullet wounds.

He told Ekman that he had joined a community program to escape gang violence in his neighborhood. That led him to join the Merchant Marines. But the same day that he returned home to visit his ailing father, he was caught in a drive-by shooting. He speculated that gang members shot him for no other reason than that he was an unfamiliar face in their territory.

“I took the charge nurse aside, told her the story, and she immediately escorted his mother and brother to his room,” Ekman said. “I realized then how important it is to maintain curiosity and to be open to the factors that lead any patient to the place they are in.”