A research team led by EE Prof. Boubacar Kanté has created a new type of semiconductor laser, accomplishing an elusive goal in the field of optics: the ability to emit a single mode of light while maintaining the ability to scale up in size and power. The team showed that a structured semiconductor device implementing what they call an “open-Dirac potential” functions as a perfect, scalable laser cavity. They demonstrate that the laser emits a consistent, single wavelength, regardless of the size of the cavity. “Increasing both size and power of a single-mode laser has been a challenge in optics since the first laser was built in 1960,” said Kanté. “Six decades later, we show that it is possible to achieve both these qualities in a laser. I consider this the most important paper my group has published to date.” 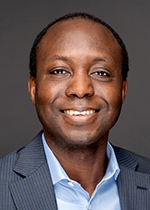