When QB3 opened its "garage" for bioscience entrepreneurs in 2006, detractors deemed it a quixotic venture, suer to fill with aspring startups that would never leave campus.

Six years later, QB3, or the California Institute for Quantitative Biosciences, and its partners have helped launch 60 new bioscience companies in a growing network of five incubators at the UCSF Mission Bay campus and across the bridge at UC Berkeley.

Starting in spaces as small as one  lab bench, or 90 square feet, those startups have gone on to create more than 280 jobs and have attracted $226 million in follow-on funding during one of the worst recessions in the nation’s history.

Of the 60 companies that have launched, 45 are still in the incubator network, while 13 have moved into commercial space or have been purchased by larger companies. Only two are no longer in business.

“This has been an unqualified success,” said Douglas Crawford, PhD, QB3’s associate director. “These incubators have enabled us to bridge the gap between great university science and commercial success.”

Among the first six startups, four raised venture capital in a tight funding market and a fifth was acquired by Affymetrix for $25 million. One of those six is Fluxion Biosciences, a research tools company launched by a UC Berkeley graduate student that has raised more than $16 million in venture funding and brought four cell-analysis devices to market to help in drug discovery and research.

“The vision for Mission Bay has always been as a place where scientists and entrepreneurs can take bold, new ideas to market faster and more successfully than anywhere else,” said San Francisco Mayor Edwin M. Lee.

“QB3 is an engine for new company creation which is driving job growth and economic activity in the city,” he said. “We are proud partners with QB3 in making San Francisco the innovation capital of the world.” 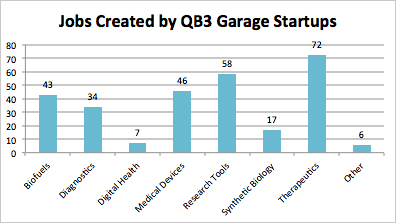 More than a third of these companies are direct spinoffs from University of California (UC) laboratories, representing one of QB3’s core missions of translating the public investment in UC science into companies and products that can directly benefit patients or society. The rest are entrepreneurs who sought out the QB3 incubators for their proximity to university science, technologies and the talent and connections needed in the starting phases of company growth.

“We needed to lower the barrier between great research and great impact to society,” Crawford said. “So we created this space where we can rent a single bench to a former graduate student or postdoc to take the idea out of the lab and create a company.”

The team envisioned a “garage” akin to the actual one-car garage that launched Hewlett Packard and the PC industry, but one suited to the needs of a bioscience company, with lab benches and access to equipment, scientific camaraderie and entrepreneurial expertise.

Until now, the only option for such a scientist was to rent 2,500 square feet of high-cost lab space in an industrial park until they could make it to the proof-of-concept stage that would attract investors. That’s tough to do on a credit card.

Starting with six small lab benches in January 2006, QB3 welcomed Fluxion as its first startup. Word quickly spread, until the institute was receiving one to four requests a week for space.

“The demand from entrepreneurs has been astounding,” said Kenneth Harrison, PhD, QB3’s Entrepreneurship Program manager, who leads the BioSF collaboration between QB3 and the City of San Francisco to promote bio-entrepreneurship. 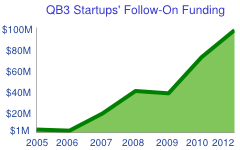 “For most of these companies, lab space was a critical barrier to commercialization. Having these companies located together helps us to identify other barriers as well,” he said. “Our goal is to eliminate all of these barriers, one by one, until San Francisco is the best place in the world at launching biotech companies.”

In 2009, QB3 partnered with FibroGen and the City of San Francisco to open its second incubator across the street from the UCSF campus, then two other incubators in Berkeley to fill the need. Last fall, the institute welcomed its fifth incubator space, this time back on the Mission Bay campus, as a dry-lab for companies working in bioinformatics.

Today, the companies range in focus from developing new biomaterials to discovering new ways of transporting chemotherapy drugs directly to cancer stem cells to target the most aggressive forms of cancer. Roughly half of the companies are working on new therapeutics or medical devices, while others work in areas such as biofuels and digital health, drawing from the extensive engineering and health expertise on the UC Berkeley and UCSF campuses.

Along the way, the institute also has created a package of services known as the QB3 Startup in a Box and a network of mentors and connections to support the fledgling companies as they move into larger spaces, seek federal or private funding, or hire scientific talent.

QB3 is a cooperative effort among private industry and more than 220 scientists at UCSF, UC Berkeley and UC Santa Cruz. One of four technology institutes created in 2000 by former California Governor Gray Davis, QB3 has a joint mission of supporting science, driving the California economy and transforming scientific research into public good.