A protein voyage into cells enabled by a short helical protein

The Schepartz lab(link is external)  at UC Berkeley recently reported a way to efficiently deliver therapeutic proteins into live cells and animals.

There are trillions of cells in the human body. A typical cell, analogous to a building, is composed of several major components: the plasma membrane (the building’s walls), the cytosol (the floor), the nucleus (central operations office), and other small membrane-bound organelles (additional rooms). 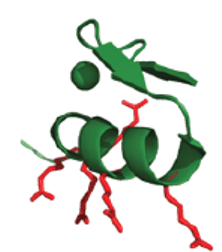 Similar to people entering and exiting the building, information and material exchange happen constantly in a cell. How does a cell determine what should enter and what should be locked out? Many of the regulations happen at the cell plasma membrane. The plasma membrane is a “wall” composed of a tightly packed double layer of greasy lipid molecules that surround the cell and the internal organelles. Like a gatekeeper, the plasma membrane only allows a small set of molecules to enter the cell. These molecules are often small and/or hydrophobic (“water-fearing”) compounds such as oxygen and carbon dioxide.

One class of molecules that are often blocked out of the cell are proteins. This is because proteins generally have large sizes — 100 times larger than a water molecule — and hydrophilic (“water-loving”) surfaces. Proteins are “Lego-like” molecules composed of small pieces of “building blocks” — amino acids — assembled into distinct three-dimensional shapes. Having versatile functions, proteins have important applications in both basic scientific research and industrial therapeutic development. For example, the protein insulin is used to treat diabetes, serving approximately eight million patients daily in the United States. However, the limited permeability of protein into cells has hindered the development of powerful protein tools that work inside a cell.

A recent work  published (link is external)by the Schepartz laboratory at the UC Berkeley Department of Chemistry explores how a short helical protein can facilitate the delivery of proteins into cells, potentially offering scientists a streamlined method to efficiently deliver therapeutics to patients

In the search for a vehicle that can effectively shuttle proteins into cells, the Schepartz lab designed a short helical protein, ZF5.3. ZF5.3 possesses a unique penta-arginine motif — five positively charged arginine amino acids arranged in a special three-dimensional shape. Through rigorous studies, the lab-confirmed ZF5.3 can both enter the cell readily by itself and when linked to other protein cargos.

Engineering an efficient protein delivery vehicle can advance greatly the development of better protein therapeutics. There are a couple of obstacles a protein needs to overcome to get into the cell. The challenge is really twofold: getting inside and getting out. First, a protein has to get past the cell membrane. The positive charges on ZF5.3 can bind the negative charges on the plasma membrane, establishing better contact with the cell.

“You can think about it like magnets,” explained Susan Knox, the first author of the paper published in ACS Central Science,(link is external) “where they attract with the positive and negative. The same thing happens here at the cell surface. Having a more positive molecule will make [the protein] associate more with the plasma membrane.” 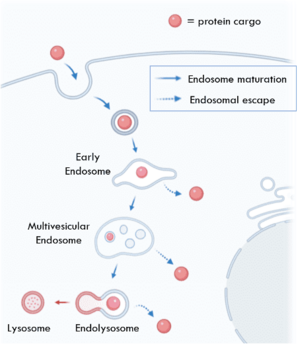 Two fates of a protein cargo (represented by the pink ball) after it is internalized by the cell into the endosome: endosomal entrapment resulting in ultimate degradation in the lysosome, or escape into the cytoplasm. (Figure created by Xizi “Kelsey” Zhang with BioRender.com)

Followed by binding, ZF5.3 linked proteins can be taken up by the cell through a natural process called endocytosis, during which they are encapsulated in a lipid bubble-like organelle: the endosome.

Next, in order for the protein to exert function in cells, it often needs to escape the endosome and access the cytosol or other cellular compartments. This is usually the hardest step. To enter the “building” of a cell, only qualified personnel with a key — ZF5.3-linked proteins — can have access through the “front gate” of the plasma membrane. After entering the building, a visitor needs to take an elevator — the endosome — to travel to different floors — various sites in the cell such as the cytoplasm, the nucleus, or other organelles. However, unlike the elevators in real life, the endosome is strictly gated: only a very limited number of people can actually exit the elevator, while the majority of them either remain stuck in the elevator or get shuttled back to the front floor and sent out of the building. Although many other cell-penetrating moieties reported in the field have the ability to increase protein uptake into the cell, inside the endosome, very few can actually escape the endosome. As a result, most of the materials delivered to cells have the fate of being trapped in the endosome. ZF5.3, on the contrary, utilizes a special machine called the HOPS complex in the cell to escape the endosome, achieving a protein delivery efficiency higher than many common cell-penetrating moieties.

Fluorescence correlation spectroscopy, the security camera looking at cells
To better study the efficiency of protein delivery, the Schepartz lab utilizes a technique called fluorescence correlation spectroscopy (FCS). “FCS is a biophysical tool, where we can look at the changes in fluorescence intensity over time, and then calculate how much material is inside the cell,” says Knox. While there are a number of methods for evaluating if a protein is taken up by the cell, researchers have struggled to find a method to accurately determine the amount of protein delivered into the cell — outside of the endosome. Taking the previous building and elevator analogy: while it is easy to find out if a person has entered the building, it is difficult to identify the population that is stuck in the elevator from those who have left the elevator and are now on other floors of the building different floors.

With FCS, we can obtain “a direct and absolute measurement of the amount of material that gets into the cell,” Knox notes. Like a security camera, FCS allows scientists to focus on the population that escapes the endosome. Based on the FCS results, scientists can accurately calculate how many people are on each floor — the concentration of proteins in each cellular compartment, and how fast each person is moving on that floor — the diffusion time of target proteins.

Exploring the therapeutic power of ZF5.3

Enzyme replacement therapy — a treatment that replenishes proteins that are missing or abnormal in cells — is a promising therapeutic approach for many genetic diseases. However, this treatment has only been applied to a limited number of diseases, specifically those that only require a protein acting in the bloodstream (outside of the cell) or in the endosome/lysosome (no need to escape). ZF5.3 has now opened up the door of intracellular protein delivery, and the possibility of curing many other diseases using enzyme replacement therapy.

To harness the therapeutic power of ZF5.3, Knox and her colleagues at UC Berkeley and Yale University linked ZF5.3 to a therapeutically relevant protein — argininosuccinate synthetase (AS) — implicated in the disease Citrullinemia type I (CTLN-I). AS is an important protein in the urea cycle in humans that turns ammonia into secretable urea. The deficiency of AS in cells leads to a disrupted urea cycle and a buildup of toxic ammonia in cells. Currently, there is no cure for CTLN-I. Thus, replenishing AS using ZF5.3 as a delivery vehicle will be a promising therapeutic option that greatly improves the quality of life of patients.

With the help of ZF5.3, AS is able to reach the cytosol of model cell lines and the livers of healthy mice at a sufficiently high concentration to have potential therapeutic effects. “This is the first time in our published work we demonstrated ZF5.3’s power to deliver a therapeutically relevant protein and furthermore putting it into an animal,” Knox comments. Seeing the results as an exciting first step for future therapeutic applications, Knox says, “we can start to do studies on disease-related animals to ask how much protein can researchers use in an animal to see therapeutic benefits? As well as where in the animal does the protein go?”

There are still many unresolved questions regarding ZF5.3, and the Schepartz lab is taking many different directions to continue contributing to the delivery field. “Going forward, the big question is: how does ZF5.3 selectively navigate across the membrane of an internal organelle, and what does this biological insight teach us about new, perhaps different, strategies for macromolecular delivery?” says Schepartz. “Of course, improving ZF5.3 and its delivery is a huge goal that is actively being pursued.”

Co-authors of the paper include Susan Knox, Rebecca Wissner, Samantha Piszkiewicz, and Alanna Schepartz. This work is supported by the Blavatnik Fund for Innovation(link is external) at Yale University. A.S., S.L.K., R.W., and S.P. are named inventors of a pending patent application related to the work described.