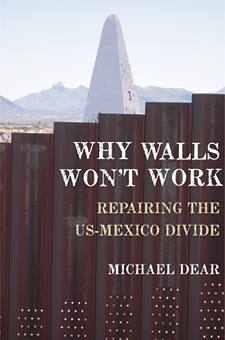 As the United States reconsiders immigration policy reform – particularly between the United States and Mexico – the focus should be on immigration and integration instead of tougher border security,  says University of California, Berkeley, professor of city and regional planning Michael Dear, the author of the new book, “Why Walls Won’t Work:Repairing the US-Mexico Divide.”

Dear logged nearly 10,000 miles visiting both sides of the border, from Tijuana/San Diego at the Pacific Ocean to Matamoros/Brownsville on the Gulf of Mexico.

During his journeys, he witnessed the construction of the border fortifications and the rapid expansion of “the U.S. border industrial complex.” He also recorded the wall’s detrimental effects on lives and communities, as well as how the affected communities adjusted to the changes brought by the barrier.

In “Why Walls Won’t Work,” Dear shares his accounts of present borderland realities and everyday life, illuminated by sharp insights into U.S. geopolitics, immigration issues, Mexico’s current challenges and a deep knowledge of centuries of the intercultural history of the U.S.-Mexico borderlands.

He explores the activities of self-styled immigration vigilantes as well as the work of the “No More Deaths” group that tries to prevent border-crossing deaths from dehydration and the like, the art of national boundary markers, fabric artists from both sides of the border, and the costly national security installations by private corporations such as Boeing and Blackwater.

As the immigration debate moves forward, Dear, who curated the recent 2012 exhibition ‘Trazando la Línea/Tracing the Line” at the Centro Estatal de las Artes in Mexicali, Baja California, urges an intervention that he says recognizes the enduring social consensus and fundamental interdependence that define the U.S.-Mexico borderlands.

Dear bases his recommendations on the lessons he learned from what he calls the borderland’s “third nation.”

In spite of the massive fortifications between the United States and Mexico, and drug wars that continue to plague many trans-border communities, Dear reports in “Why Walls Won’t Work” that U.S.-Mexico border states are among the fastest-growing regions in both countries, as well as places of cross-border connectedness and vibrant political and cultural change.

The region’s influence is strongly felt well beyond the border and “to understand LA, you have to understand Mexico,” says Dear, a former Angeleno before he joined UC Berkeley’s College of Environmental Design faculty.

“Mutual interdependence has always been a hallmark of cross-border lives. Residents on both sides of the line regard parts of Mexico and the United States as their home. For them, the border is a connective membrane, not a line of demarcation … The border fence, however, undermines this cooperation and cohesion, as it splinters lives and scars landscapes,” wrote Dear in a March 11, 2013 New York Times op-ed.

Dear says that walls like the 2,000-mile montage that extends across sandy beach fronts, parched deserts and craggy mountain tops between the United States and Mexico are historic aberrations that ultimately come down – whether in Berlin, China or Ciudad Juárez.

Border expert Norma V. Iglesias-Prieto, an associate professor of Chicana and Chicano Studies at San Diego State University whose research focuses on cultural of the U.S.-Mexican border, commented on Dear’s new book: “Dear shows us how to think about the possibility of a border region without walls. He challenges the whole idea of a ‘border’ and provides a powerful counterargument to the discourses of fear that permeate perceptions of one of the world’s most sensitive geopolitical edges.”

Dear, the author/editor of more than a dozen books, will give a keynote presentation about the border wall and his research at the annual meeting of the Association of American Geographers in Los Angeles on April 11. He also will sign books and be available for interviews.