In a new study suggesting pesticides may be associated with the health and development of children, researchers at the University of California, Berkeley’s School of Public Health have found that prenatal exposure to organophosphate pesticides – widely used on food crops – is related to lower intelligence scores at age 7.

The researchers found that every tenfold increase in measures of organophosphates detected during a mother’s pregnancy corresponded to a 5.5 point drop in overall IQ scores in the 7-year-olds. Children in the study with the highest levels of prenatal pesticide exposure scored seven points lower on a standardized measure of intelligence compared with children who had the lowest levels of exposure.

“These associations are substantial, especially when viewing this at a population-wide level,” said study principal investigator Brenda Eskenazi, UC Berkeley professor of epidemiology and of maternal and child health. “That difference could mean, on average, more kids being shifted into the lower end of the spectrum of learning, and more kids needing special services in school.”

The UC Berkeley study is among a trio of papers showing an association between pesticide exposure and childhood IQ to be published online April 21 in the journal Environmental Health Perspectives. Notably, the other two studies – one at Mt. Sinai Medical Center, the other at Columbia University – examined urban populations in New York City, while the UC Berkeley study focused on children living in Salinas, an agricultural center in Monterey County, California.

The studies in New York also examined prenatal exposure to pesticides and IQ in children at age 7. Like the UC Berkeley researchers, scientists at Mt. Sinai sampled pesticide metabolites in maternal urine, while researchers at Columbia looked at umbilical cord blood levels of a specific pesticide, chlorpyrifos.

“It is very unusual to see this much consistency across populations in studies, so that speaks to the significance of the findings,” said lead author Maryse Bouchard, who was working as a UC Berkeley post-doctoral researcher with Eskenazi while this study was underway. “The children are now at a stage where they are going to school, so it’s easier to get good, valid assessments of cognitive function.”

Organophosphates (OP) are a class of pesticides that are well-known neurotoxicants. Indoor use of chlorpyrifos and diazinon, two common OP pesticides, has been phased out over the past decade, primarily because of health risks to children.

The 329 children in the UC Berkeley study had been followed from before birth as part of the Center for the Health Assessment of Mothers and Children of Salinas (CHAMACOS), an ongoing longitudinal study led by Eskenazi. The new findings on IQ come less than a year after another study from the CHAMACOS cohort found an association between prenatal pesticide exposure and attention problems in children at age 5.

Researchers began enrolling pregnant women in the study in 1999. During pregnancy and after the children were born, study participants came to regular visits where CHAMACOS staff administered questionnaires and measured the health and development of the children.

During the visits, samples of urine were taken from the participants and tested for dialkyl phosphate (DAP) metabolites, the breakdown product of about 75 percent of the organophosphorus insecticides in use in the United States. Samples were taken twice during pregnancy, with the two results averaged, and after birth from the children at regular intervals between ages 6 months and 5 years.

The Wechsler Intelligence Scale for Children – Fourth Edition (WISC-IV) was used to assess the cognitive abilities of the children at age 7. The test includes subcategories for verbal comprehension, perceptual reasoning, working memory and processing speed.

In addition to the association with overall IQ scores, each of the four cognitive development subcategories saw significant decreases in scores associated with higher levels of DAPs when the mothers were pregnant. The findings held even after researchers considered such factors as maternal education, family income and exposure to other environmental contaminants, including DDT, lead and flame retardants.

“There are limitations to every study; we used metabolites to assess exposure, so we cannot isolate the exposure to a specific pesticide chemical, for instance,” added Eskenazi. “But the way this and the New York studies were designed – starting with pregnant women and then following their children – is one of the strongest methods available to study how environmental factors affect children’s health.”

While markers of prenatal OP pesticide exposure were significantly correlated with childhood IQ, exposure to pesticides after birth was not. This suggests that exposure during fetal brain development was more critical than childhood exposure.

Levels of maternal DAPs among the women in the UC Berkeley study were somewhat higher than average compared with the U.S. population, but they were not out of the range of measurements found among women in a national study. 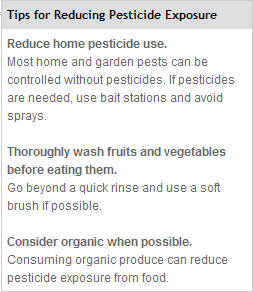 “These findings are likely applicable to the general population,” said Bouchard, who is currently a researcher at the University of Montreal’s Department of Environmental and Occupational Health. “In addition, the other two studies being published were done in New York City, so the connection between pesticide exposure and IQ is not limited to people living in an agricultural community.”

The prenatal exposures measured in this paper occurred in 1999-2000. Overall, OP pesticide use in the United States has been trending downward, declining more than 50 percent between 2001 and 2009, and about 45 percent since 2001 in California. At the same time, the use of OP pesticides in Monterey County remained steady between 2001 and 2008, but declined 18 percent from 2008 to 2009. Several studies suggest that exposure to OP pesticides has gone down with declining use.

According to the Centers for Disease Control, people are exposed to OP pesticides through eating foods from crops treated with these chemicals. Farm workers, gardeners, florists, pesticide applicators and manufacturers of these insecticides may have greater exposure than the general population.

“Many people are also exposed when pesticides are used around homes, schools or other buildings,” said study co-author Asa Bradman, associate director of the Center for Environmental Research in Children’s Health (CERCH) at UC Berkeley.

The researchers recommend that consumers reduce their home use of pesticides, as well as wash their fruits and vegetables, as ways to reduce exposure to organophosphate pesticides.

“I’m concerned about people not eating right based on the results of this study,” said Eskenazi. “Most people already are not getting enough fruits and vegetables in their diet, which is linked to serious health problems in the United States. People, especially those who are pregnant, need to eat a diet rich in fruits and vegetables.”

The three pesticide studies in Environmental Health Perspectives are available for free  online:

The journal has also issued a press release on the pesticide papers.