For post-boomers, public education is worth more than Social Security and Medicare

It's easy to assume retiring baby boomers will benefit from Social Security and Medicare at the expense of younger generations, as analysts estimate that these government-run programs will pay out more than they collect in payroll taxes by 2017.

But a far-reaching new study from the University of California, Berkeley, concludes that younger Americans - specifically those born between 1972 and 2060 - are actually getting the better deal when the value of public education is factored in as an intergenerational entitlement program on a par with Social Security and Medicare. 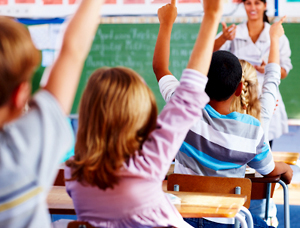 "Receiving public education is a really big benefit, and the fact that kids get it at the start of their lives rather than at the end makes it even more valuable," said Ronald Lee, a UC Berkeley demographer and economist who coauthored the study, "Who wins and who loses? Public transfer accounts for U.S. generations born 1850-2090."

On average, Americans pay the taxes that subsidize education 30 years after receiving the benefits, the study noted. By contrast, people start drawing their Social Security and Medicare benefits 30 years or so after paying taxes into these government funds. Thus, each education dollar is worth $10 in retirement benefits, according to the study, which is published in the March issue of the journal Population and Development Review.

Contrary to conventional wisdom, "older Americans are not making out like bandits when you factor in the value of public education," Lee said.

Previous studies on government entitlement programs, also called public transfer accounts, have looked at public pension and health plans only when balancing the transfer of benefits from one generation to the next, concluding that the baby boomers - those born between 1946 and 1964 - will strain and possibly even drain Social Security and Medicare, threatening to leave future workers with government IOUs.

Using historical data and future projections, Lee and his research team calculated the net value of Social Security, Medicare and public education at all levels - minus taxes - for Americans born from 1850 through 2090. They found that people ages 38 and younger - including those born 20 years from now - will make net gains in earnings of 4 to 6 percent over their lifetimes. By contrast, those now aged 63 to 80 will have paid out more in taxes than they will have received in Social Security, Medicare and public education benefits, losing 1 to 2 percent in net earnings over their lifetimes.

The researchers' calculations are based on a person's "net present value at birth," which takes into account the taxes paid and benefits received throughout a person's life, then establishes his or her worth as a lump sum today.

While the study found greater benefits for those born after 1972, it projects that tougher times are ahead for generations born 50 years from now. Unless significant changes are made to the Social Security and Medicare programs, those later generations would have to be heavily taxed - 44 percent of their lifetime earnings - and their benefits reduced, to make up for severe shortfalls due to population aging and escalating health care costs, according to the study.

Nearly 80 million baby boomers are phasing into retirement and by 2017, Social Security is expected to pay out more than it collects in payroll taxes, according to a recent report from the Social Security and Medicare Board of Trustees.

"The current young and future generations are sometimes viewed as victims of profligate public policy in the United States, whereby the current elderly cohorts live comfortably at their expense," the UC Berkeley study said.

"In fact, however, an elderly person born in 1936 experienced a net loss of about 2 percent of lifetime earnings, while a baby born today is projected to realize a net gain of 5 percent ... Evidently, adding education to the mix dramatically changes the generational equity picture," the study concluded.