In the new report, “Job Quality in a Meal-Kit Fulfillment Center,” the researchers conducted confidential interviews and focus groups with frontline workers who assemble and pack boxes in one refrigerated fulfillment center in California. The researchers gathered in-depth accounts of the quality of the jobs created by the tech food revolution. 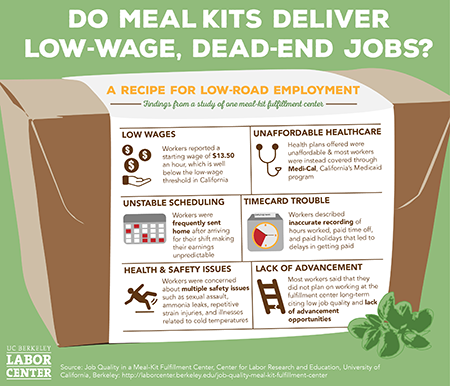 “Meal-kit start-ups are using technology to make home cooking easier for well-off consumers, but our findings suggest that they are using the same kind of low-road business model that has trapped workers — especially workers of color — in low-wage jobs for decades,” said Sarah Thomason, report co-author.

“Meal-kit delivery might be a rising star of the new food economy, but there is nothing new about the bad quality of these jobs,” she said.

Meal-kit delivery companies such as Plated, HelloFresh, Blue Apron and SunBasket have grown rapidly over the last 10 years. Collectively, this emerging segment of the food industry has attracted more than $650 million in venture capital investment and generated an estimated $1.5 billion in annual revenue.

“Meal-kit delivery companies set out to disrupt the American kitchen,” said Annette Bernhardt, director of the Low-Wage Work program at the Labor Center. “Unfortunately, our findings suggest that they failed to disrupt and instead are replicating the low-wage business model that dominates the food industry,” she said.