Pain and itch connected down deep 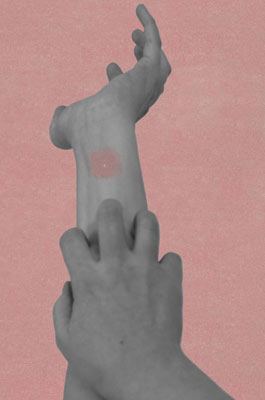 The interactions between itch and pain are only partly understood, said itch and pain researcher Diana Bautista, an assistant professor of molecular and cell biology at the University of California, Berkeley. The skin contains some nerve cells that respond only to itch and others that respond only to pain. Others, however, respond to both, and some substances cause both itching and pain.

If itch and pain are closely linked, however, the implications are huge, Bautista said. If pain and itch use the same molecules to communicate with the brain, drugs now being developed to alleviate pain may also help quiet intractable itch.

“Some types of itch respond to antihistamines, but most itch, especially itch associated with chronic diseases like kidney and liver failure, diabetes and cancer, does not,” she said. “Even allergic itch only partly responds to antihistamines. We’ve shown that one of the drugs now being looked at by pharmaceutical companies as a pain reliever also blocks some types of histamine-independent itch.”

Other recent studies have shown that some itch inducers – called pruritogens – lead to activation of the capsaicin receptor, a pain receptor named for the incendiary chemical in chili peppers.

“It’s starting to look like many pain receptors are linked to the itch system,” she said. “Both itch and pain use some of the same molecules to send signals to the brain.”

Bautista has genetically altered mice so that they don’t produce the wasabi receptor, and hopes that the mouse strain will help lead to a better understanding of forms of itch that do not respond to antihistamines.

Itch and pain aspects of touch

Pain and itch are extremes of our sense of touch, which itself is not well understood, Bautista said. While research has shown in detail how touch receptors on the skin map to the brain, “it’s really an open question which molecules are involved in detecting tactile stimuli, like vibrations or light touch, and how these molecules are modulated.”

In her lab, she applies a huge variety of chemical and physical stimuli to the skin in order to study and isolate the specific receptors that respond to such stimuli. She also grows skin cells and sensory neurons in dishes to probe them more thoroughly.

“One of the cool things about touch cells is you can put them in a dish, and you can poke them, and they’ll respond to touch with an electrical signal,” Bautista told the Daily Californian news outlet last year.

Five years ago, Bautista showed that allyl isothiocyanate, the sinus-clearing ingredient in wasabi, hot mustard and garlic, causes pain solely by activating a receptor called TRPA1 on sensory nerves. The receptor is one of a group of transient receptor potential (TRP) ion channels in sensory nerves under the skin, including the mouth and mucus membranes, which detect temperature, mechanical abrasion and irritating chemicals. The capsaicin and heat receptor, dubbed TRPV1 is another such ion channel, as is TRPM8, a cold-activated channel targeted by menthol and other cooling agents. When these receptors are activated, they open up and depolarize the nerve cell, which transmits an attention-grabbing pain signal through the spinal cord to the brain.

The pain work led to an interest in itch, and Bautista has accumulated a variety of agents that stimulate the itch reflex, including the plant called cowhage (Mucuna pruriens) and the drug chloroquine, an antimalarial that often causes a hellish, all-over itch. In some African countries, up to 70 percent of the population develops itch from chloroquine, which causes many people to stop taking it.

Only between 5 and 20 percent of the skin’s sensory nerves are sensitive to itch, and one group of them has histamine receptors that can be blocked by antihistamines to stop the itch. Both chloroquine and cowhage, however, cause a histamine-independent itch, as do opium compounds; inflammation, from asthma and allergies to skin rash; and eczema. These are currently untreatable and the focus of Bautista’s research.

A common feature of itch receptors is that they are members of a family of G protein-coupled receptors widely used by the body to transmit signals from outside the cell into the cell interior. Bautista’s colleague Xinzhong Dong in the Solomon H. Snyder Department of Neuroscience at Johns Hopkins University School of Medicine in Baltimore recently identified two new itch receptors, both of them Mas-related G protein-coupled receptors. One, MrgprA3, is stimulated by chloroquine, while the second, MrgprC11, is stimulated by BAM8-22, a peptide released by immune cells, including mast cells, during inflammation.

If sensory nerves contain pain receptors like TRPA1 and TRPV1, and itch receptors like MrgprA3 and MrgprC11, how does the cell distinguish between itch and pain? Bautista asked.

Bautista tested both chloroquine and the mast cell chemical BAM8-22 on cultured mouse cells and found that both activate the wasabi receptor, TRPA1, causing a depolarization of nerve cells. In addition, knock-out mice that lack the receptor do not respond to either chemical, while a chemical that blocks the receptor also stops the itch.

“These experiments provide a wonderful demonstration that chloroquine and BAM8-22 cause itch only through the wasabi receptor,” she said. “If both pathways converge on the same ion channel, perhaps other molecules that cause itch also use this channel.”

The work is funded by the National Institutes of Health, including an NIH Innovator Award, the Pew Scholars Program, the Rita Allen Foundation, the McKnight Scholars Fund and the National Science Foundation.