The number of young adults who fall at or below the federal poverty line has risen in the last 10 years, according to a new issue brief from the Berkeley Institute for the Future of Young Americans, a research center at UC Berkeley’s Goldman School of Public Policy.

The paper, released Wednesday, reveals that the number of young people between 18 and 24 years old who live in poverty has increased over the last decade, with almost 24 percent of 21-year-olds falling below the federal poverty line.

“Young adults have come of age during one of the worst recessions in U.S. history, without much of a social safety net to protect them,” said James Hawkins, associate director of the institute and the author of the brief. “Policymakers need to realize that young adults today largely have been left behind in the war on poverty.”

The results point to the difficult transition young adults face as they move from high school to work, enroll in college or seek employment after graduating from college.

The findings showed that 20- to 22-year-olds experienced greater concentrations of poverty between 2008 and 2015, while poverty rates for other age groups generally flattened out during the same period. 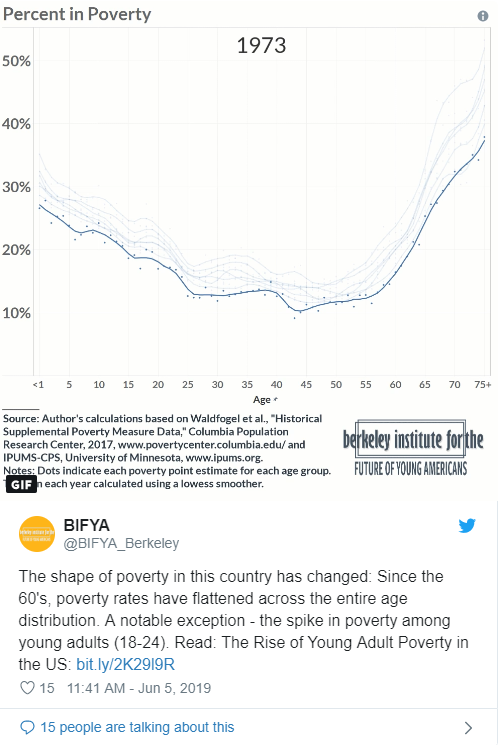 The paper also found that since the 1980s, the share of young adults in full-time university programs who are also in poverty has doubled.

“Anti-poverty efforts have targeted the very young and the very old, bringing down rates of poverty for both,” said Sarah Swanbeck, executive director of the institute. “But the social safety net largely misses young adults who are now experiencing among the highest rates of poverty for any age group in the U.S.”

The issue brief analyzed historical data from the Integrated Public Use Microdata Series at the University of Minnesota and the Center on Poverty and Social Policy at Columbia University.