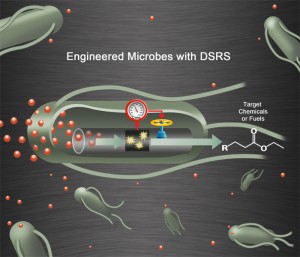 Significant boosts in the microbial production of clean, green and renewable biodiesel fuel has been achieved with the development of a new technique in synthetic biology by researchers with the U.S. Department of Energy (DOE)’s Joint BioEnergy Institute (JBEI). This new technique – dubbed a dynamic sensor-regulator system (DSRS) – can detect metabolic changes in microbes during the production of fatty acid-based fuels or chemicals and control the expression of genes affecting that production. The result in one demonstration was a threefold increase in the microbial production of biodiesel from glucose.

“The DSRS is an amazing and powerful new tool, the first example of a synthetic system that can dynamically regulate a metabolic pathway for improving production of fatty acid-based fuels and chemicals while the microbes are in the bioreactor,” says Jay Keasling, CEO of JBEI and one of the world’s foremost practitioners of synthetic biology, who led this research.

Keasling, who also serves as the Associate Laboratory Director for Biosciences at Lawrence Berkeley National Laboratory (Berkeley Lab) is the corresponding author of a paper describing this research in Nature Biotechnology. The paper is titled “Design of a dynamic sensor-regulator system for production of FAbased chemicals and fuels.” Co-authors are Fuzhong Zhang and James Carothers of JBEI’s Fuels Synthesis Division, which is directed by Keasling.

The need for new transportation fuels that are renewable and can be produced in a sustainable fashion has never been more urgent. Scientific studies have consistently shown that liquid fuels derived from plant biomass are one of the best alternatives if a cost-effective means of commercial production can be found. Major research efforts to this end are focused on fatty acids – the energy-rich molecules in plant cells that have been dubbed nature’s petroleum. Fatty acids now serve as the raw materials not only for biodiesel fuel, but also for a wide range of important chemical products including surfactants, solvents and lubricants.

“Microbial production of fuels and chemicals from fatty acids is a greener and sustainable alternative to chemical synthesis,” says Zhang, who is the lead author of the Nature Biology paper. “However, high productivities, titers and yields are essential for microbial production of these chemical products to be economically viable, particularly in the cases of biofuels and low-value bulk chemicals.”

“Expression of pathway genes at too low a level creates bottlenecks in biosynthetic pathways, whereas expression at too high a level diverts cellular resources to the production of unnecessary enzymes or intermediate metabolites that might otherwise be devoted to the desired chemical,” Zhang says. “Furthermore, the accumulation of these enzymes and intermediate metabolites can have a toxic effect on the microbes, reducing yield and productivity.”

Using the tools of synthetic biology, there have been several strategies developed to meet this challenge but these previous strategies only provide static control of gene expression levels.

“When a gene expression control system is tuned for a particular condition in the bioreactor and the conditions change, the control system will not be able to respond and product synthesis will suffer as a result,” Zhang says.

The DSRS responds to the metabolic status of the microbe in the bioreactor during synthesis by sensing key intermediate metabolites in an engineered pathway. The DSRS then regulates the genes that control the production and consumption of these intermediates to allow their delivery at levels and rates that optimize the pathway for maximum productivity as conditions change in the bioreactor.

“Nature has evolved sensors that can be used to sense the biosynthetic intermediate, but naturally-occurring regulators will rarely suffice to regulate an engineered pathway because these regulators were evolved to support host survival, rather than making chemicals in large quantity,” Zhang says.

To create their DSRS, Zhang, Keasling and Carothers focused on a strain of Escherichia coli (E. coli) bacteria engineered at JBEI to produce diesel fuel directly from glucose. E. coli isa well-studied microorganism whose natural ability to synthesize fatty acids and exceptional amenability to genetic manipulation make it an ideal target for biofuels research. In this latest work, the JBEI researchers first developed biosensors for a key intermediate metabolite – fatty acyl-CoA – in the diesel biosynthetic pathway. They then developed a set of promoters (segments of DNA) that boost the expression of specific genes in response to cellular acyl-CoA levels. These synthetic promoters only become fully activated when both fatty acids and the inducer reagent known as “IPTG” are present.

“For a tightly regulated metabolic pathway to maximize product yields, it is essential that leaky gene expressions from promoters be eliminated,” Zhang says. “Since our hybrid promoters are repressed until induced by IPTG, and the induction levels can be tuned automatically by the FA/acyl-CoA level, they can be readily used to regulate production of biodiesel and other fatty acid-based chemicals.”

Introducing the DSRS into the biodiesel-producing strain of E.coli improved the stability of this strain and tripled the yield of fuel, reaching 28-percent of the theoretical maximum. With further refinements of the technique, yields should go even higher. The DSRS should also be applicable to the microbial production of other chemical products, both fatty acid-based and beyond.

“Given the large number of natural sensors available, our DSRS strategy can be extended to many other biosynthetic pathways to balance metabolism, increase product titers and yields, and stabilize production hosts,” Zhang says. “It should one day be possible to dynamically regulate any metabolic pathway, regardless of whether a natural sensor is available or not, to make microbial production of commodity chemicals and fuels competitive on a commercial scale.”