Researchers at the University of California, Berkeley, examined the district’s unprecedented school building program, financed by $19.5 billion in voter-approved state and local bonds. With the exception of the federal interstate highway system, this is the largest public works project ever undertaken in the United States.

They found that thousands of children moving into new elementary schools over the 2002-2008 construction period enjoyed strong achievement gains that equaled up to 35 additional days of instruction, compared with the progress made by the average LA Unified student. Achievement gains for pupils moving to new facilities were stronger in English- language arts than in mathematics.

“Parents and teachers cast a skeptical eye toward reform fads that come and go,” said Bruce Fuller, a UC Berkeley professor of education and public policy who directed the project. “This is an eye-popping gain for young students moving into new schools. We rarely see benefits for kids that equate to almost two months of added instructional time.”

“The lack of robust achievement benefits for students who moved to a new high school facility is cause for concern,” said the report. “Something is missing beyond fresh facilities as the district attempts to lift achievement inside high schools.”

The gains for young students may be driven by the younger teachers with graduate degrees drawn into LA Unified’s new elementary schools, researchers said. The new schools held onto these younger teachers longer, compared with older schools, where a higher share of teachers exited at year’s end. Still, the boost for elementary students remained statistically significant, the researchers said, even after adjusting for teacher qualities, suggesting that other explanations are at play.

“How new elementary schools are lifting achievement remains somewhat of a mystery,” said William Welsh, the UC Berkeley Ph.D. student who carried out the statistical analysis. “New schools in LA Unified are much smaller than older schools, perhaps offering warmer, personal settings that are more conducive to kids’ learning.”

The sprawling Los Angeles Unified School District serves more than 850 schools and related facilities today, with an enrollment of over 660,000 for 2011-2012. Results of the district-invited study will help LA Unified – and other urban school districts across the country – decide whether building new schools or shrinking overcrowded campuses is the best path toward lifting student achievement.

The UC Berkeley researchers could find no correlation between the magnitude of achievement gains and the average amount that LA Unified spent to erect new schools per pupil – just under $15,000 per student. “We found no evidence suggesting that more expensive school facilities yield stronger achievement,” Fuller said.

The UC Berkeley team assessed the scholastic impact of the construction program for over 20,000 LA Unified elementary school students who moved from an old facility to a new or renovated and less crowded one between 2002 and 2008, when the bulk of new schools opened. They looked for possible changes beginning two years after the students settled into their new facilities, which ranged from small, early learning centers to large, elegant high schools.

The study focused on children who moved from an overcrowded to a new school to control on possible variation in student background, prior test scores and teacher quality. 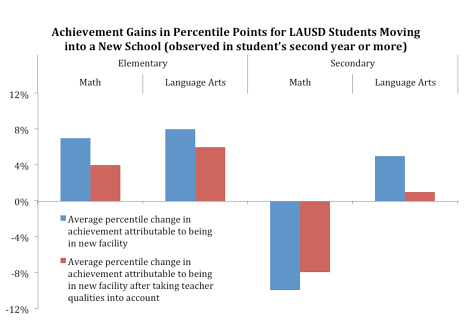 Achievement gains were even stronger for elementary students escaping the most severely overcrowded schools and landing at a new campus – gains equivalent to lengthening the school year by up to 65 days, said the report.

“We know that new schools returned to a longer school year, after overcrowded schools were forced to serve kids on multiple tracks and cut the school year by 17 days,” Welsh said. “But the gains we see in new elementary schools surpass the benefits linked to recovering these instructional days.” The LA Unified school board recently voted to again reduce the school year for all schools.

The UC Berkeley team identified “all star” elementary schools that displayed even stronger results after opening their doors.

New-school impacts were not examined for middle school students, or for children in pre-K, kindergarten or first grade. Facilities that house continuation high schools or schoolwide special education programs were excluded as well.

The report, “New Schools, Overcrowding Relief and Achievement Gains in Los Angeles – Strong Returns from a $19.5 Billion Investment,” is available online (include link). It is published today by Policy Analysis for California Education (PACE), an independent think tank located at UC Berkeley, Stanford University and the University of Southern California.