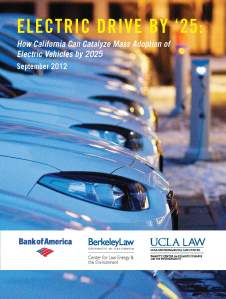 The environmental law centers at UCLA and UC Berkeley Schools of Law today released a new report on industry actions and federal, state, and local policies needed to stimulate long-term, mass adoption of electric vehicles.  “Electric Drive by ’25″ (available from either UCLA Law or Berkeley Law) is the tenth report in our Climate Change and Business Research Initiative, funded by Bank of America.

Please join me and my UC colleagues today, either in person or via webcast, for a noon (ET) briefing on the report on Capitol Hill in Washington, DC, sponsored by Congressman Henry Waxman. A panel discussion with electric vehicle stakeholders and experts will follow. Registration and webcast access is available here.

Electric vehicle technology is crucial for meeting California’s environmental and energy goals, given that fossil fuel-burning engines contribute almost 40 percent of the state’s greenhouse gas emissions and that advancements in battery technology have the potential to revolutionize how we integrate and store variable renewable energy. The technology can also boost California’s and the nation’s economy by allowing drivers to benefit from domestically produced fuel (in the form of electricity), while many of the electric vehicle manufacturers, charging companies, and component suppliers are based in California.

Electric Drive by ’25 resulted from a stakeholder gathering that included automakers, electric utilities, charging companies, advocates, and public agency officials. Based on their input, the report finds that the critical long-term challenges to mass consumer adoption are a lack of consumer awareness about the vehicles and their performance, high upfront costs and limited battery range of certain models, and concerns about the adequacy of the public charging network and related infrastructure.

To address these challenges, the report recommends that industry and policy makers educate consumers about the vehicles and their performance through a concerted and sustained outreach campaign, lower the upfront costs of the vehicles through reduced taxes and fees and continued rebates, and plan for and facilitate deployment of an efficient and easy-to-use charging infrastructure.

With electric vehicle sales of the Nissan Leaf and Chevy Volt already outpacing conventional hybrid sales at a similar point in their history, and with all the major automakers planning to introduce plug-in models, the future looks bright for the technology. But policy makers and industry should continue to take steps now to ensure that an electric drive will be the norm across California and the nation by 2025.