New helmet design can deal with sports’ twists and turns

As a neurologist, Robert Knight has seen what happens when the brain crashes around violently inside the skull. And he’s aware of the often tragic consequences.

Throughout his 40 years as an academic researcher and medical doctor, the University of California, Berkeley, professor of psychology and neuroscience has known students and friends whose lives and careers were derailed by head injuries from bicycle and car crashes. He’s held in his hands brains destroyed by accidental blows to the head.

Not surprisingly, he cringes when he imagines his young grandchildren falling off a bike and hitting their heads.

So, Knight invented a better helmet — one with more effective padding to dampen the effects of a direct hit, but more importantly, an innovative outer shell that rotates to absorb twisting forces that today’s helmets don’t protect against.

His design is flexible enough to provide protection for football and hockey players — who receive the most severe and most frequent blows to the head — as well as police, soldiers, snowboarders and anyone who wears a helmet or hard hat. And yes, cyclists, too.

Most people think that a concussion — a bruise to the brain — is the most dangerous type of trauma, but a twisting motion is just as bad, because it can tear brain fibers. While beefy linemen develop strong necks that can withstand a limited amount of torque, children and adolescents — including most high school football players — do not.

“A direct linear impact to the head certainly is not good, but in addition, there are rotational forces that twist the brain. It’s like in boxing, where one roundhouse punch comes in, the head turns, and they are out,” Knight said. “That’s because the brain is just not designed to take rotation; you end up with damage to critical connecting fibers in the brain.”

Eight years ago, he founded a company, BrainGuard, to develop the new helmet design and attract interest from major helmet manufacturers. So far, he and his four-person team have produced prototype football, hockey, baseball, bike, motorcycle, sports utility and snow-sport helmets.

“Because I am a neurologist, I would like to see something out there that improves the quality of life of people by diminishing traumatic brain injury and its resultant effects on the brain and emotional and cognitive and behavioral function,” said Knight, former head of UC Berkeley’s Helen Wills Neuroscience Institute. “That is my hope.”

UC Berkeley’s head football equipment manager, Tim Feaster, first tried on the helmet a year ago, when he was assistant equipment manager with the Oakland Raiders, and subsequently helped Knight get it onto the heads of a couple of Cal players, who liked it, Feaster said.

“I think the technology is incredibly fascinating,” he said, adding that he would “absolutely” offer the football helmet to his team once it’s certified. “I have never seen anything like it: an outer shell that moves over the inner shell was intriguing to me. It was so inventive, it made sense the way it moved. I thought they might actually have something here.”

Feaster admitted that a player’s choice of helmet — currently Cal football players can select from more than 15 styles from four manufacturers — is often more about esthetics than safety. And concussion is the main concern.

“But I am all for getting guys to at least try it, if I believe in it,” he said. “Any way that a new technology can at least limit the damage, I am all for it.”

TBI, world’s leading cause of death and disability

Knight quotes startling figures on the extent of traumatic brain injury (TBI) in the United States. The Centers for Disease Control and Prevention tracked 2.9 million Americans affected by TBI in 2014, primarily from falls and motor vehicle crashes. While most of the injuries were mild concussions, the total included 288,000 hospitalizations and 57,000 deaths. The World Health Organization estimates that TBI will be the leading cause of death and disability in the world this year.

Yet, these figures don’t account for many sports-related concussions that don’t result in an ER visit but force a player to sit out the rest of the game. The Brain Injury Research Institute estimates there were 135,000 sports-related concussions in individuals ages 5 to 18 between 2001 and 2005. While concussion symptoms — headache, nausea, fatigue, confusion or memory problems, sleep disturbances and mood changes — typically go away, the cumulative effect of repeated mild concussions could be grave.

“Most people think that the inside of the skull is a nice smooth container, like an eggshell, holding the precious brain,” he said. ”It’s not true. The inside of the skull is filled with all kinds of bony ridges that can be quite destructive, similar to if I hit you in the arm, and you get a bruise. But if you bruise the brain, the blood kicks off a cascade of reactions that actually kill brain cells.”

When bruising happens again and again, even without a concussion, a person can get chronic traumatic encephalopathy (CTE), a condition that has sparked controversy over the past decade and was the subject of the 2015 movie Concussion that starred Will Smith.

Especially in football linemen, CTE has led to an epidemic of early dementia, mood alterations and even suicide among retired professional players. In one study of 202 former football players whose brains were donated after death, 3 of 14, or 21% of those who had played only in high school, showed evidence of CTE. Of those who played football in college, 48 of 53, or 91%, had CTE. Of NFL (National Football League) players, 110 of 111 had CTE.

“That is the big gorilla in the room for the NFL and the NHL (National Hockey League),” Knight said. 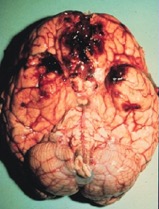 Yet, while contusions and blood clots in the brain are a big problem, equally damaging are the tears that occur when brain fibers are wrenched and twisted.

“The brain operates by one cell sending on its connecting fiber through an axon to signal another cell,” he said. “When you get these complex twisting and rotational forces, you get compression, tension and shearing, and you can actually mechanically damage and tear your connecting fibers.

The best helmets today, including those used by the NFL, include padding that does a decent job absorbing energy from a direct head collision and preventing the full force of the hit from reaching the brain. But they don’t account for hits that snap and rotate the head. The outer shell of Knight’s football helmet is able to rotate about an inch relative to the inside shell, which is strapped to the head; this absorbs the dangerous torque that can cause permanent brain damage. More spherical helmets, like those for bikes and snowboarders, could rotate about an inch and a half, absorbing even more rotational energy, he said.

To allow this helmet rotation, Knight places compact plastic struts between the inner and outer shell. The struts allow the outer shell to slide relative to the inner shell strapped to the head — essentially a rotational shock absorber.

Knight and BrainGuard CTO Ram Gurumoorthy, who has a Berkeley Ph.D. in engineering, say that their design adds no extra weight or thickness to a football helmet, and that many helmet models today could be retrofitted by adding the new outer shell and struts. The design, which also includes a lighter, carbon-fiber face mask, can be adapted to any sport or recreation: climbing, off-road and all-terrain sports, as well as baseball, lacrosse, rugby and water polo, one of the most dangerous sports for concussions. The same inner shell with an interchangeable outer shell also works for industrial helmets and for firefighter and military helmets.

“The beauty of the helmet is that it is a modular platform, which means the innards — the inside attached to the head — remain the same or quite similar, and the outside shell alone can change, depending on the sport,” Knight said.

BrainGuard’s football helmet passed the mechanical performance requirements as specified in National Operating Committee on Standards for Athletic Equipment in November, a first step toward offering it to high school, college and professional teams. The company is now setting up a small manufacturing line to produce about 1,000 football helmets — enough to test the design with a few high school and college teams, once the manufactured helmet has been certified — and looking for investor money to pay for injection molds and manufacturing lines for bicycle, motorcycle and snow-sport helmets.

“I want to emphasize that the football helmets on the market today are effective. What we are trying to do is make them more effective,” Knight said.

At their company’s garage in an industrial park in Point Richmond, California, Knight and Gurumoorthy have built a state-of-the-art helmet testing machine to compare BrainGuard with commercial helmets. Knight says that the new design is 25 to 50 percent better than any on the market, in terms of damping rotational forces. Their design is particularly effective for frontal hits that contribute to CTE, which starts in the frontal lobe, Knight said.

“Our helmet can reduce the rotational force by up to a half, but you don’t eliminate it. This is not a panacea; we are reducing the influence of blows to the head,” he said.

More effective means of reducing traumatic head injuries would be to ban tackle football for kids under age 13 — many play in the Pop Warner Little Scholars Inc. leagues — and to change the way older players use their heads during practice and play. Unless contact sports are banned, which is unlikely, a better helmet will at least reduce the number of concussions, the damage from repeated subconcussions and the chances of developing CTE.

“I am most worried that if you put out a better force-reduction helmet, people are not going to pay attention to other things they should be doing to reduce force to their heads, like reducing or eliminating helmet-to-helmet contact,” he said. “My dream is that someday, my 8-year-old granddaughter is going to be wearing a bike helmet that is well designed, so the one time she falls off her bike, she is going to get a dramatic decrease in the chance of her getting a serious brain injury.”