From his corner office in Stanley Hall, Harry Stark peers at a crude but colorful diagram displayed on his computer monitor. To the untrained eye, its blue rectangles, arranged in stacked rows, resemble a calendar page. For Stark, each shape corresponds to one of Stanley’s massive air-handling units, telling him just how much air, in cubic feet per minute, the machine is moving through the research hub.

Stark has reason to be keenly interested in this real-time snapshot of the building’s performance. He directs facilities and engineering for the building’s tenant, the QB3 Institute, and has been tapped to serve as liaison between the Office of the Vice Chancellor for Research and those who manage up to 30 buildings serving the campus research enterprise. All of which puts him on the front lines of a new effort to conserve energy and funds, and reduce greenhouse-gas emissions, at Berkeley.

The Energy Incentive Program, as it’s named, encourages reduction in electricity usage through energy-saving measures by building occupants as well as building managers like Stark. It’s one part of Operational Excellence’s work to save the campus $75 million annually — $500,000 of that by putting it on a kilowatt diet. (OE’s Energy Management Initiative includes four programs in all, which together aim to generate $3-4 million in annual energy savings.)

As its name implies, EIP aims to shift the campus culture from what’s termed a “free-energy” mentality to a “vested-interest” mentality by means of a powerful incentive: money.

In the past, UC Berkeley operating units “never really paid attention to their energy consumption in the buildings,” explains Chuck Frost, manager of the campus’s newly established energy office, based at 2000 Carleton St. “It was a non-issue because it didn’t come out of their budgets,” but instead was paid out of central-campus funds.

Faced with the possibility of reaping reimbursements, and the threat of overage charges in the future, campus staff and faculty are looking for ways to cut electricity usage.

In Stanley Hall’s cavernous basement, Stark is having sub-meters installed on some of the main electrical-distribution panels. “I want to be able to know what percentage of energy consumed in this building is attributable to lights and plugs,” he says. “Those are the things that users have control over.”

Recently, researchers in the Energy and Resources Group, based in Barrows Hall, “noticed a large increase in building ‘base load’ demand” visualized on a Pulse dashboard, recalls assistant professor Duncan Callaway. They reported the uptick to the energy office, which “researched the observation and found that some equipment had been turned on for construction,” he says, “but was not being turned off at night when it was not being used.”

This oversight could have cost as much as $45,000 in a year if it had continued undetected, the energy office estimates. Instead, the equipment settings were changed and Barrows’ electricity usage instantly dropped.

It’s the job of the energy office — set to include a team of skilled technicians, engineers and an energy analyst, when Frost is done hiring — to investigate these kinds of usage spikes and to help keep energy-efficient buildings (including those that have reaped reimbursements under the Strategic Energy Program, a partnership between UC and PG&E) in tune.

Those seeking to pare down kilowatt consumption through low-cost changes are encouraged to check the myPower website for tips, or arrange to have a student team, trained to evaluate electricity usage, visit their office or lab and send back a report and recommendations. (To schedule a survey, e-mail myPower@berkeley.edu.) 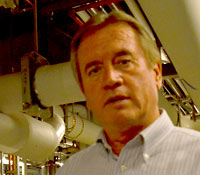 Getting buildings to working optimally for occupants and researchers has been Chuck Frost’s mission for most of his adult life.

A 32-year UC employee, he kept facilities humming at Lawrence Livermore National Laboratory for 28 years. In 2008 he transferred to Berkeley, where he was responsible for 10 buildings housing chemistry and physics research. In January he took on a new challenge as the campus’s first energy manager.

Frost has simultaneously spent more than a decade teaching evening courses at Laney College on heating, ventilation and air-conditioning (HVAC) systems, as well as the digital-control systems used in large, modern commercial and research buildings.

“Buildings are changing,” he says. In older buildings, occupants may control temperature by opening radiators or windows, and facilities staff log read-outs from gauges in the basement. In newer facilities, “it’s all computerized,” Frost notes — with temperatures and pressures set, adjusted and monitored using digital control systems. A new generation of workers, armed with computer know-how as well traditional HVAC skills, is needed to operate these complex facilities.

The U.S. Energy Dept. estimates that buildings account for 40 percent of the nation’s energy consumption. For Frost, that’s a powerful statistic — lending a sense of mission to his dual role as energy manager and teacher.

“My oldest grandchild is 5,” he says. “I started to look at what a mess we’re leaving for future generations. I think if everybody does their part, we can make a difference.”

Frost is especially upbeat about the convergence of will and expertise at Berkeley — where “conditions are right for doing something really special,” he believes. “We have a base of talent here — faculty and students who really want to save energy.”

That has changed. Now, each operating unit is accountable for its own kilowatt consumption. In anticipation for the switchover, electricity usage was audited for a year, from mid-2010 to mid-2011, to establish a baseline for each central-campus building and a handful of state-funded facilities beyond the campus perimeter. (For buildings that house more than one operating unit, each group’s energy use is estimate based on what percentage of the building it occupies.)

This fiscal year, which began July 1, “if you can beat your baseline, we will give you back the savings,” Frost explains. Next fiscal year, “it can go either way. Units will continue to receive money if they beat their baseline, while those that go over their baseline would owe the difference.” (Research programs will not be penalized for expansion, he adds.)

Frost has little interest, however, in exercising the “stick” end of EIP’s carrot-and-stick approach. “Putting the bill in their hands” may be needed in order to “get the attention of the operating units,” he says, but the real goal is “to give money back. That’s going to be fun.”

To that end, his office issues monthly electricity-usage updates to each operating unit. “We don’t want anyone getting blindsided,” he says. “We’re focused on identifying if energy consumption is creeping up, and we work with the operating units on how they might save money.

“My role, and the role of the energy office,” he insists, “is to head off trouble.”