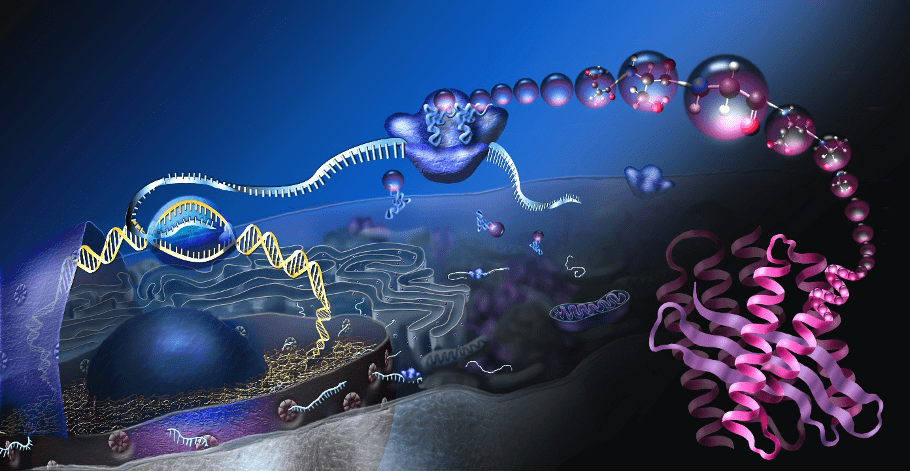 Madeline Zoltek, a graduate student in the Schepartz Lab at QB3-Berkeley, explores how a new Center for Chemical Innovation is harnessing the chemistry of a living cell to design novel chemical polymers.

Aerosols that can act as solar panels. Bulletproof vests as light as nylon. Biodegradable plastics. UC Berkeley was recently awarded $20 million to establish a National Science Foundation (NSF) Center for Chemical Innovation with a deceptively simple goal: use the chemistry from living cells to produce brand-new materials with applications limited only by the imagination.

This Center for Chemical Innovation, called the Center for Genetically Encoded Materials (C-GEM), aims to design chemical polymers whose sequence and shape can be precisely controlled to create materials with far-reaching applications. Directed by UC Berkeley chemistry professor Alanna Schepartz, C-GEM has set out to reimagine the way polymers are made by taking cues from the sequence-defined molecules invented by evolution: proteins. This would offer scientists an unprecedented level of control over the structures of polymers—the chemical building blocks of everyday items such as nylon, polyester, Teflon, and more—that could result in entirely new materials.

“No one actually knows what functions would arise from a polymer where you had some control over the primary sequence, because no one has ever made molecules that look like that,” says Schepartz.

To accomplish their goals, C-GEM is taking cues from the elegant machine designed by evolution to make proteins: the ribosome. Ribosomes are the workhorses of the cell, capable of translating instructions for protein sequences into diverse three-dimensional shapes. Unlike proteins that are manufactured in the cell, however, polymers are assembled in a lab, and they suffer a critical weakness—they cannot be designed with a defined sequence. C-GEM’s question, then, is straightforward: can a ribosome be re-purposed to make a chemical polymer?

“Ultimately, the ribosome did not evolve to do this,” says Yale University chemistry professor and C-GEM senior investigator Scott Miller. Miller is leading a team of scientists at Yale to investigate how the ribosome might form the chemical linkages connecting a polymer together. You can think of proteins and polymers as a series of beads on a string. In the cell, the length and combination of beads for a protein is specified by an instructional handbook known as DNA. Encoded in this sequence is all the necessary information for the protein to fold into a unique three-dimensional shape. Proteins can reach lengths of over 30,000 beads, leading to essentially limitless possible structures – and therefore limitless functions. “Proteins have the functions that they do because they are sequence-defined molecules,” explains Schepartz. “If they weren’t sequence-defined, they wouldn’t be able to support life.”

To convince a ribosome to read a sequence for a chemical polymer is a mammoth task. The beads making up polymers can look tremendously different from the beads used by the ribosome to make a protein. The string connecting the beads can be different too – polymers are connected using diverse chemical linkages that the ribosome doesn’t build naturally in the cell. Though daunting, solving these challenges will have enormous implications on the types of materials that we could make. “What it will deliver,” explains Miller, “is really imagination-limited.”

With the $20 million recently awarded by the NSF, imagination can start to become reality. UC Berkeley chemical and biomolecular engineering professor Markita Landry recently joined the team to adapt these new chemical polymers for her research on nanomaterials as bio-sensors.

“We can implant sensors into the brain extracellular space and image how cells are communicating with neurotransmitters like dopamine,” explains Landry. Landry’s team is interested in using polymers that can specifically recognize different molecules involved in how brain cells communicate with one another, especially in processes like addiction. However, the lack of control over polymer sequence limits the specificity and types of sensors that can be made. “We’re hoping to expand the repertoire of polymers that we can use for our own molecular recognition purposes, and develop sensors that are more bio-compatible,” says Landry.

Sequence-defined polymers could have impacts on an enormous range of other fields. Researchers could design more stable therapeutic proteins to improve their use as drugs. Engineers could build more efficient and conductive solar panels. Perhaps textile companies could even manufacture clothing as durable as Kevlar but as light as nylon. And while these applications are alluring, it is equally important to appreciate C-GEM’s mission as an ambitious foray into more deeply and fundamentally understanding the chemistry of the cell.

“There are no applications without basic discoveries,” says Miller. Any monumental scientific advance in history has stemmed from breakthroughs in understanding fundamental processes. Antibiotics were made possible by pioneering work in the 60s on bacteria; vaccine development is indebted to essential discoveries during the “golden age of molecular biology” in the 1980s. In much the same way, C-GEM’s mission is to gain fundamental insights into the chemistry of the ribosome in order to spur a new wave of innovation.

“The hope is that we begin to be able to make compounds that no one has been able to make before, and understand the processes by which they are made. Then people will come to us with really cool applications,” says Schepartz.

The ambitious goals of C-GEM demand a highly collaborative and interdisciplinary team. The recent NSF award allowed C-GEM to expand to include investigators at six institutions across the country, with research expertise ranging from synthetic chemistry to structural biology and everything in between. The impressive intellectual diversity of the team will drive on the next stages of the project: re-coding the DNA instructions to make a chemical polymer, and re-purposing the ribosome to read and translate this new code in a living cell. A ribosome-friendly polymer code would enormously expand the repertoire of beads that could be used to make a polymer, yielding nearly limitless potential three-dimensional shapes that could transform the types of materials we could make.

Diversity in teams like this is a key element to scientific success. Diverse teams solve problems more innovatively, have more thought-provoking discussions, and publish higher-impact research than non-diverse teams. A crucial objective, therefore, of C-GEM’s mission is to improve scientific representation and communication both among scientists and with the public. The team’s expansion afforded by the recent award includes hiring Chrissy Stachl as Director of Education, Outreach, and Diversity for C-GEM.

“I’d like to integrate developing outreach programs with making sure that they’re working to their full capacity,” says Stachl. C-GEM’s outreach initiatives are broad. Graduate students on CGEM projects participate in local outreach to improve science education for middle and high school students in the neighborhoods of C-GEM affiliated institutions, like Bay Area Scientists Inspiring Students in Berkeley. C-GEM students at Yale hosted a week-long “Decoding Biology” workshop where students interactively explored the chemistry of polymers. Under Stachl’s lead, these initiatives will expand to include broadening participation of students from minoritized backgrounds in chemistry at the collegiate level. Stachl hopes to establish structured mentoring programs in C-GEM labs where undergraduate students can obtain funded research experience. Critically, Stachl is working to build the necessary infrastructure to both recruit students from diverse backgrounds and ensure they have adequate support and mentorship in their labs throughout their time with C-GEM.

C-GEM has taken their commitment to public engagement one step further by harnessing crowd-sourced data collected through a program called Eterna. Started by C-GEM senior investigator Rhiju Das in 2011, Eterna is an online puzzle-solving game where players design molecules called RNAs to match criteria provided at different levels of the game. RNA is a critical component of the ribosomes that make sequence-defined proteins. By manipulating what these RNAs look like, players in Eterna provide valuable insight into the function of the ribosome, and how we may be able to manipulate that function to make a chemical polymer instead.

With more than 140,000 players registered today, Eterna has amassed an enormous following of citizen scientists who have contributed to RNA projects with C-GEM and beyond. The game is incredibly interactive – after players complete a challenge, they vote on the submitted designs to choose the RNAs they deem best-suited to the goals of the challenge. Scientists actually make and experimentally test the winning RNA designs, and feed the results back into the game for players to improve upon. In effect, Eterna is crowd-sourcing RNA design – and the results have far out-performed any computer algorithm with the same goal to date.

Retired software consultant Roger Wellington-Oguri began solving puzzles with Eterna as a player back in 2012. Now he is a member of the Eterna team working to improve the interface between players and scientists in the labs. In 2019, he was the lead author on the first peer-reviewed scientific publication written entirely by Eterna players – not one author was a trained academic scientist. According to Wellington-Oguri, the appeal of Eterna lies in its collaborative environment. Players work in sync with one another and with scientists to contribute to scientific discovery and innovation together, bridging the often prohibitive gap between scientific research and public engagement.

Involving the community with their research is a primary tenet of C-GEM’s mission. “The support of science in our country is largely a public trust,” says senior investigator Scott Miller. By integrating outreach efforts with accessible learning opportunities like Eterna, the C-GEM team hopes to establish transparent science communication with the public.

Reflecting on C-GEM’s successes as the team moves forward, Schepartz recalled that the project did not start so auspiciously. The original team was denied funding for their first proposal after countless hours of diligent effort and meticulous planning. Rather than abandon the project, Schepartz and her team put together an evolved proposal to the NSF – and won it. “The beauty is that from failure arose an extremely cohesive, synergistic, collaborative, and supportive team, and I think that’s what the NSF saw,” says Schepartz.